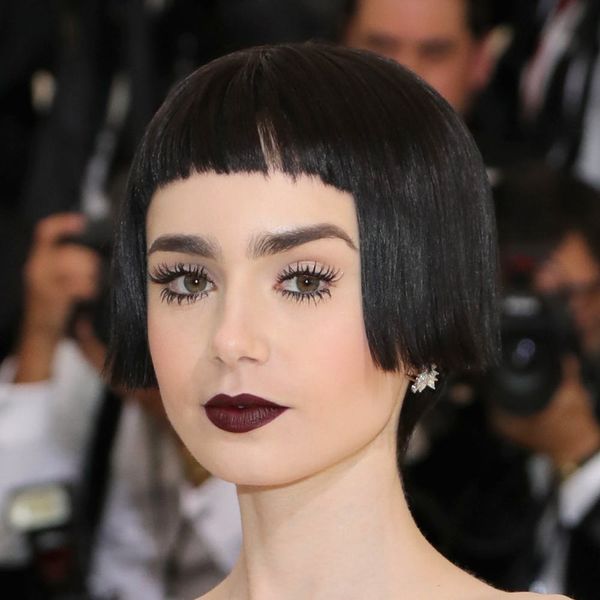 If you’ve been following the 2017 Met Gala, you know that tonight’s theme is all about fashion house Comme des Garçons and its Japanese founder Rei Kawakubo. One by one, the stars came out in looks that were supposed to be an ode to her innovative designs, with intriguing (if controversial) looks that rendered them nearly unrecognizable. They weren’t just paying tribute to the designer with their fashion choices, however: They were speaking volumes with their hairstyles too. Similar to Gala chair Anna Wintour, Kawakubo’s blunt, black bob has become a part of her identity at this point, known to anyone who’s anyone in fashion, and tonight, they showed it by emulating her signature coif.

As Vogue pointed out, it’s a style that’s been steadily making a resurgence as of late, as seen on the runways of Alexander Wang, Prada, and Proenza Schouler for NYFW. Tonight, it was in full-on domination mode, however, as everyone from Evan Rachel Wood and Bella Hadid to Lily Collins and Kerry Washington donned the iconic hairdo. Check ‘em out below.

1. Lily Collins: Lily Collins was TDF in her blunt, cheek-length, baby-banged bob snipped just above her ear lobe. While our money’s on a wig, it was a wig done right. (Photo via Neilson Barnard/Getty)

2. Kerry Washington: The Scandal star was right on trend with the evening’s must-have look, going for classic with a shorter, straighter version of her naturally dark-tressed lob. (Photo via Dia Dipasupil/Getty)

3. Evan Rachel Wood: Never one for convention (you may recall her Golden Globes tux in a sea of ballgowns), Rachel Wood went for a blue-tinged, sideswept version of the cut with matching gray-blue shadow to match. (Photo via Dimitrios Kambouris/Getty)

4. Rose Byrne: Byrne put her own spin on the evening’s hottest hair with a DEEP side part and volume for days on her teased, ombred curls. (Photo via Dia Dipasupil/Getty)

5. Bella Hadid: While Hadid’s eye-popping see-through ensemble was sure to keep most of the focus on her below-the-neck style, the supermodel gave a subtle and chic nod to Kawakubo in the hair department too. (Photo via Neilson Barnard/Getty)

6. Kim Kardashian-West: Kardashian-West rocked a clean, neatly trimmed version of the healthy ‘do she maintains on the reg with vitamin hair masks, now just barely grazing her collarbone. (Photo via Dia Dipasupil/Getty)

7. Grace Harzel: Model Hartzel COMMITTED to her dramatic goth beauty transformation with a spiraled spin on the Kawakubo bob, watercolor eyes, and a whole lotta eyeliner. (Photo via Neilson Barnard/Getty)

8. Grimes: The “Medieval Warfare” singer was a dead ringer for Kawakubo in her younger days hair-wise, looking sleek and chic in a presumed layered hairpiece. (Photo via Neilson Barnard/Getty)

Who do you think rocked their bob best? Tell us over @BritandCo.

Nicole Briese
Nicole is the weekend editor for Brit + Co who loves bringing you all the latest buzz. When she's not busy typing away into the wee hours, you can usually find her canoodling with her fur babies, rooting around in a bookstore, or rocking out at a concert of some sort (Guns N' Roses forever!). Check out all her latest musings and past work at nicolebjean.com.
Celebrity Hair
Beauty News
Celebrity Hair Red Carpet