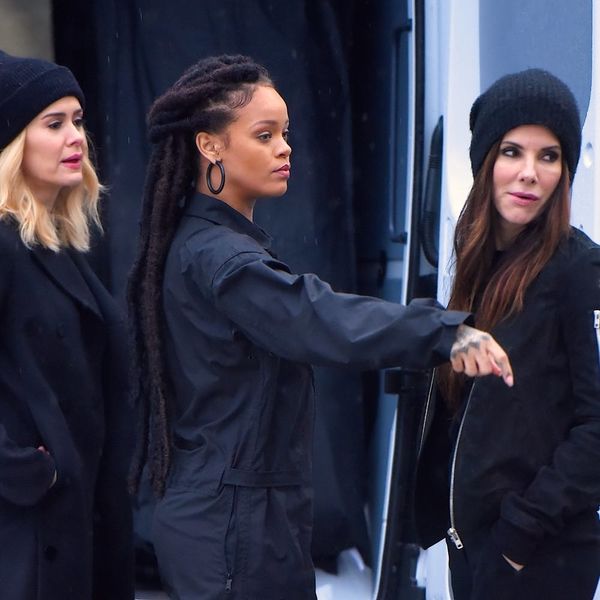 Movies with strong women-centered casts may be getting more and more common (woo!), while still stirring up plenty of controversy (boo!), and while the new Ghostbusters movie was a remake of the original, the new take on Ocean’s 11 is a lady-fronted addition to the already existing and super popular film franchise. As if we weren’t already excited enough, now we’ve been given our first peek at Sandra Bullock, Rihanna, Mindy Kaling and the A-list team of celebs that make up Ocean’s 8.

The newest pic released by the studio shows the crew on an NYC subway car, and we can only assume they’re all busy plotting and planning their epic criminal endeavor. They’re also looking fabulously slick and more than a little serious — this is definitely a team that’s worth reckoning with.

Various behind-the-scenes pics have also cropped up, showing the team ready for some serious action (while obviously having a whole lotta fun). Warner Bros. official statement says, “The tide will turn as Debbie Ocean (Sandra Bullock) attempts to pull off the heist of the century at New York City’s star-studded annual Met Gala. Her first stop is to assemble the perfect crew…”

Other than that, we know the story will include the annual star-studded Met Ball (as mentioned above) and will see cameos by event-staples Anna Wintour, Alexander Wang and the Kardashian-Jenner sisters.

Another fact that we can fill you in on is the release date which, unfortunately, isn’t until June 8 of next year. NEXT YEAR. Yep, we still have quite a while to wait, but by the looks of it, it will surely be worth our devoted patience.