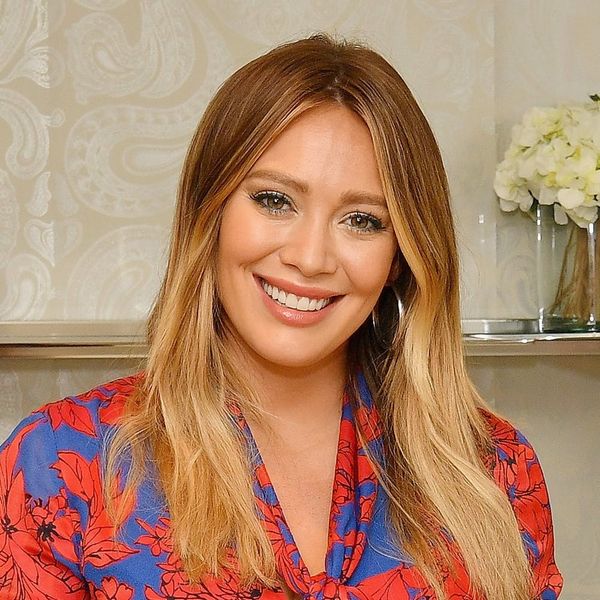 Hilary Duff is pregnant and expecting a baby girl with boyfriend Matthew Koma, and although her son, Luca, is warming up to the idea of becoming a big brother, the actress says he wasn’t initially on board with having to share his mom.

“He’s excited. He was not thrilled in the beginning, but now he’s excited,” she told Brit + Co during an interview to promote Jif Peanut Butter’s “Imagine If, With Jif” contest. “I think he was just like, ‘Wait, what? You’re mine.’ Six years is a long time to just have your mom and dad. He was comfortable in his life, and now he’s like, ‘Is this a joke?’ But I try to explain to him, even as heavy as it gets, that I’m not going to be here forever, and that family means a lot and it’s good to have siblings.”

“He’s such a kind, gentle, sensitive guy,” she added. “I think he’s going to be really obsessed with her. He’s just like, ‘I don’t want drool on my toys.'”

Duff, for her part, can’t wait to welcome the little one. “I feel ready ’cause I’m tired of being pregnant,” she quipped. “I forget how to have a newborn, but I think just like with Luca, you figure it out. And Luca’s six, so he’s going to be able to help me a lot.”

For now, the Younger star is just savoring the one-on-one time she has with her son. “We have a ‘portal’ in our garage that takes us to different places and different universes,” she told us. “We do a lot of imaginative games. He has a really good imagination.”

Incidentally, imagination is at the heart of Jif Peanut Butter’s “Imagine If, With Jif” contest, which Duff helped to announce earlier this week. The contest challenges kids to use their creativity to come up with projects that will make the world a better place. One winning project will receive a $15,000 grant.

“Having a six-year-old and being pregnant with a new baby on the way, I was just really inspired by the work Jif is doing to nurture children’s creative ideas,” Duff said of how she got involved, adding that she “lived on peanut butter and jelly sandwiches” for the first three months of her pregnancy. “I love the creative mixed with the entrepreneurial aspect. And Jif granting a kid $15,000 to make their dream come true? Those resources are really hard to come by for parents and kids. And it’s great just getting to hear all the inspirational stories of kids doing things and using their powers for good to try to inspire other kids or comfort other kids.”