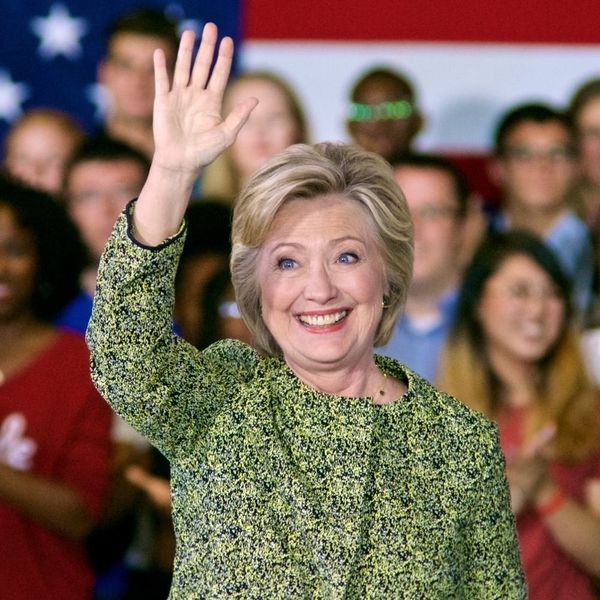 A year after the resurgence of the #MeToo movement, Hillary Clinton has chimed in about her husband’s infamous affair. On CBS’ Sunday Morning this weekend, Clinton said that the sexual relationship between former president Bill Clinton and his then-intern, Monica Lewinsky, did not involve an abuse of power because Lewinsky “was an adult” at the time of the affair.

True, Lewinsky was an adult. She was also 22 years old and working without pay in the White House for the Clinton administration. Bill Clinton was an adult, but also president of the United States — making him very much Lewinsky’s boss.

Lewinsky herself has never contended that the affair Clinton had with her was non-consensual on her part, but it should be pretty obvious that the two were not exactly operating on the same playing field: He was one of the most powerful people in the world and she was an unpaid staff person, fresh out of college.

The affair between Clinton and Lewinsky certainly can’t be conflated with stories of sexual assault and rape that are being shared publicly more and more thanks to the resurgence of the #MeToo movement. And, in the two decades since her affair with Clinton, Lewinsky has come to recognize the inappropriate imbalance of power inherent to the relationship. The affair wasn’t just an affair, but “littered with inappropriate abuse of authority, station, and privilege. (Full stop),” Lewinsky wrote for Vanity Fair earlier this year, when considering the life-changing ordeal through the lens of #MeToo. She acknowledges that she consented to a sexual relationship, but explains that the consent was “complicated,” and influenced by Clinton’s role as an authority figure.

For Hillary Clinton to insist that being at least the age of majority is the only determining factor in whether or not a person was treated fairly and with dignity in a relationship is perplexing. Clinton never missed an opportunity to tout her resume as an advocate for women and girls during her presidential campaign, and (rightfully) made a point to note the sexism that was leveraged against her while she ran for president. That’s why Clinton really ought to know better that issues of consent can be complex, and that there are various ways for powerful people to wield their power over others.

There’s another uncomfortable truth illuminated by Hillary Clinton’s “she was an adult” argument: There is nothing about turning 18 that makes a person invulnerable to manipulation, coercion, or generally being taken advantage of by those who have more power than they do. That Lewinsky was 22 (and the president was 49) does not negate the vastly unequal power dynamics between an intern and a boss.

The issue here is not age, as Hillary Clinton suggested on Sunday. Rather, as Lewinsky sees it, she was never in a position to consent to sexual activities with her boss, the president.

“I now see how problematic it was that the two of us even got to a place where there was a question of consent,” she wrote in the Vanity Fair essay. She also stressed that she had a “limited understanding” of what the consequences of the affair would be, while Clinton “was 27 years my senior, with enough life experience to know better.”

The #MeToo movement has opened up more space in the public sphere to discuss all kinds of issues related to consent, sex, and workplace power dynamics. For Clinton to dismiss Lewinsky’s own version of the events as she experienced them, particularly when there was a clear and massive difference in the amount of leverage each of them had in the relationship, undermines the work others are doing to confront and dismantle sexism and other abuses of authority in the workplace.

For her part, Hillary Clinton has staunchly stood beside Bill, defending his honor and the legitimacy of his presidency despite the fact that he lied under oath about his relationship with Lewinsky. This doesn’t exactly jibe with Hillary Clinton’s branding as a feminist and champion for women’s and girl’s issues. Shouldn’t someone who has spent their career defending women have more to say about an especially unequal relationship between a boss and an employee?

If Clinton wants to stand by her man, that’s fine. She has a right to do so. But defending her husband does not require that she undermine the experience of Monica Lewinsky, who endured (and still endures) humiliation, condescension, and harassment because of the affair. Bill Clinton, meanwhile, has said he does not feel he owes Lewinsky an apology for his role in all of this.

Lewinsky has taken full responsibility for her role in the affair, and has spoken out passionately on behalf of survivors of sexual assault and sexual abuse, as well as victims of harassment and bullying. Perhaps Hillary Clinton should take a cue, and focus on people who are taken advantage of and abused by those in power, instead of attempting to rewrite another woman’s experience.