How I Empowered My Short Daughter — And Myself, Too — to Feel Confident 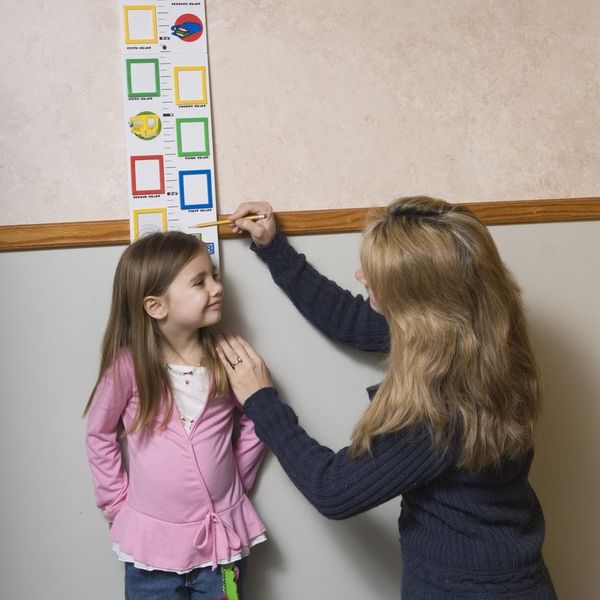 I’ve always told my daughter Hayley that she was smart, beautiful, and deserving, and as a toddler, she embraced the “all girls can” sentiment. For her, “no” was just a starting point — she didn’t let anyone or anything stand in the way of her success.

But Hayley’s beliefs about herself changed in an instant when she was just three years old. I remember that spring day like it was yesterday.

“I don’t want to go to school anymore,” she cried, as she stretched out her tiny arms as wide as they would go. “I’m the shortest one in the class and all my friends are much bigger and better than me!”

It turned out that her preschool teachers had hung up a growth chart in the classroom so the kids could track their growth over the course of the school year. But that innocent activity had very real implications for Hayley, who only saw herself as a masking-tape marking at the bottom of the chart, with no other names in sight. For the first time in her three years of life, what she articulated to me were feelings of shame.

I knew Hayley was short — her pediatrician always pointed out during routine check-ups that while she was healthy and developing, she’d never quite been on the growth chart for her age. But I hadn’t thought about it much until that fateful afternoon.

Let’s face it: Today’s world is filled with bullying, intolerance, and hate, and when it comes to discrimination, height isn’t necessarily an issue we think about. But it doesn’t mean this type of judgment isn’t real.

“I don’t like being called munchkin or peanut,” she told me. “It hurts my feelings.”

Being 5’1″ on a very good day (with heels and volumized hair), I related to Hayley’s predicament all too well. Growing up, I was always the shortest kid in class. All too often, I felt the sting of gym class rejection when it was time for captains to pick teams. Sometimes, I still have nightmares that I’m that sad little girl again, sitting with my fingers and toes crossed and hoping that I wouldn’t be last pick.

These feelings were also very real in high school, when I was asked to show identification for seeing R-rated movies, while my friends were led right into the theater. At times, I was even handed the kids’ menu at local restaurants when I was well beyond the 12-and-under cutoff. This type of height bias continued for me well into my college years, when bar bouncers scrutinized my ID under a special blacklight to ensure it wasn’t fake.

Thinking further about Hayley’s feelings and my own experiences, I realized that as a society, we are accustomed to perceiving short stature as a negative — a reason to take a person less seriously.

I racked my brain to think of books, movies, and television shows with a short heroine. Much to my surprise, I could not come up with even one. Instead, what did come to mind were tons of characters who had special abilities precisely because they were tall, like Wonder Woman and Elastigirl from The Incredibles.

And when it comes to height in the workplace, studies prove that standing tall pays off — literally. According to a study in the Journal of Applied Psychology, each inch above “average” is worth approximately $789 per year.

The recent mayoral race in Chicago, where I live, also shed light on how people view height from a political perspective. While Lori Lightfoot made history for being Chicago’s first openly gay and first Black female mayor, she couldn’t get through press interviews without questions jokingly arising about her height (like me, she’s 5’1″), when the race for office was about much bigger issues for the city. During her acceptance speech, she even alluded to the scrutiny she faced for being short, saying, “They’re seeing a city reborn…where it surely doesn’t matter how tall you are.”

The statement made by Lightfoot was both something I wanted to tell Hayley, and something I refused to acknowledge because it was absolutely ridiculous that discrimination on the basis of height was even a thing. But here we were.

The American Academy of Experts in Traumatic Stress believe that bullying has a real and profound psychological impact into adulthood. The saying, “Sticks and stones may break my bones, but names will never hurt me,” rings untrue. For the most part, physical damage from a fight heals quickly, but words can cause lasting damage to a child’s self-concepts and identity.

While I knew the comments made about Hayley’s height were innocent and playful, and even endearing at times, I worried that being labeled as short would cause her to lack confidence at a crucial time in her emotional and social development.

So I began to empower her by talking to her about the advantages that only she had because of her height, framing it in a fun way that would make her feel special. For example, she is the last one to get wet when it rains, and she can still manage to squeeze in the race car carts at the grocery store.

Additionally, we focused on acceptance and perseverance. “Worry about being the best Hayley,” I frequently told her. “Today’s Hayley should learn from yesterday’s mistakes.”

Changing her mindset was no easy feat, but over time, it got easier — especially once I realized I had to model the attitude I was trying to teach her.

Hayley takes cues from me. She watches me get ready every morning, and I know there have been times I’ve told her I needed to wear my high heels because I had an interview or an important meeting to attend. While I have never believed that height equates self-confidence, it occurred to me that, on some level, I was basically telling my daughter to stock a closet full of pumps because that was how I’d been conditioned to think.

Now, at 35 years old, I am retraining my brain to put the notion of short and tall on a level playing field. I talk to Hayley about how to accept herself and continue to point out her advantages and celebrate her differences. While Hayley measures about three inches below the growth curve for a child her age, she is not short on confidence. Together, we’re learning.

Lori Orlinsky is a writer, children’s book author, and marketing director who lives in Chicago. She is the mother of two little ladies. Her book Being Small (Isn’t So Bad After All) is out on April 16.