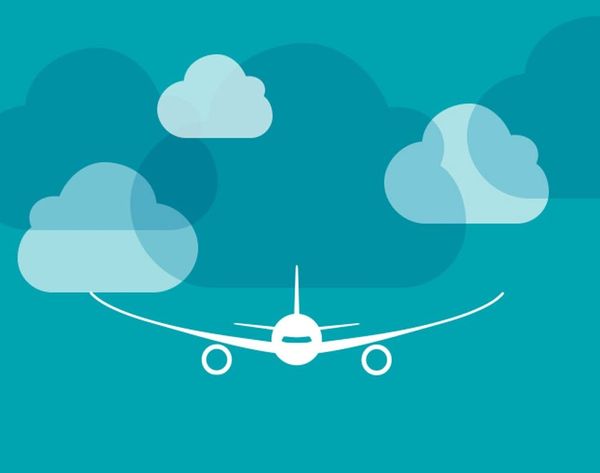 Let’s face it. When it comes to airline ticket pricing, there is no crystal ball. It can be hard to navigate around all the myths, like the importance of buying tickets 54 days in advance, making your purchase on a Tuesday by 3 pm, flying out on Wednesday or when there’s a full moon. The truth is, airlines are unpredictable, but savvy travelers use a range of tactics to score cheaper fares, and we’ve got some great hacks for you to take flight without breaking the bank.

1. Use Online Fare Tools: Don’t play musical airlines. Keep yourself current by using the Internet’s top tools for uncovering when and where to fly for the cheapest fare. May we suggest Hopper, Google’s Flight Explorer or Kayak’s Price Trend feature. Seriously, let them do the work; they’re pretty good at it. (via New York Times, photo via Hopper)

2. Set Up Flight Alerts: It really pays to plan ahead, if your little black book is booked from now until Christmas, sign up for flight alerts to be sent directly to you. This way you’ll know when prices drop so you can make your purchase. (via Flight Stats)

3. Hawk-Eye Twitter: Use social media to follow airline feeds, and snag last-minute steals. Some companies give exclusive discounts and promo codes right from their Twitter feed and will even respond to customer complaints right there. Follow every airline you’re interested in, and when a deal hits, get ready to pounce! (via Twitter, photo via, Social Strategy)

4. Consider Flexible Dates: Be a flexible traveler and save some extra money to spend on that vacay! We understand you have places to be and people to see, but set your search results to be adjustable (a few days before/after departure and return dates), and you may uncover better deals. (via Airfare Watchdog, photo via Daily Finance)

5. Go During the Off-Season: The key to scoring the lowest fare is to fly when no one else is. Avoid peak travel seasons, instead of venturing to Italy in August, opt for May when there are less crowds. Kids want to go to Disneyland? Try getting to the magical kingdom between Thanksgiving and Christmas. And speaking of Christmas, December 25th might be your ticket to a cheap flight. (via Smarter Travel, photo via Coral Beach Club)

6. Hidden City Ticketing: Master the art of scoring cheap fares with hidden-city ticketing. It’s a tricky maneuver but Fly Shortcut will get you through it. (via Fly Shortcut) Update: Apparently airlines + travel companies weren’t too thrilled after they learned about hidden ticket sales because they consider them to be unethical. You might want to steer clear of this one.

7. Use Alternative Airports: If you’re searching for flights online, go ahead and click the “use alternative airports button.” Many airline carriers fly into alternative (smaller) airports like Burbank instead of LAX. What they save in airport fees is actually passed on to you. Who knows? By skipping the high-traffic airports, you might save on rental car pricing, too. (via ACU Kwik, photo via Huffington Post)

8. Stopover Flights: We know it doesn’t sound too appealing, but if you can save a big chunk of change by stopping in Paris overnight, why not? Pack some essentials to keep you occupied, indulge in some macarons or take a tour of the Eiffel Tower while you await the next leg of your journey. (via Boots n All, photo via New Girl on Post)

9. Subscribe to Airline Emails: Not that you want to crowd your email with more junk, but if you sign up for airlines’ insider info they might send you some pretty sweet deals. 50% off, anyone? Sign up with your frequently traveled airlines or take your pick from this handy list. (via USA Today, photo via Gawker)

10. Frequent Flier Miles: Here’s a traveler trick that you don’t even have to travel for! Airline reward miles can be earned with a simple swipe of a credit card. If you want to get the most out of your reward miles remember a few things, use them to upgrade, don’t hoard them and plan in advance. (via Huffington Post, photo via Air France)

11. Hacker Fares: This “hack” is not for the weary. Have you ever glanced at the breakdown of your airfare before? Take a look; you might see that one portion of your itinerary is way cheaper than another. Savvy travelers know how to hack a lower fare by purchasing two one-way fares on separate airlines instead of a round trip ticket. You may have to finagle with scheduling, but it can end up saving you a pretty penny. (via Kayak, photo via BEA Institute)

12. Use a “Fake” Location: For reasons beyond our understanding, airlines price tickets differently in different countries. A flight from New York to Colombia might be $600 if you’re purchasing from New York, but change your profile settings and claim you’re buying from Bangkok, and that exact same flight might cost $300. Interesting, eh? To take advantage of this trick, book directly from the airline of your choice. (via Business Insider, photo via Square Mouth)

13. Cookies: No we’re not talking about Delta’s infamous Biscoff cookies! If you have multiple airline sites up in your browser and you’re performing multiple searches to score a cheap flight, some people speculate that airlines use cookies to track your previous fares and searches. This may give airlines a sense that you will buy soon, therefore quoting higher prices than they would for a new shopper. Don’t leave a trail of crumbs. Act like a new shopper, and get the lowest price. (via Johnny Jet, photo via Biscoff)

14. Two for One: You know how your friend went backpacking in Europe and bragged about how they could fly from one country to the next for $100? If you’re flying to Europe, you may save yourself some money by purchasing one fare from New York to London, then another fare from London onward, using a local carrier. The same holds true for Asia and some Caribbean destinations. Just make sure you’re not Home Alone-ing it to your gate. Leave plenty of time between connecting flights in case one is delayed. (via Smarter Travel, photo via Huffington Post)

15. Check Refund Policies: You made your plane ticket purchase only to find out that the price went down the next day. Dang! Well, you could be in luck if you bought from an airline, like JetBlue or Alaskan. They promise to refund the difference to you if the fare goes down. Too busy to check and see if fares dropped after your purchase? Sign up with Yapta, a service that not only tracks and monitors rates after you buy, but helps manage the refund process, too! (via Yapta)

Are you a savvy traveler with an arsenal of cheap fare hacks? Share your tips in the comments below.

Michelle Swift
Michelle Swift is a freelance writer and blogs on michelleswift.com. She has an affinity for running, culinary eats, travel and sparkly gold things. People and adventure light her up like a hot pink neon sign!
hacks
Tech
hacks