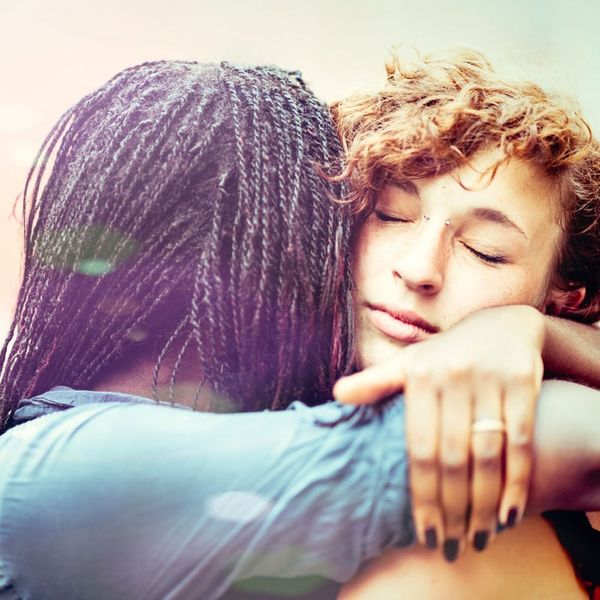 You and your BFF celebrate all the fun stuff together. Her birthday is practically a national holiday to you, she’s your go-to gym buddy when you want to work out with a friend and you were super proud when she landed that promotion at work. Since you share pretty much all the good times, it makes sense that when your bestie is heartbroken, you are too. We all have a hard time getting over a breakup, so instead of sending her a dating book (harsh), really show how much she means to you by being there for her when she needs you most.

Breakups Can Be a Big Deal

It’s no secret that breakups suck. In fact, according to relationship expert Ty Tashiro, one study showed that teens’ first romantic relationship breakup was their biggest life stressor — a stressor that’s correlated with depression.

“When you’re dating a person who knows you better than anyone else, you’re as close to being completely yourself as you can get. Removing that person removes a huge sense of self, emotional security and a big part of your social network,” Tashiro said.

However, no matter who your friend lost, they still have you. Read on for four ways to help her move past her heartbreak.

1. Facilitate personal growth. Any loss also brings about an opportunity for personal growth. While this positive aspect of breakups might be hard for your bestie to see at first, help her focus on what she can gain from her new lifestyle rather than think about what she has lost. Think about boosting her self-esteem and confidence and encouraging hobbies that she didn’t make time for when she was coupled up.

2. Help her reflect. When it comes to breakups, Tashiro says that being sad is totally normal. However, help your friend supplement her sadness with reflection. This combination almost always leads to a healthier and faster mental recovery. “As a friend, help them think broadly about what happened and reach closure,” Tashiro says. “If you do this, you are literally becoming her therapist, because this is exactly what a therapist would tell her to do.”

3. Avoid sharing your own opinion. While your opinion is important to her, Tashiro recommends holding your tongue about the relationship. “People are particularly allergic to others’ opinions after a breakup because they don’t have a clear mind,” he said. So even if you hated her ex from the get-go, now isn’t the time to harp on it.

4. Take her out — and not just on the town. Taking your friend out of their routine after a breakup can positively affect her personal growth by allowing her to see a new side of life and herself. “Get to work, get outdoors. Just get out,” Tashiro says. “These small steps towards being able to engage in those things can be made way easier by the presence of a friend.”

Above all, Tashiro says that companionship and compassion are the most powerful tools when it comes to being there for your bestie when she’s heartbroken. And since you’re a pro at being a caring friend, your friend will be on the path to recovery in no time.

Have any other tips for being there for your BFF? Let us know @BritandCo!

Gabrielle Gresge
Gabrielle Gresge is a Chicago native and journalism student at the University of Missouri. While not chasing deadlines, she enjoys giving campus tours, exploring her new home, and missing her old one. She loves to write about these experiences in her own handwriting at gabriellegresge.wordpress.com.
Celebrity Breakups
Relationships
Celebrity Breakups love