How to Live Life with Greater Purpose, According to a Spiritual Innovator 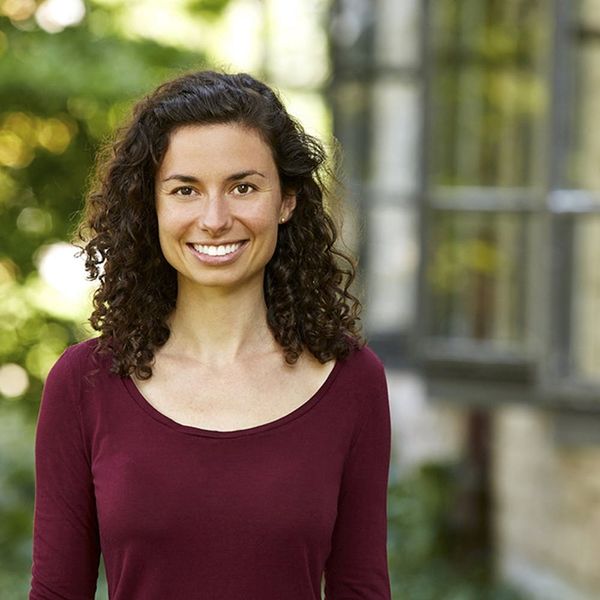 Have you figured out what you’re truly passionate about? Or what your greater purpose to serve the world is? (This got deep fast). Well, Angie Thurston has — in fact, she’s made a career out of it. A playwright by training, Thurston was working in the arts after college, and it triggered a realization: She wanted to be connected to something bigger. It’s what led her to enroll in Harvard Divinity School and put her on her current path. We spoke to Thurston to find out more about how she’s using her innate sense of creativity to bring other minds together.

Brit+Co:What spurred the change in your career?

Angie Thurston: I spent six years after college working in the arts and writing musicals in Brooklyn, but I was increasingly hungry for something I couldn’t place: a community of greater meaning and depth. I had a peer group of people with a similar set of interests, like yoga and the arts, but I wanted to be of greater service to the world, and was discovering that so many people were also in that situation. That propelled me to enroll in Harvard Divinity School to study social and spiritual innovation further.

B+C: Can you describe a project that’s had a major impact on your career?

AT: My career has been catalyzed by a report I co-wrote in 2015 called How We Gather, which is a portrait of community innovation. I grew up unaffiliated with any religion and learned that one-third of millennials also consider themselves religiously unaffiliated. [But] the “end of religion” in our secular culture is not the whole story. That led me to wonder how people were still coming together without the structure of organized religion — perhaps spirituality was just evolving. I began looking for people who identified themselves as “spiritual, but not religious” and my colleague and I started inviting leaders of groups from makerspaces to support circles like The Dinner Party for millennials working through grief, to even CrossFit, to get involved with the project. I ended up traveling about half of every month for about two and a half years just meeting and engaging with these groups.

No matter what the specific goal of the particular group was, they were all speaking the same language: The things that connected them were personal transformation, social change, and accountability for becoming who they were meant to be. We spent a lot of time in conversation with the leaders of these groups, who could be someone like a SoulCycle instructor, but who was leading his or her group in the same way that a spiritual director or pastor leads. The project as a whole worked to push back against social isolation and meaninglessness or purposelessness in life.

B+C: What can spirituality mean in a secular way, or for someone who does not practice a particular faith or tradition?

AT: Spirituality is almost impossible to define, because each person has their own definition of how it’s relevant to their lives. But it has to do with the experience of belonging and having a greater purposefulness rather than a common enemy, as in violence and war. Spirituality hinges on the idea of connection to oneself, to others, and to something greater than ourselves. Basically, our main question is, what are we contributing to?

B+C: What does the next chapter in your career look like?

AT: I’m currently working on a project, a pilot for the 2018-2019 year, being incubated at OnBeing, with a goal of learning how to reach people who are striving to become who they’re called to be. It’s basically an experiment in spiritual deepening within a community. It consists of small groups that meet in an online setting, comprised of participants who self-identify as spiritual, Christian, Jewish, Atheist, Buddhist, Hindu, Muslim, or a combination of identities. The crux of the project is learning how to come together without shared religion or practices.

B+C: Who are some women in this field who inspire you, and why do you find them inspiring?

AT: I’ve been moved by getting to know this group of nuns who work on a project called Nuns and Nones, a collaboration between Catholic women religious and religiously unaffiliated millennials that have conversations all over the country about finding meaning and community. I’m inspired by their wisdom, of course, and radical openness to others’ ideas —they’re seeing this as a creative moment to step into, regardless of their age or the tradition of their faith.

B+C: What preliminary steps can women take to get involved in community innovating, either as a career or as a side project, in search of a greater purpose?

AT: One of the first things is to connect to a sense of ancestry: identifying the women who have come before you and inspired you. And if you feel disconnected from your ancestry, whether in your family or otherwise, go in search of it. Follow that thread as far as it goes, and learn from the experience and stories of those women in history. Try to discover what the wisdom is that you’d like to find.

The second part of that is understand meaning, what we’re for as humans, and not just within the context of religion. Everyone is called to embrace our creativity to find a higher purpose — and this could be within healthcare, education, or technology. There is a lot of space for creativity in our culture, and that’s how we’re contributing to social change.

RELATED: 7 Tips for Finding Work That’s Meaningful to You

From Your Site Articles
Mara Santilli
Mara Santilli is a freelance writer based in New England. Her work has appeared in several publications, including Shape and Marie Claire. When she isn't writing, she can be found munching on any piece of dark chocolate she can get her hands on, plunking out her favorite acoustic songs on the guitar, and finding the cheapest Broadway tickets possible. Follow her adventures on Instagram to see where she's headed next.
Mental Health
Health
Mental Health
More From Health