I Unexpectedly Found Myself at an All-Male Gym, After 30 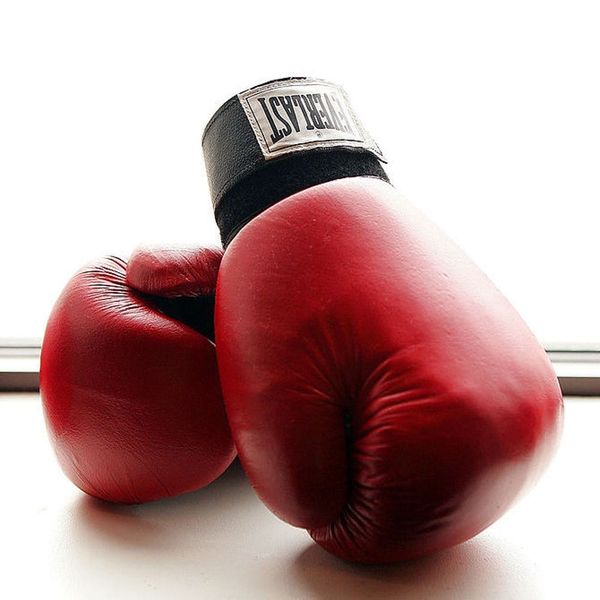 I never realized how good it felt to punch stuff until I started boxing. Walking into an all-male gym the first time, I expected a bunch of body-building maniacs chugging protein shakes and grunting problematic catchphrases. As an out-of-shape woman over 30, I envisioned a less than welcoming first day.

My worst nightmare seemed to be coming true when the person at the front desk stood up to greet me. You could smell the kale salad of his soul. While he explained the gym’s policies I wondered if he had a picture of someone shaped like me taped to the mirror as motivation to work out more. He asked about my fitness goals and I told him I was tired of looking like an extra in Eddie Murphy’s TheNutty Professor. Before I ever broke a sweat, I got my first feminist lesson.

While I snorted laughing at my routine self-deprecation, he nodded and listened without a reply. The silence was uncomfortable and it prompted me to be a bit more serious. I told him I didn’t want to die from heart disease in my 40s like my mother. He countered my defense mechanisms with genuine concern.

Every time I said something hurtful about myself in an attempt to make a joke, his response was patient and sincere. That initial interaction made me reflect on the way I talked to myself. I used humor as a preemptive strike against external critiques on my body.

Feminism — particularly intersectional feminism — is based on amplifying the voices of marginalized identities. Rather than injecting his own philosophies or joining in on my personal put-down party, he gave me room to expand on my thoughts. I became much more aware of my pervasive self-doubt even before I ever broke a sweat.

Still, the gym was full of people who looked like stock photos in the search results for the keyword #goals. I left the first day with no intentions of returning. A week later I saw one of the trainers. He joked that all the men had reverted back to Neanderthals in my absence and asked if I could come to his class that evening.

I showed up with my toddler and no one hit me with a passive-aggressive lecture or judgmental stare. They embraced us and told me about their upcoming youth program. The trainer asked about whether my son liked boxing and offered to teach him for free. We started talking about being single parents, and after my third or fourth yawn, he pointed out that I seemed tired. I told him about all the deadlines piling up and how I was still 30-pounds overweight.

He asked if I ate. The answer was no.

How did this teach me a lesson on self-care? He refused to talk about whether I gained or lost weight. There was no rush. He changed up one of the lessons to include meditation and yoga, despite protests from some of the students. He tagged our class in articles about self-care. He even semi-quoted Audre Lorde’s line about revolution and self-care: “Caring for myself is not self-indulgence, it is self-preservation, and that is an act of political warfare.”

I was taught that selflessness was a virtue. Being in my gym helped me unlearn the traditional notion of selflessness, though. One of the other students in our MMA class pointed out that the way we expressed selflessness often deleted our self. I silenced myself to the detriment of my identity. At the office, I intentionally refrained from calling out sexist and racist co-workers. It was a subconscious habit.

Without mansplaining, the trainer talked about the ways he had caused his wife to react the same way. She often shrank herself and kept quiet about being unhappy because she didn’t want to damage his ego. It wasn’t until they went to counseling that he was even aware of it. They got a divorce and their relationship improved. They co-parent and he is a much better friend to her. There was no bitterness about her or the relationship. He simply took it as a reminder that he needs to be hyper-vigilant in holding himself and other men accountable for the unintentional ways they force women into a negative form of selflessness. I was blown away at his analysis.

In between reps, we swapped stories. One of the best parts was that he never asked for my number or tried to push up on me. When he talked about my thighs or butt, it was only in the context of the correct form. The fear that generally surrounds me in an all-male environment dissipated and I have more hope in men as a species. More importantly, though, I redefined my concept of selflessness and moved toward an outlook that forced me to prioritize myself.

Beyond their uncanny grasp of what it means to be genuine allies in the struggle for women’s rights, the men I have encountered in my gym never dumb things down on my behalf. I don’t do “girl push-ups.” I just do push-ups. Whether I have my toes or knees on the ground when I do them is my decision, but no one makes me feel bad for my choice.

Like a lot of women, lack of self-care, persistent self-doubt, and selflessness have been part of my identity. It is a cycle that has followed me throughout my professional and personal career. When I started boxing at an all-male gym, I recognized the perpetual stress in that process.

A room full of seemingly macho men were the catalyst for my revelation. For at least a few hours out of my week, I feel respected. I feel important. I listen to myself. I remember to consider myself more, not less.

Africa Jackson is a politics and culture writer from the Bible Belt. You can find her work at Hello Giggles, Resist Media, The Tempest, The Establishment, and Black Girl Dangerous. She is a mother of one persnickety child and two books in progress.

Your Myers-Briggs Personality Type, According to Your Zodiac Sign