If You’re a Person Who Uses the Internet, Start Freaking Out About Net Neutrality 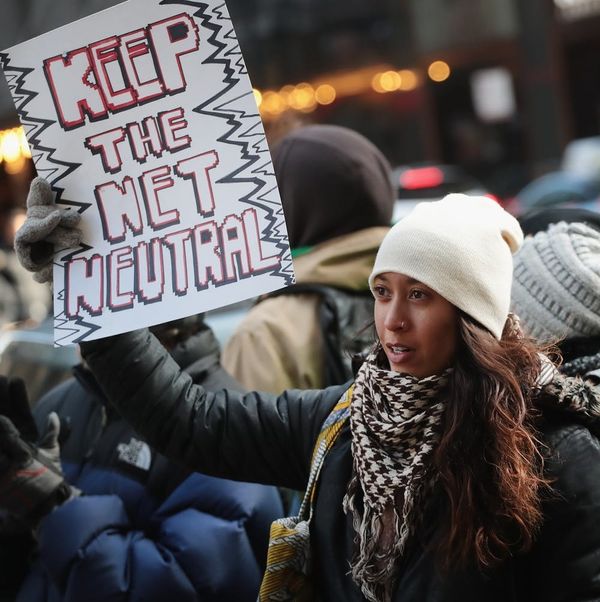 While the political climate this year has mostly been focused on women’s rights, immigration, and attempts to ease ongoing racial tensions, a small fire has been brewing on the sidelines. Since President Trump announced the appointment of Ajit Pai as chair of the FCC at the start of his tenure as president, a looming threat to free speech has moved from a niche concern to headline news, and it’s because Pai wants to scale back regulations protecting a free and open internet.

A free and open internet, otherwise known as having net neutrality, involves a country’s communication laws ensuring that all people get access to the same online content without it being throttled, blocked, or hidden behind a paywall. Although the US government has had net neutrality laws on the books officially since 2015, telecom providers like AT&T, Comcast, and Vonage have all been accused of throttling or withholding access to certain apps or websites, even as recently as this year.

Chairman Pai — whose former position at telecom giant Verison gives him the lobbyist’s view of the problem — doesn’t think that having our current style of open internet is worthwhile. He argues that net neutrality actually hurts people’s access to online content and that current net neutrality laws are too heavy-handed in an open economy. But his arguments, although seemingly pretty fair, may be hiding a darker underbelly that worries many.

Calling the 2015 law a “misguided and legally flawed approach” to managing telecommunications, Pai believes that the new 2017 FCC recommendations don’t actually need neutrality because the proposal makes providers give the commission information on exactly what they are doing and why.

“This will promote future innovation and investment. And more investment in digital infrastructure will create jobs, increase competition, and lead to better, faster, cheaper Internet access for all Americans, especially those in rural and low-income areas,” the proposal states, but those opposed to the scale back are worried about what might happen for consumers.

But what exactly does the proposal say? For one, that in removing net neutrality, but instigating a reporting system, telecoms will have to become more transparent on their practices, which the FCC head believes will benefit consumers because it will fit well with already enacted antitrust and consumer protection laws. Pai thinks that removing current net neutrality laws will push companies like Verison to not only provide better internet access to rural areas and other underserviced parts of the country, but that the freedom will provide an opportunity for bigger and more innovative methods of delivery for all users, creating jobs and pushing the economy forward.

Many outside telecom boardrooms are unhappy with Pai’s proposal, however. Considering the proposal only offers companies a voluntary reporting as opposed to mandatory, it’s unlikely that any companies will simply hand over information to the FCC about their inner workings. Even former FCC Chair Tom Wheeler hates the idea, arguing that Pai is selling out to ISPs looking to get out of the stronghold the FCC has on them in order to only answer to less powerful government bodies like consumer affairs.

Organization SaveTheInternet.com also argues that in throwing away industry standards, many marginalized groups will lose their access to other voices online, due, in part to financial disparities between communities, causing a massive loss of free speech. Losing net neutrality will also certainly mean slower internet speeds for basic services, and premium subscriptions simply to access accounts like Netflix or YouTube.

While there are a number of countries without net neutrality laws, like our neighbors in Canada, consumers there complain of ISP throttling, high priced service plans (the highest in the world) and little fair competition.

While current net neutrality laws may not be perfect, abandoning them altogether may not be the answer, either, but it looks more and more like Pai will be getting his wishes and the FCC will abandon the current set up.

With a vote on the matter set to happen next week, the commission chair told Vice, “It’s very odd to say that getting the government out of the business of regulating the internet is somehow destroying free speech,” adding, “A lot of the people saying things like that are..the last to defend the pluralistic nature of American discourse.”

While Pai (and his family, including his children) are currently being harassed over his proposal, he understands that public policy, in general, ignites passion in the country’s citizens, and he’s all for it.

“My new hope is that we reclaim some part of the public square where people can disagree agreeably,” he told Vice. Without net neutrality, however, will we even be able to access it?

Are you worried about the loss of net neutrality? Tell us why @BritandCo!

Kat Armstrong
Kat has been a writer, social media maven and mom for longer than she's willing to admit. She's also spent time in front of and behind the camera, interviewing celebs, politicians and acting as a producer for fashion and artistic photography shoots. When she isn't writing for various orgs and publications, she's hanging with her kids, husband and French Bulldog, Peter, in Toronto, Canada.
Tech News
Current Events
Tech News
More From Current Events