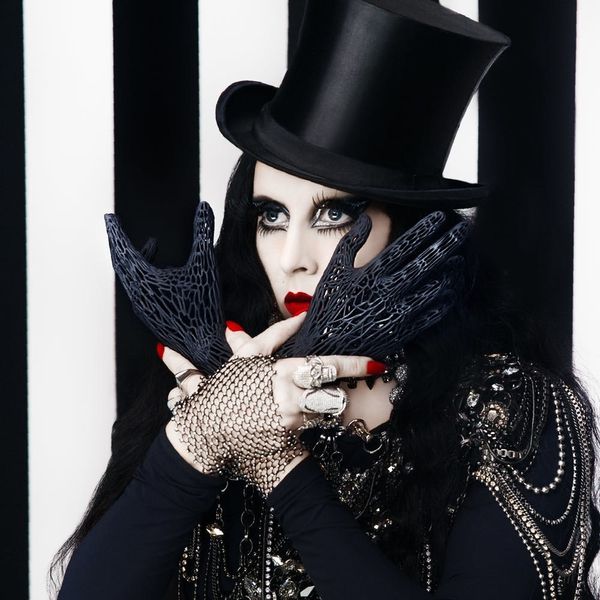 Few celebrity stylists are as iconic as Bea Åkerlund. For more than two decades now, Åkerlund has worked her magic on the style front, adding her goth glam aesthetic to commercials, live performances, and music videos. The fashionista has worked with everyone from Lady Gaga and Beyoncé (she was the mastermind behind the singer’s iconic yellow Roberto Cavalli Lemonade dress) to Britney Spears and Madonna in her long career as a self-described “fashion activist, image-maker… and stylist,” and now, she’s taking her signature bold aesthetic to yet ANOTHER realm: home goods.

The Stockholm native is teaming up with another Swedish icon in the decor collaboration of our wildest dreams, working with the geniuses at IKEA to design a whimsical line of furniture and decorative accessories that’s perfect for anyone looking to add a bit of old Hollywood glamour to their humble abode. Called OMEDELBAR, the line features 34 unique pieces for your bedroom, closet, and beyond, all of which promote Åkerlund’s signature message to “B WHO YOU ARE.”

We chatted with the fashion queen and got the scoop on it all, from the inspiration behind her new line to which pop star she loves working with most (Hint: It’s the one and only Material Girl!).

Despite having worked with some of the top names in showbiz, however, Åkerlund says the prospect of reaching the masses with her work was a big draw. “I design things every day, but I’ve never done anything as accessible as IKEA,” she tells us. “So that’s really exciting for me.”

It should be — the collaboration has been in the works for some time now, with the home store reaching out nearly three years ago. “We worked on it for about two and a half to three years, so there was a long lead time and I feel like I’m giving birth to a child that is finally coming out — a very long, overdue child,” she jokes.

It’s no surprise she feels like a mother to the line — there’s a lot of Åkerlund herself in the collection, which she says was inspired by her own personal preferences. “It’s all inspired by me and all the things I love,”she revealed. “I just looked upon myself to create a line that represented me, so I based it off all the things I want and need.”

Case in point? The OMEDELBAR Lip Cushion that’s shaped like the stylist’s omnipresent red lip in cult favorite MAC Ruby Woo ($18), which she says she has at least 10 of in her purse.

“I really love the lip pillows. I think that they’re really fun and really affordable and you can buy one, or you can buy 20. In the campaign, I had a pillow ocean and… the thing I really tried to communicate through the collection is you can get one for usage or you can get 20 and make your own art piece out of it, so it’s really up to how you see it and how you want to work the collection.”

At $10 to $13 a pop, you can certainly afford to stock up: In fact, Åkerlund says it was really important to her to create beautiful pieces that won’t break the bank. “The most exciting part… is that really anyone can afford at least one piece from my collection. “Style doesn’t come from money — style comes from within — and that’s what I really tried to share with my collection. You can make a room really exciting [without a lot of money] and that is what is amazing. IKEA was able to produce my collection in a way where it feels expensive, but the price tag is very friendly.”

She’s got you covered on the organizational front, too, recommending OMEDELBAR Hat Boxes ($30 per set of two) and OMEDELBAR Shoe Boxes ($13 per set of two) for storage. “If you’re someone like me that constantly needs more closet space, the OMEDELBAR Clothes rack ($129) is really good. For me, closet space is always a big issue, so I really tried to think of all the things that could better my closet.”

The project was also special for the designer in the sense that was able to work with her husband, legendary music video director Jonas Åkerlund, on the video campaign. “I was very excited to collaborate with my husband, who shot all the videos — it was a new one for me, he took my vision to another level. There was no other person that could do these videos. We shot 20 videos and stills in one day, and that requires a team that you really work well with.”

Aside from Jonas, it’s Madonna she cites as her fave co-worker, having teamed up with Madge on numerous occasions for the Queen of Pop’s tours, music videos, and live performances — including that incredible 2012 Super Bowl Halftime Show performance. “I feel like that will go down in history,” she shares. (With 114 million viewers across the world watching her work come to life that night, we’d be inclined to agree.)

“It’s a teamwork,” she says of their collaboration. “We work really closely together, but she’s a woman that knows what she wants, and I like that. I like that in an artist where they challenge me constantly and you don’t know what you’re going to get.”

As for her IKEA collab, she’s pleased with the results there, too. “[It was] a lot of give and take, and I’m very happy with how it all went down.”

Are you excited to check out Bea’s exclusive line with IKEA? Tell us over @BritandCo.

Arielle Tschinkel
Arielle Tschinkel is a pop culture junkie who went to NYU because the Olsen twins went to NYU (really). She is a freelance writer whose work has also been featured on HelloGiggles, Refinery29, SheKnows, Bustle, Hollywood.com, and many others; and she's living her dream one Britney Spears GIF at a time. Follow her on Twitter @mrstschinkel or visit her website at arielletschinkel.com.
Celebrities
Home News
Celebrities Collaboration Home Collaboration IKEA
More From Home News