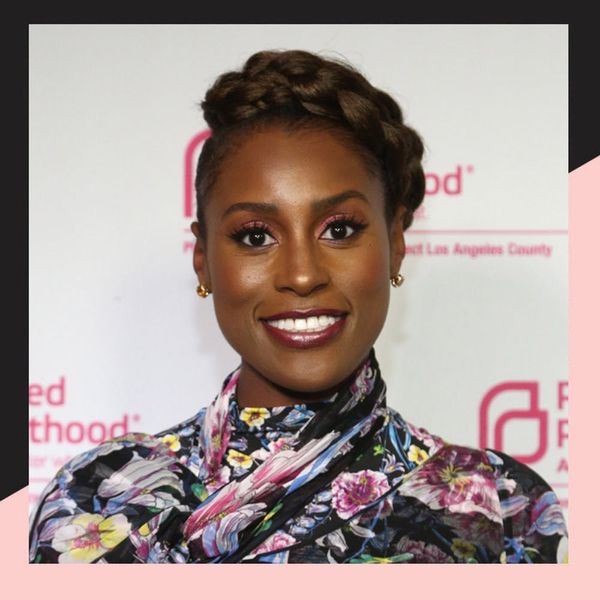 Issa Rae, the mastermind behind HBO’s hit series Insecure, recently added a fresh role to her lengthy resume: the newest face of COVERGIRL. And it’s a natural fit for the actress, writer, director, and producer whose bathroom pep talks have made her (or rather, her character) someone we can laugh with — and relate to. So when Brit + Co sat down with the towering beauty in New York City to chat about the brand’s newest launch, we felt like we were catching up with an old friend. Here, Rae names her favorite shades from COVERGIRL’s Melting Pout Metallics Collection (out today), the beauty treatment she can’t live without, and her take on beauty in Hollywood.

Brit + Co: What’s the first thing you did when you found out you were the newest face of COVERGIRL?

Issa Rae: I either called my mom or my friends. I’m bad about that. If [my mom] finds out I called my friends first, she’ll be mad. I called her and it was supposed to be a secret, and she told the whole family at my grandmother’s 90-something birthday. I was like, “Mom, you weren’t supposed to tell anybody; I signed documents,” and she was like, “Oh, but YAY!”

IR: I didn’t really think I could pull off Banger, which is what I wore in the COVERGIRL commercial, but I really, really like that shade. The one I wear a lot is VIP because it’s just the perfect color for me since it’s casual but also pops. It feels more down-to-earth. And I also love Extra, and that’s another one that just feels nude for those days when I want to be more down-to-earth and casual.

B+C: Best advice for someone who’s afraid to try metallics?

IR: Just try it on at home first. I think that’s what the COVERGIRL ad gets across well; you’re doing it for yourself. And sometimes you don’t need to go out — sometimes you just need to feel good about it, and feel comfortable in it alone. And then my advice is to always try it out with your best friends. My friends will quickly tell me to go back inside and try something else! There have definitely been moments where my friends have been like, “Girl, no,” but I like it, and they’ll learn to love it!

B+C: What was your best Cyber Monday purchase?

IR: I’m so basic. It was the first time I could afford a computer so it was a Mac purchase, after my broke college days. And I was like, “I can buy a computer at a discount on Cyber Monday.”

B+C: Can you recall any Covergirls that influenced your look growing up?

IR: Queen Latifah, hands down! Watching her on Living Single and identifying with her character, Khadijah, and feeling like we had so much in common. Just seeing her, and seeing that she can be a Covergirl, made me feel like she was so approachable. Not that I could do it because I still think Queen Latifah is absolutely gorgeous and beautiful. But I just felt like in her style and in her demeanor, and she has tomboy tendencies, I was like, “Oh, I should be wearing makeup too. I could wear makeup.” And then Janelle Monáe, she’s always been flawless. I saw her as more of a deity, like of course, you deserve this. Your skin is beautiful. Skin tone-wise we more matched, so I looked up to her as a model of what I could aspire to.

IR: I’m big on facials. I love masks. I’m just a big clean skin freak. I do everything to make sure that before I go to bed at night my skin is clean. I don’t go to bed with makeup on my face. Otherwise, I’m pretty low-maintenance. I don’t put a lot of products on my skin. So when I put on makeup, I really like the COVERGIRL Vitalist Healthy Elixir Foundation ($10) for example; it has to feel good. I don’t want to have to keep applying it over and over again so your skin gets oily and clogged. The less, the better for me.

B+C: How often do you use a face mask?

IR: I use them twice a month. I always do a reset twice a month in terms of beauty products and diet. It’s a promise to myself to do better. So if I am eating badly, and I’ve been eating a lot of sugar, I can see that reflected on my face. That’s when I know it’s my reset time and I put on my mask, and change my diet and start over.

B+C: What’s the biggest beauty mistake you’ve ever made?

IR: I make so many. I love eyebrows but I used the black eyebrow pencil to draw my brows in so I looked like a villain. Or I used foundation as lotion when I used it for the first time. I wanted to go out with my girls and they were great with makeup. I felt like to ride with them I had to do the same thing. But I didn’t own any makeup so I went to the nearest drugstore, bought some that probably wasn’t even in my shade, and didn’t know how to apply it. Luckily I had good friends to teach me how to do it.

But my relationship to beauty products has evolved over time. Initially I shunned them, but now there’s an appreciation and an ownership. It just felt like it was on everybody else’s terms, and not on my own, and I don’t know why I thought that. But now that I’ve reclaimed my own beauty, I love it. I have such a deep relationship with it now.

B+C: The definition of beauty has shifted over the last few years; do you think Hollywood has responded accordingly?

IR: There’s such a negative association with Hollywood and the standard of beauty. I think in the television world more so than the film world, yes [Hollywood has responded accordingly]. I think film has to catch up to television. Television as a whole is taking more risks, incorporating more voices, and being more inclusive in a way that film used to do in a certain period. But now I think film is just focused on worldwide appeal in a way that doesn’t serve the everyday person. You know everything is larger than life, whereas television can take more risks in terms of serving a wide variety of audiences. So there’s a long, long way to go, but I like to be optimistic and say that I think we’re taking strides in a good direction.

Alexis Farah
Alexis is a freelance lifestyle writer whose work has appeared in Self.com, Dermstore.com, Yahoo.com, Women's Health Magazine, FabFitFun.com and more. She's the founder and editor of RandomActsofLipstick.com, a website dedicated to covering beauty brands, celebrities, and influencers that give back. She started her professional career as the Associate Beauty Editor at Women's Health Magazine. It's rare to catch Alexis without SPF 30+ or bright red lipstick.
Celebrity Beauty
Beauty News
Celebrity Beauty
More From Beauty News