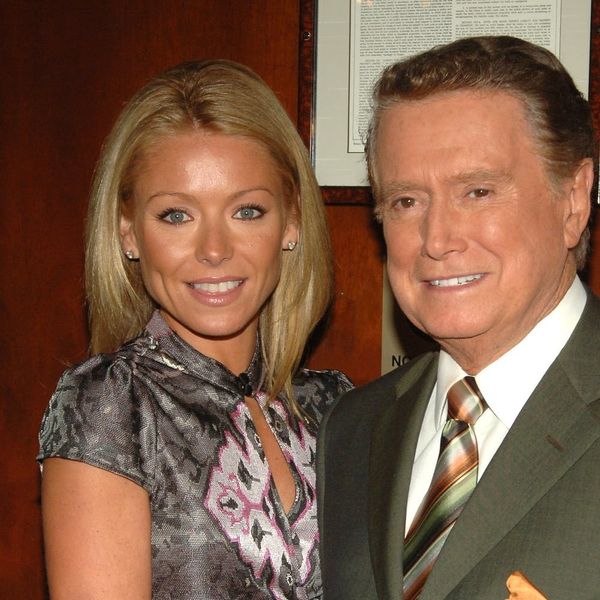 Kelly Ripa may have the perfect work-life relationship with LIVE with Kelly and Ryan co-host Ryan Seacrest nowadays, but apparently, that wasn’t always the case. According to the show’s longtime staple, the same couldn’t necessarily be said of her relationship with former co-host Regis Philbin.

“Regis had a mandate: Absolutely no talking off-camera,” Ripa told The New York Times in a new interview. Speaking of the man who hosted the show (in its various forms) since way back in 1985 before leaving it behind in 2011, she said, “He had almost a superstition about it. You save it for the show. I’d be like, ‘Good morning,’ and he’d say, ‘Save it for the air!’” Yikes!

Ripa, 46, says things are completely different now. Though fans’ initial reactions to the news that the KUWTK producer would be joining her back in May were less than stellar, the duo has since proven that they have the kind of chemistry that’s *definitely* worth watching, both on-screen (did you SEE their epic Halloween costumes?), and in their off-camera lives, thanks to their RL friendship — she and the American Idol host even text at night and hang out on weekends.

It’s a change not only from Philbin, but also former co-host Michael Strahan, whose exit from the show caused quite the bruhaha, with Ripa calling Seacrest not only the “future of the franchise” but the “future of ABC.” High praise, indeed!

They specialize in small talk — and big ratings. In a time of divisive politics and fraught discussions of social issues, @kellyripa and @ryanseacrest are keeping the mood light on @livekellyandryan. While the show’s main competitor, @nbc’s “Megyn Kelly Today,” has lately leaned into segments involving sexual harassment and revenge porn, “Live” has not wavered from its typical format. As @kellyripa put it after a recent taping: “We’re good time Charlies. That’s what you’re signing up for.” Like Regis Philbin — who retired in 2011 after logging more hours of airtime than anyone else in television history, according to Guinness — #KellyRipa has the ability to spin the smallest anecdote into morning-broadcast fare. Across her 16 years on “Live,” she has often mined her life with her husband and their 3 children for material. @ryanseacrest, who joined the show in May, plays the almost annoyingly perfect foil to her more untethered on-air character. “He’s the future of the franchise,” she said of #RyanSeacrest. “He’s the future of ABC.” @vincenttullo took this portrait of #KellyandRyan. Visit the link in our profile to read more.

In return, her new BFF told the Times, “If it were raining outside and there was a puddle, I’d want to stand in front of Kelly so she wouldn’t get wet. There’s that protection thing.” Awww!

It certainly works for the show: As the show’s producer, Michael Gelman, told the outlet, “The hosts have changed, but the overall concept continues on: two people, a man and a woman, and enjoying the chemistry between them.”

What do you think about Regis Philbin’s no talking off-camera rule? Let us know @BritandCo!

Desiree O
Desirée O is a ‘Professional Bohemian’ who loves anything and everything related to the arts, entertainment, and pop culture. She ADORES being a ‘Newsy’ for Brit + Co, covering all of the latest tidbits of awesomeness that you want to read about. When she’s not writing, she’s either making messy art, going on long adventurous walks with her camera, or poking around over at bohemianizm (http://www.bohemianizm.com/). You can find out about Desirée O and her work at http://DesireeO.com/ or follow her on Twitter @DesireeO.
Celebrities
Celebrity News
Celebrities TV