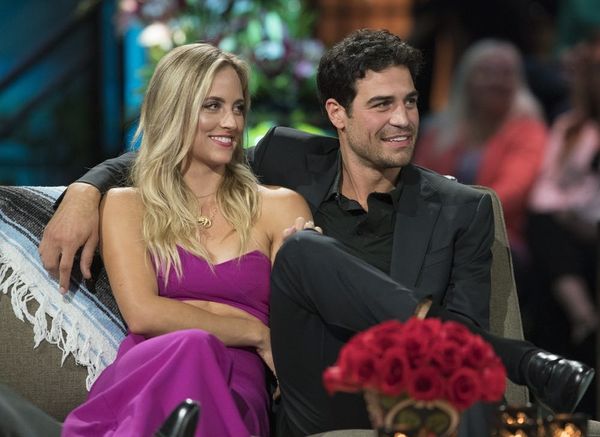 Fans have been waiting for engagement news ever since Kendall Long found love with Joe Amabile — AKA Grocery Store Joe — on season 5 of Bachelor in Paradise. And while many members of the reality show franchise find themselves proposing just mere weeks after meeting their significant other on camera, Long says that she and Amabile are in no rush to take that step, although it’s very much a consideration for their future.

“Our whole entire relationship is about being engaged,” she told E! News while attending iHeartRadio’s ALTer Ego concert over the weekend. “As two people who are mainly afraid of commitment, it makes it so the idea of talking about engagement isn’t scary.”

She went on to say that they “think that it will definitely, possibly happen someday,” but that they have other priorities right now and “want to get so many more things solidified” before they put a ring on it.

Long and Amabile have indeed been busy since appearing on BiP. Amabile made it to the semi-finals on season 27 of Dancing With the Stars, while Long popped up as a party host during the premiere of Colton Underwood’s season of The Bachelor.

Their relationship has been moving forward as well. They lived together during Amabile’s stint on DWTS, and although he’s currently on the road doing a tour for the show, they’re already thinking about where they’ll set up home next.

“He has a place in Chicago,” Long told E! News. “But now that he’s on tour, we’re thinking of officially getting our own place together after the tour, so that is our goal.”

And despite not being together at the moment, they’re still keeping in touch as much as possible. “He’ll call me like five times a day,” Long admitted. “I like talking on the phone because text never does anything justice.”

Would you like to see Kendall and Joe eventually tie the knot? Let us know @BritandCo!

Desiree O
Desirée O is a ‘Professional Bohemian’ who loves anything and everything related to the arts, entertainment, and pop culture. She ADORES being a ‘Newsy’ for Brit + Co, covering all of the latest tidbits of awesomeness that you want to read about. When she’s not writing, she’s either making messy art, going on long adventurous walks with her camera, or poking around over at bohemianizm (http://www.bohemianizm.com/). You can find out about Desirée O and her work at http://DesireeO.com/ or follow her on Twitter @DesireeO.
Celebrity Couples
Celebrity News
Celebrity Couples The Bachelor