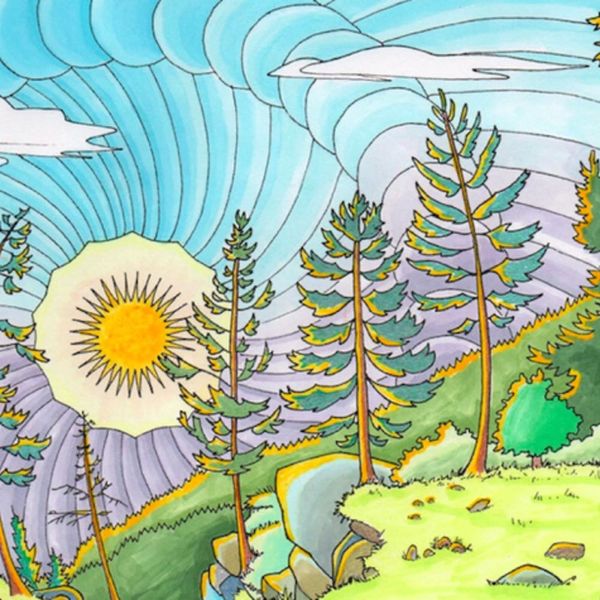 We’re pretty obsessed with crowdfunding projects. Most of the time, we hunt down ones that are either some far-out tech idea we never could have dreamed up or things that make every day life a lot easier. This time around, we’re showcasing products that make life more luxurious and just better. A shower head that uses 70 percent less water, yet still allows you to take long, hot showers, chic cooking spices and an adult coloring book are all making this month’s Kickstarter faves.

1. The Strongest Screen Guard Ever: The most annoying thing about touchscreen phones is that the screen cracks ridiculously easily. Instead of complaining about it like, um, most people, five geniuses from Canada invented Metearmor, which claims to be the strongest screen guard in existence. In the demo, they literally throw an iPhone down the stairs and the screen remains uncracked. The guard has four layers of protection, including one layer of silicon. Amazingly, the screen guard doesn’t look bulky: you can’t even really see it. No wonder the project already has over $5,000 in funding.

2. Shower Head That Uses 70 Percent Less Water: The West Coast water shortage is a real wake-up call. But giving up luxurious hot showers is really hard, which is why we’re geeking out about the Nebia Shower. The shower head uses 70 percent less water than a typical shower head. And no, that doesn’t mean there’s just a trickle coming out. Basically it shrinks down the water droplets. Hey, maybe it means your hair will dry faster too. A girl can hope.

3. The Most Stylish Spice Line Ever: We never thought cooking spices could do double duty as kitchen decor, until now. ILA is a line of spices that are packaged in glamorous black and gold and look more like expensive beauty products than spices. The debut collection includes sea salt, maple syrup, wildflower honey and olive oil.

4. Suction Cup for Your Phone: Not to be all anti-Selfie Stick, but this new Kickstarter would make taking selfies a lot less awkward. Nanohold is basically a suction cup for your phone, allowing it to stick to any surface. So if you want to take a photo of you and your bae without your arm taking up half the frame, you can just stick this baby on a window or mirror, set a selfie timer and voila. It also would come in handy at the gym, if you want to follow a YouTube workout. It’s yet another invention we didn’t know we needed, but now want desperately.

5. A Civil Rights Documentary That Raises Awareness: Everyone is familiar with how Martin Luther King Jr. and Rosa Parks contributed to the Civil Rights Movement, but a lot of people don’t know who Emmett Louis Till is. A new documentary, Till, is attempting to change that. Till was a black teen growing up in the 1950s Chicago. One day, he whistled at a married woman he thought was attractive. Later that night, the woman’s husband kidnapped Till and beat him to death. Amazingly, his murderers were found not guilty. The event was a huge injustice, and his story needs to be told.

6. A Magical Adult Coloring Book: We’re all for pushing the boundaries of creativity, but there’s something soothing about coloring inside the lines, no matter how old you are. Legendary Landscapes is a beautiful coloring book for adults. The focus is on nature, so you can create breathtaking sunrises or forest imagery, even if you were always an art class outcast. The pages are so pretty, when you’re done, you can tear ’em out, frame them and use them as new wall art.

7. Tea Truck: Food truck culture is everywhere these days, but two Bay Area besties are changing the game with their tea truck, Steep Tea Co. The duo drives around selling loose-leaf custom-brewed tea out of a 1967 Jeep Postal Truck. The teas look seriously delicious and include actual dried fruit. They want to grow their business to ship their teas to customers and cafes all over the world.

8. Magnetic Stylus Holder for Your Tablet: Pens are notoriously easy to lose, which you really don’t want to do if you use a stylus. One tech-loving designer is solving that problem with Remora, a sleek leather Stylus holder that attaches to magnetic iPad cases. Tech lovers, this is the office accessory you need.

9. Coolest Lantern Ever: This design idea is simplistic but really makes a statement. Called the Cabin Lantern, it’s essentially a single bulb on a block of wood that you can take with you anywhere. Edison bulbs look cool on their own, so why hide them in some ornate light fixture? This Scandinavian-inspired design really lets it shine — pun intended.

10. A Radio Show for Childrens’ Books Lovers: Awesome dads Travis Jonker and Colby Sharp made a cool radio show together called The Yarn, which takes kids behind the scenes of some of their favorite books. They interviewed a slew of children’s authors to get the story behind the story, which both kids and adults love. Now, they’re trying to get funding for another season. Rock on, podcast culture.

Which crowdfunding project are you most excited about? Tell us in the comments.

Emily Laurence
Emily is a contributing writer for Brit + Co and former teen magazine editor. She lives in New York City, where she's on a mission to find the most delicious mocha in the East Village.
Crowd Funding
Home News
Crowd Funding
More From Home News