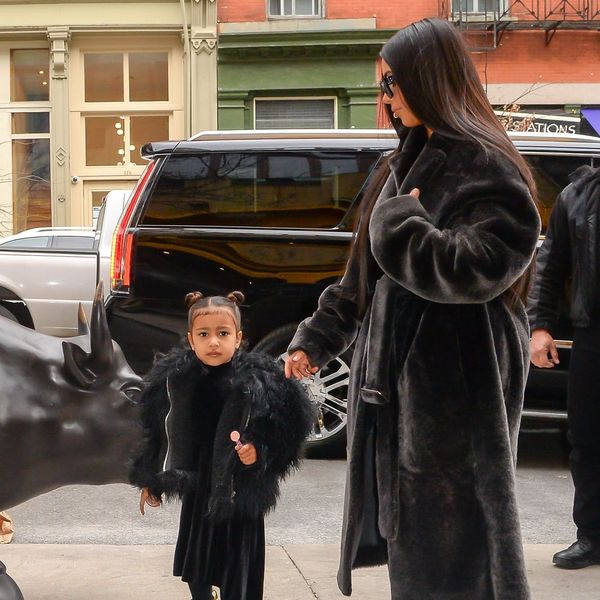 North West is definitely not your typical four-year-old. Thanks to her ultra-famous parents, she’s one of the best-dressed tots in the game — and now it sounds like she’ll be following her makeup-loving mom Kim Kardashian West’s footsteps into the makeup world.

In an interview with WWD, West said, “You know, the other day it was so funny. My daughter watches so many YouTube tutorials and videos and she was unboxing the My Little Pony Colourpop collection and I thought to myself, ‘I wish I was recording this’ because her reaction was so funny. And then she did makeup on the My Little Pony that they gave and she said, ‘Mom, I want to do a YouTube video,'” West recalled. Yep, the kid wants to be a beauty vlogger.

She asked Kanye what he thought, to which he (understandably) responded with a “no.” They then told North that they could record a video that would stay on their phones so she could “test it out.”

Despite leading such public lives, North’s parents are hesitant to let her try real vlogging. “I don’t know if it’s something she would really want to do,” said West, “but it’s always a struggle on how much you want to have exposed or how much access you want them to have to social media.”

“I remember when Kendall and Kylie were growing up,” the 36-year-old continued. “We were so freaked out and we always had their passwords and we would always go check their accounts, and I mean, they were really little. I don’t know if they knew we knew.”

My baby girl turned 4 years old today! She's my light & my everything!!! I love you to the moon & back North

However, she doesn’t believe that it will be too long before North is allowed online. “In the world we live in today, I don’t think you ask someone young growing up to not be on social media — that’s just cruel. That’s like asking [someone] to not communicate,” she said. It sounds like the Kardashian-Jenner-West family might soon have another beauty mogul on their hands!

What do you think of the Wests’ decision? Would you watch beauty videos by North? Tell us @BritandCo!

Shea Lignitz
Shea can be found in the nearest bookstore or brewery, exploring the great outdoors, or blasting Led Zeppelin. She grew up in the cold and rain of Northern California's redwoods but is currently wandering around Texas.
Celebrity Beauty
Beauty News
Celebrity Beauty Celebrity Makeup YouTube