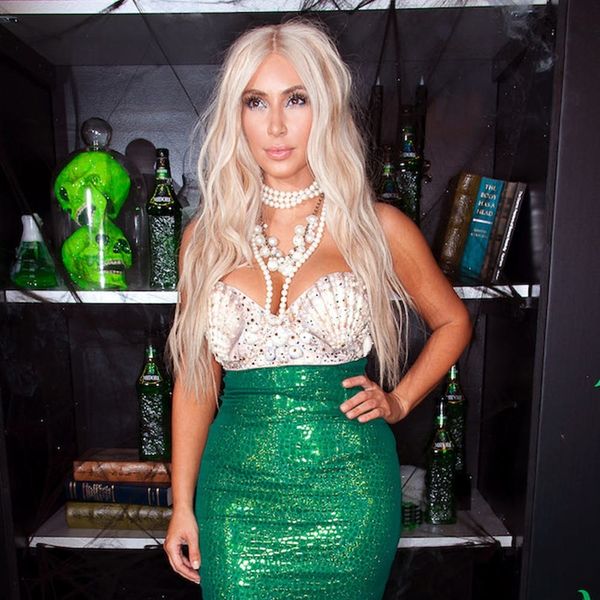 Over the years, we’ve watched Kim Kardashian West go from Paris Hilton’s BFF to reality start to fashion icon/mogul/mom of the adorable North West. While Kim’s many titles have changed over the years, one thing remains the same. The girl loves Halloween and her costumes are always buzzed about. Who could forget her incredible mermaid look the year she first stepped out with now husband Kanye West?

Kim posted some of her best looks over the years on her site, where she also shared with her fans, “I LOVE Halloween. Every year on Halloween as a kid I would celebrate my birthday since my birthday is so close. I need to think of such a major costume for next year! This year, I am obviously limited but I love looking back at this decade of costumes.”

Over the years, Kim has dressed up as Poison Ivy, a skeleton, Cat Woman, Little Red Riding Hood, a sultry Snow White, Wonder Woman, Anna Wintour and more. Slay, Kim, slay. While a lot of these costumes would take a little more time than 24 hours to DIY, some of them are totally doable — like the skeleton one would just require a black turtleneck, black leggings, face paint and some fabric paint. That’s definitely a great last minute costume if you’re still scrambling for something.

In regards to which one was her fave, Kim wrote, “I think my favorite was Princess Jasmine and our Batman theme. I love how all of my friends and family were different characters.” Enlisting your friends and family to dress up as an entire cast of superheroes and villains is a great way to nail a group costume and lets everyone get creative.

But of course, it being Kim, Kanye and krew, it wouldn’t be as simple as just dressing up in group costume. “We all drove Lambos to match our costumes: Kanye and I in a gold mirrored one, and Jonathan Cheban in a green one to match his Riddler costume!” she said. Riiiight, totally DIYable.

Whatever she’s dressing up as this year, we’re definitely tuning in to see what she comes up with.

What do YOU plan on dressing up as for Halloween? Tell us in the comments below!