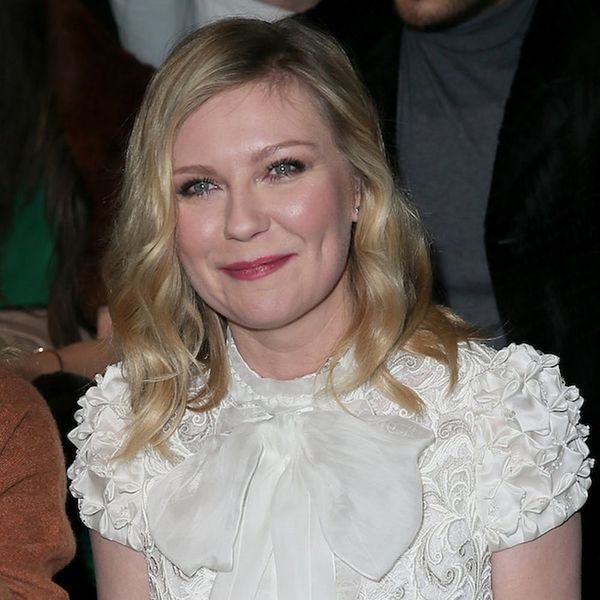 When it comes to engagement announcements, it seems like your options are to play the elaborate Instagram reveal game, or to just say nothing at all, opting instead to quietly start wearing a ring like Evan Rachel Wood did at the SAG Awards recently.

Kirsten Dunst and her Fargo-costar Jesse Plemons were rumored to have gotten engaged over the Christmas holidays, and while they haven’t exactly made an announcement as bold as Margot Robbie’s flip-off, they’re not exactly keeping it under wraps, either. Kristen was seen wearing a flashy diamond on *that* finger earlier this month, and recently, while sitting front row at Paris’ Couture Week, she gave photographers a good long look at it. And guys? It’s a BEAUT.

Let’s zoom in and take a closer look, shall we?

All the heart eyes! The understated yellow-gold, oval diamond ring is set with flanking baguette accents, and while it looks sleek and simple, don’t be fooled: Experts say the center stone looks to be about three carats, valuing at about $80,000. Yowza!

Kirsten nor Jesse have spoken of their wedding plans just yet, but in an interview last year, Kirsten said that when she did get married, she wanted a low-key affair. “Courthouse, dinner party and DJ with friends and family,” she said. Sounds like the perfect party for these two love birds to us!

Do you like the style of Kirsten’s ring? Let us know over @BritandCo!