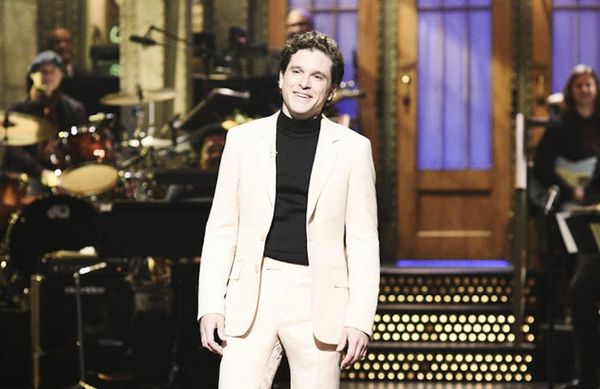 Jon Snow, er, Kit Harington made his SNL hosting debut on Saturday, April 6, and in a surprise treat for fans, some of his Game of Thrones costars joined him on set. In fact, two fellow GoT actors showed up during his opening monologue.

After a fan asked Harington to reveal the ultimate winner of the game of thrones, which he refused to do, Emilia Clarke (AKA Daenerys Targaryen) stood up in the audience to pursue the line of questioning. “Could you just give us a general sense of how it ends?” she asked, claiming that she herself had forgotten the highly anticipated finale because it was filmed so long ago. She then joked, “Do you remember in season 6 when we had sex? Did you know they filmed it?”

As the audience cheered, John Bradley (AKA Samwell Tarly) popped up to ask his own extremely important question: “Do you know what happens to Samwell Tarly?” He also had some personal questions for Harington. “Do you think we’ll still hang out after the show is done? Like best friends?” he asked. “What about next Tuesday? I could come by around 6am.” When Harington replied that he already had plans, Bradley quipped, “Wow, they were right. You’ve changed.”

The Night King was also on hand (played by Pete Davidson), as was Harington’s real-life wife, Rose Leslie (AKA Ygritte), who posed the two most important questions of all: “What are we going to do for money now?” and “How soon can you grow back that beard?”

Later in the show, Harington helped SNL dream up a number of potential spinoffs for the show, including Castle Black, a “sexy moody drama about forbidden love” starring Jon Snow. The Marvelous Mrs. Melisandre and Game of Thrones: Special Victims Unit (costarring Ice-T and Mariska Hargitay) were also top contenders.

RELATED: The Best ‘Game of Thrones’ Gifts in All the Seven Kingdoms

(Photos via Will Heath/NBC)