The Best ‘Game of Thrones’ Gifts in All the Seven Kingdoms 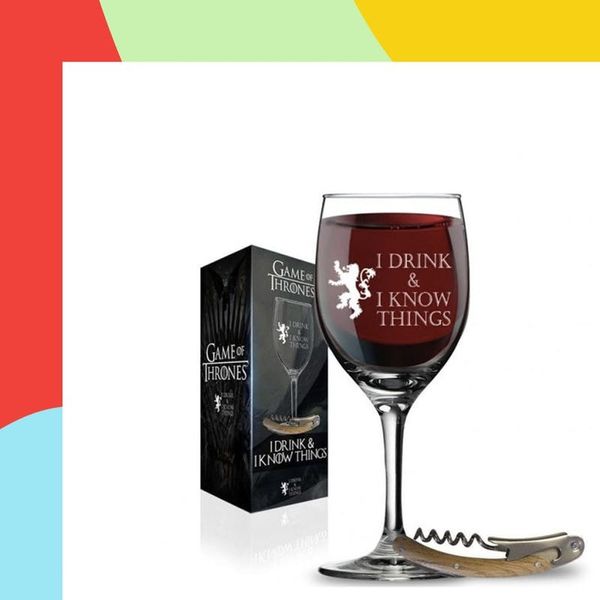 We’ve lived through countless highs, lows, and WTF moments in Westeros, and on April 14, we’ll see the final season of Game of Thrones, a series with more drama than The Bachelor. Season 8 promises to be the most epic one yet, with most of our favorite characters returning (but definitely not all surviving) for the final battle for the Seven Kingdoms. These gifts will help soften the blow of the series finale, whether you’re rooting for the Targaryens, Lannisters, or White Walkers all the way.

Live and re-live all the best and worst moments of the first seven seasons of Game of Thrones.

Clad in the House Lannister colors of gold and crimson, these shoes will have you running as boldly as a lion.

: Pick your beverage and side — these glasses represent the four main houses of Westeros, featuring each one’s sigil and motto.

If you thought Monopoly was competitive, try this version, where hotels and houses are transformed into custom villages and keeps; Community Chest cards are now Iron Throne cards; and tokens include the Three-Eyed Raven and a White Walker.

This fire and blood tee represents House Targaryen, and its three-headed dragon will have others bending the knee to you.

The youngest Lannister sibling may be the only one fit to sit on the throne, so honor Tyrion (and his love for wine) with this collectible vinyl figure.

This unassuming black ceramic mug has “For the Throne” written across its outside, but when filled with a hot beverage, the Night King appears.

Now you can own your own set of dragon eggs in the form of hand-painted, unscented candles.

You’ll need more than one bottle of wine to cope with the show’s final season. Grab this trio — which includes a Pinot Noir, a Red Blend, and a Chardonnay — to pair with your viewing.

Desired Cart “I Drink and I Know Things” Wine Glass

Use this cutting board (available in maple or walnut) to remind everyone in your kitchen that dinner is coming.

Let this Hand of the King give you a hand opening bottles and letters. There’s also a magnet on the back for safekeeping on your fridge.

by George R. R. Martin ($17): Dive colorfully into the world of Game of Thrones with this book that includes 45 detailed illustrations.

For your next dinner party, serve up the best dishes — endorsed by George R. R. Martin himself — across the Seven Kingdoms, including mulled wine (The Wall), beef and bacon pie (The North), and lemon cakes (King’s Landing).

Honor the hero Hodor with a doorstop that will hold as steadfast as he did.

Find out what destiny has in store with you via these themed tarot cards.

Show your Targaryen pride with a sweatshirt that is both comfy and fierce.

A true Game of Thrones fan will love this leather-bound set of the first five novels.

Wear your house allegiance on your wrist with the Alex and Ani Game of Thrones Collection. The Sansa Stark bangle is made of rose gold and has charms that represent her character’s growth throughout the series.
Lesley Chen