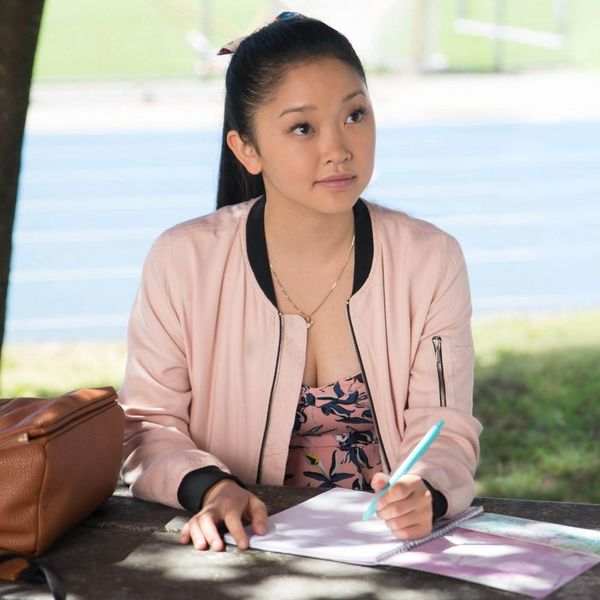 Crazy Rich Asians is (rightfully) getting a lot of attention for its history-making cast, but it’s not the only rom-com with an Asian lead debuting this week. Netflix’s To All the Boys I’ve Loved Before, a lovely, witty film based on Jenny Han’s best-selling YA novel of the same name, hits the streaming service on Friday, August 17, with 21-year-old Vietnamese-American actress Lana Condor in the starring role.

Condor plays Lara Jean Covey, a high school student whose secret love letters — letters she never intended to send — somehow make their way to each of her crushes. The mortifying situation forces her out of her comfort zone and into a fake relationship with the impossibly charming Peter (Noah Centineo), who has his own reasons for suggesting the arrangement.

We won’t spoil the rest of the movie for you, but we will say it’s worth a watch — and that’s due in no small part to Condor, who is as sweet off-screen as she is in the film. Read on to find out what she told us about the importance of representation, her favorite scene to shoot, and her awkward first meeting with Centineo.

Brit + Co: The movie is based on a book by Jenny Han — had you read the book before you got the part?

Lana Condor: I hadn’t read it before I got the audition, but as soon as I got the audition, I got all fired up because, you know, I don’t usually get auditions to be the lead in a rom-com. I was like, “I have to get this movie!” So I ran to Barnes and Noble, bought it immediately, read it in a day, and then auditioned the next day. And then I kept reading it throughout that whole process of casting. At this point, I’m pretty sure I’m a To All the Boys I’ve Loved Before pro.

B+C: What do you love most about the story?

LC: I love Lara Jean’s relationships with her sisters. I love that wholesome family dynamic that they have, even though it’s kind of an unconventional one. I think it’s really refreshing to see families that get along. Overall, I love that the book has a good heart. I feel like, right now, there are so many crazy things in the media, and in movies and television, and sometimes it’s refreshing to read or watch something that is just good, that makes you smile and doesn’t make you angry.

B+C: Who in your life do you lean on the way Lara Jean leans on her sisters, Margot and Kitty?

B+C: Do you have a favorite scene in the movie?

LC: My favorite scene is the scene where Lara Jean and Peter are in Peter’s mom’s kitchen, and she’s talking to him about how you can still miss someone even if you’re mad at them. I loved shooting that scene, because Noah and I were close from the very beginning, but I think in that specific scene is when I felt most at home with him.

I also like watching the scene where I’m running around trying to kill Kitty. That was so fun to shoot. So I guess those two.

B+C: Let’s talk about Noah. You two have such great chemistry in the movie. Was there an immediate spark between you?

LC: We were actually at pre-reads together, and I was so nervous at pre-reads. I was sitting in the corner, and I looked up, and this beautiful tall guy walked in the door. And I was like, “Nope, nope, I’m keeping my head down, I’m not going to get distracted.” And then he walked up to me, and I clocked him walking up to me, and I was like, “No, no, no, no, no.” I don’t know if you’ve met Noah, but he is the chillest, most confident human being in the world, and he has so much swag. So he sits and he goes, “Hey, do you want to read lines together?” And I said no, because I didn’t want to get distracted.

Then, after I got the part, I got the list of guys they were auditioning for Peter, and Noah was the last name on the list. I was horrified! But he came in and we chemistry-read together, and it was magical. As soon as Noah walked out, we were all like, “Yep, that’s Peter, we don’t have to look any further.” Peter makes Lara Jean feel very giddy and at times a little uncomfortable, and Noah makes me feel the same way. When I’m around Noah, I’m like, “Oh my god, it’s Noah! I love you so much!” I have a huge crush on him.

B+C: You mentioned earlier that you don’t usually get auditions to be the lead in a romantic comedy, which is true for most Asian-American actors. With the release of To All the Boys and Crazy Rich Asians, though, we’re really seeing why representation matters. What does it mean to you to be the romantic lead in this film?

LC: It means the world. I literally cry every time I think about it, because not in my wildest dreams did I ever think I was going to get the opportunity to do this, to be the lead in a rom-com. Maybe I would have gotten the opportunity to be in a rom-com, but not as the lead. That just doesn’t happen. So I feel very lucky to have this opportunity. I hope it does well, I hope people are vocal about it, and I hope that Hollywood starts to understand that we’re not stupid, and that we want to see what the real world looks like reflected in film and television. It makes me sad, because this shouldn’t be groundbreaking. We should be past this. If we can get to the point where this is no longer a groundbreaking thing, I’m going to be so happy.

B+C: This role is very different from a lot of other roles you’ve played in movies such as X-Men: Apocalypse and Alita: Battle Angel. What are the biggest differences and challenges in how you approach a character like Lara Jean versus someone like Jubilee in X-Men?

LC: It’s funny — I’m doing a television show this month, and I play an assassin there, too. It’s so exciting playing badass superhero characters, but what I yearned most to do was to play a normal girl. Lara Jean is a normal girl, and it was very refreshing to play her, but I didn’t realize how difficult it was going to be. When you’re playing comic book characters or graphic novel characters, you have the hair, the costume, the powers, so you can hide behind that as an actor. But playing a normal girl was actually quite challenging because I had nothing to hide behind. I just had to be myself and be authentic and hope for the best. So that was a very refreshing experience for me, because I’d never had that before. And I loved it. I love doing both, but this was very challenging and real for me.

B+C: What was Susan Johnson like as a director?

LC: Susan was wonderful. She is very passionate about film, and all she wanted was to have the film represent Jenny’s book well. That’s all she wanted, and I think she did a really great job. She was always so supportive and she was everyone’s number one fan. She was wonderful, she was passionate, she knew what she wanted, and she fought for a lot of things on Jenny’s behalf. She’s the epitome of a strong female director — well, a strong director. Take the sex away from it. She was just a strong director, period.