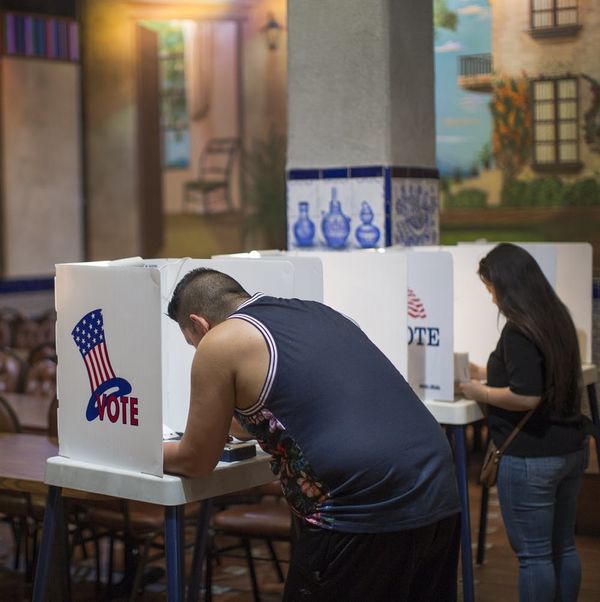 The midterm elections on November 6 are probably as crucial — if not more so — than the presidential election. Because as we know, senators, governors, and representatives make the legislative decisions that impact our lives. So what’s on the line? Immigration reform, women’s rights, trans rights, healthcare, education, gun control — in other words, everything.

The Latinx community is right in the thick of this midterm election, with many pollsters saying that their vote could be the deciding factor in states such as Texas, Florida, Nevada, and Georgia. According to the Pew Research Center, more than 29 million Latinx Americans are eligible to vote “making up 12.8 percent of all eligible voters – both new highs.” The interesting part is that seven-in-10 Latinx voters live in just six states: California (7.7 million), Texas (5.4 million), Florida (3.0 million), New York (2.0 million), Arizona (1.1 million) and Illinois (1.0 million). Pew also reports that Latinx “make up the highest share of all eligible voters in New Mexico (42.6 percent), followed by California (30.0 percent), Texas (29.8 percent), Arizona (23.4 percent) and Florida (19.8 percent).

Typically, however, people don’t show up to the polls and vote in the midterm elections, and this is especially true of Latinx voters. “In 2012, only 37.5 percent of Latinx millennials voted, compared to 47.5 percent of whites and 55 percent of African Americans in the same age group,” Pew reports, and that rate has been declining since 2006. So will there be an upswing this year? The answer looks like it will likely be affirmative, thanks to an increase in early voting this year. People are clearly seeing the urgency.

But those numbers shouldn’t persuade people to think their voice doesn’t matter on November 6, election day. Several organizations and partisan groups are pushing hard to get the Latinx community (of all ages) to vote in the midterm elections.

Cristina Tzintzun, founder of the Jolt Initiative — a nonprofit that aims to increase the civic participation of Latinx in Texas — says her organization has already helped register an estimated 7,000 people, many of them first-time voters. And all of them are voting for Texas candidate Beto O’Rourke for US Senate .

“Many of the people we spoke to said that no one had knocked on their door,” Tzintzun said in an interview with Brit + Co. “One of the main things [that prospective voters] ask for is information. Who the candidates are, where they stand on issues that affect our community.”

Tzintzun said that, contrary to what some might believe, the number one concern that Latinx voters have today isn’t immigration, but health care for all. The Jolt Initiative conducted a study titled “We Are Texas: An Analysis of Young Latino Voters in the Lone Star State” and 29 percent of Latinx survived said that healthcare for all was on top of their list of concerns, while 28 percent said protections for immigrants, and 20 percent said racial equality and justice.

Also, more than half of Latinx said they would not vote for a candidate who made comments against Mexicans and/or Latinx, or was anti-immigrant.

Latinos are the future, and in the next two presidential elections and three midterms our influence and political power will only grow, mas y más!

In Texas, the senator’s race between GOP Sen. Ted Cruz and Democrat Congressman Beto O’Rourke is one the most important elections that will be decided on November 6. If O’Rourke were to win, he’d become the states first democratic senator in 30 years. O’Rourke‘s camp advocated to his supporters to vote early, and many of them did.

Manny Diaz, a first-generation immigrant of Dallas, tells Brit + Co that he wasn’t as passionate about voting in the past as he is now, and that’s partially because he considers himself more educated on this issues today such as gerrymandering and voter suppression. He also says that while he is a liberal he does have conservative values but says that Cruz hasn’t done anything to help his community.

Pretty cool getting a shout out from @BetoORourke this morning after casting my early vote! #VoteWithBeto #BetoForTexas pic.twitter.com/C6BbVgwfse

“They can’t tell me anything he has done that has been beneficial to Texas or the US,” Diaz said about people who tell him they’re voting for Cruz. “They’ll say ‘he’s created jobs,’ and I’ll say which jobs has he created?”

Like Diaz, Natalie Del Castillo, of Austin, also voted early for O’Rourke because as a first-generation Peruvian-American she sees it as her responsibility to vote. She says it is O’Rourke’s stance on immigration is the main reason why he won her vote.

“Voting has always been important in our household.” Del Castillo tells Brit + Co. “Friends of mine got a big group together to be the first in line to vote in Travis County.”

But her group of friends weren’t the ones that showed up at 6 am to vote early. Del Castillo says that about 70 to 100 people happened to be there too.

Elsewhere in the country, Mijente — “a political home for Latinx & Chicanx organizing” — is mobilizing Latinx voters to show up to the polls for State House Minority Leader Stacey Abrams, the Democrat candidate, in the race for Governor of Georgia. They say a victory for her could be “extremely significant for the Latinx US born and immigrant population of the state who have been the target of harsh criminalization and anti-immigrant policies.”

For the past 14 years, Voto Latino has also been encouraging young Latinx to register to vote and get involved in their community. This year they launched Somos Mas, a campaign to register and mobilizing more than 200,000 Latinx voters.

“Somos Mas speaks to the collective power of each vote. We know that 80 percent of registered Latinxers vote but we need a compelling reason to cast that ballot,” said President & CEO of Voto Latino Maria Teresa Kumar in a statement. “Somos Mas speaks to our community’s contributions to America and that we are more than the stereotypes that have become pervasive. It speaks to our ability to organize and elect change this November and beyond.”