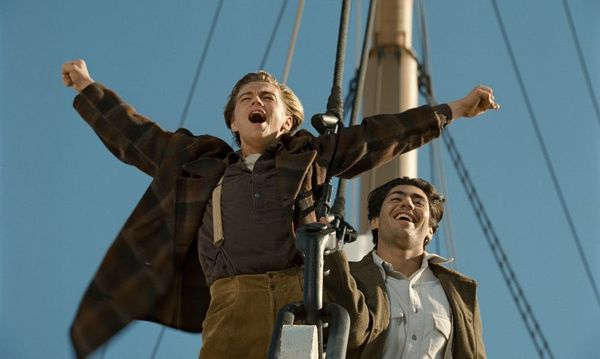 Titanic had so many memorable lines that stars Leonardo DiCaprio and Kate Winslet still recite them to each other two whole decades after the film’s release. But there was one line in particular that DiCaprio didn’t love during filming.

The actor was reportedly not very cooperative when instructed by director James Cameron to deliver the improvised line, “I’m the king of the world!” in the scene at the bow of the ship with actor Danny Nucci (Fabrizio).

“It was made up on the spot,” Cameron recently told BBC’s Movies That Made Me of the defining line. “I was in a crane basket, and we were losing the light. I had tried this and we had tried that, tried this line and that line, and it was just coming up snake eyes.”

That’s when he came up with the now-iconic quote. “And I said, ‘Alright, I’ve got one for you. Just say, ‘I’m the king of the world,’ and just spread your arms out wide and just be in the moment and just love it and just celebrate it and love it,'” Cameron continued. “And [DiCaprio] goes, ‘What?'”

The actor, then just in his early 20s, reportedly continued to question the director about the line. But he eventually performed it just as Cameron had envisioned it, and the rest, as they say, is history.

In 2017, when Winslet revealed to Glamour that she and DiCaprio still quoted dialogue from the blockbuster film as an inside joke, she didn’t elaborate on which lines they always went back to. “You don’t even want to know the last conversation we had, because it was so funny and made me laugh so much,” the actress teased. “We’re very, very close and sometimes we do quote the odd Titanic line back and forth to each other, because only we can, and we find it really funny.”

Can you imagine Titanic without the “king of the world” line? Let us know @BritandCo!