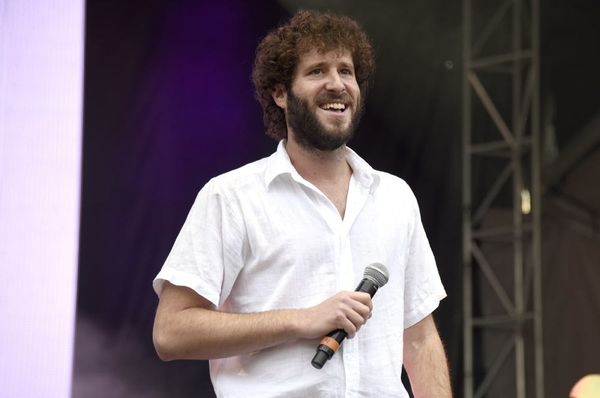 Comedian and rapper Lil Dicky released a new star-studded music video at midnight ET on Friday, April 19, as part of an effort to draw attention to climate change ahead of Earth Day on April 22. The animated video, which clocks in at around seven minutes long, features several of Lil Dicky’s famous friends, including Justin Bieber (as a baboon), Ariana Grande (as a zebra), Shawn Mendes (as a rhino), Leonardo DiCaprio (as a cartoon version of himself), and literally dozens of others.

The video begins with a news report covering the extreme heat and wildfires that have ravaged California in recent months. As the camera zooms out from the TV, we see trucks leaving trails of exhaust on streets littered with trash. Nearby, some kids knock over a garbage can, spilling even more waste onto the sidewalk.

That’s when Lil Dicky walks up. He and the kids exchange some (literal) trash talk, and then he leaves, telling them to pick up the garbage. One of the kids stays behind and begins to clean up the mess, at which point he finds a mysterious book with a picture of Earth on its cover. When he opens it, a live bird flies out — and then an entire world springs up between the pages.

As an animated Lil Dicky rides a giant bird through the air, we’re swept into the stunning, lush scenery, where we meet a baboon singing with Justin Bieber’s voice. “Hi! I’m a baboon,” he tells us. “I’m like a man, just less advanced and my anus is huge.” (Yes, you read that right.)

From there, we see several other animals and living things, each with the voice of a major celeb. There’s Grande as a zebra, Halsey as a lion cub, Zac Brown as a cow, Brendon Urie as a pig, Hailee Steinfeld as a mushroom, Wiz Khalifa as a skunk, Snoop Dogg as a weed plant, and Kevin Hart as… Kanye West.

If you listen closely, you’ll also hear Adam Levine (as a vulture), Shawn Mendes (as a rhino), Charlie Puth (as a giraffe), Sia (as a kangaroo), Miley Cyrus (as an elephant), Lil Jon (as a clam), Rita Ora (as a wolf), Miguel (as a squirrel), Katy Perry (as a pony), Lil Yachty (as HPV), Ed Sheeran (as a koala), Meghan Trainor (singing “We love you, India”), Joel Embiid (“We love you, Africa”), Tory Lanez (“We love you, China”), the Backstreet Boys (singing the credits), and John Legend, Bad Bunny, PSY, and Kris Wu (singing the refrain).

While the video is quirky and includes some NSFW language, the message is serious, as Lil Dicky explains near the end. “Come on, everybody, I know we’re not all the same, but we’re living on the same earth,” he says. “I mean, there’s so many people out there who don’t think global warming’s a real thing, you know? We gotta save this planet! We’re being stupid.”

He then introduces an animated version of DiCaprio, who stands on the bow of the Titanic with the earth in his hands. “Guys, everybody look into whatever the f–k Leonardo DiCaprio is always pushing,” Lil Dicky continues. “‘Cause I feel like that guy knows more about the earth and how we’re f–kin’ it up than anybody. Like if aliens did come, we should definitely send Leo as our guy, our rep.”

Thank you to @lildickytweets and all the artists that came together to make this happen. Net profits from the song, video, and merchandise will go to many @dicapriofdn partners on the frontlines of implementing solutions to climate change. #WeLoveTheEarth https://t.co/3u8cyA6NPq pic.twitter.com/cpMeTB4Ziq

After the video was released, DiCaprio tweeted about the good it will hopefully do. “Net profits from the song, video, and merchandise will go to many @dicapriofdn partners on the frontlines of implementing solutions to climate change,” he wrote. “#WeLoveTheEarth”

Desiree O
Desirée O is a ‘Professional Bohemian’ who loves anything and everything related to the arts, entertainment, and pop culture. She ADORES being a ‘Newsy’ for Brit + Co, covering all of the latest tidbits of awesomeness that you want to read about. When she’s not writing, she’s either making messy art, going on long adventurous walks with her camera, or poking around over at bohemianizm (http://www.bohemianizm.com/). You can find out about Desirée O and her work at http://DesireeO.com/ or follow her on Twitter @DesireeO.
Celebrities
Music
Celebrities Celebrity Earth Day Music
More From Music