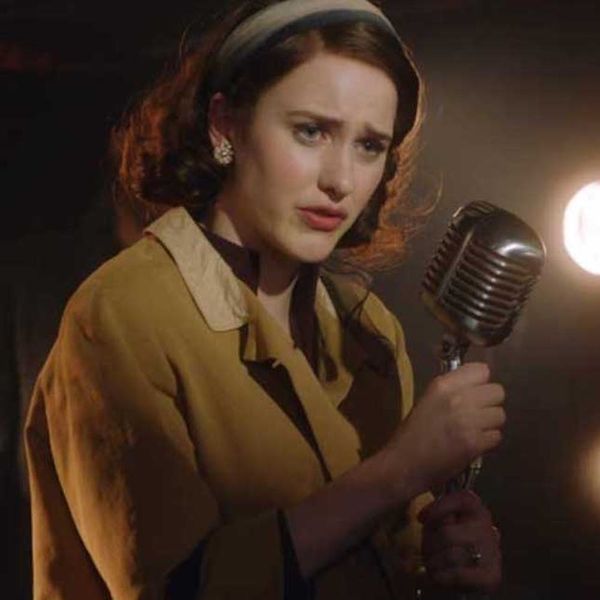 The third episode of The Marvelous Mrs. Maisel, pointedly titled “Because You Left,” cements Midge’s friendship with comic Lenny Bruce in a really cute, organic way as Midge finally begins to accept her new life and consider that this is possibly what she was always meant to do. But her journey to arrive at that point is a melancholy one, as it would be for anyone who is realizing their whole life is kind of a sham.

After going to jail for the second time within a week, Midge has to appear in court. Susie gets her a lawyer, Michael Kessler, who looks like he’s on the verge of getting Midge off with a slap on the wrist. But Midge can’t resist giving the judge a piece of her mind — and he totally has it coming, because he’s being a pompous, condescending butthead — and in court, even if the judge has it coming, it’s generally better to just remain quiet. The judge puts her in lock-up for contempt and she must then ask Joel for $250 cash to get her out.

When she calls, Midge tells Joel he can’t know what it’s for and he can’t ever ask her about it, which piques his curiosity, even though he does give her lawyer the money with no questions asked. Midge insincerely apologizes to the judge and pleads guilty, which nets her a sentence of time served — not too bad considering she could have been ordered to pay $1,000 and spend up to three months in jail.

All this secrecy from Midge, coupled with him not wanting to actually be with Penny Pan, has Joel realizing what a colossal mistake he made, so he comes to Midge by episode’s end and asks to reconcile. Of course, he still manages to do it in a totally condescending way by telling her he’s “thinking about” giving them another shot. Thankfully, Midge has finally woken up to what her life was and what it could be, and she tells him to kick rocks. When he asks her why, she says rather incredulously, “Because you left.”

Imagine that. A woman who was abandoned by her husband because he bombed at a comedy club and had been having an affair doesn’t want to get back together just because you decide you’ll deign to give her another shot.

While all of this is going on with the legal troubles and Joel’s regret, there’s also a terrific storyline of Lenny Bruce bailing Midge out of jail (because she bailed him out, so he owes her) and then inviting her to a jazz club where he’s the opener for a jazz ensemble.

At the club, Midge befriends the band through Bruce and smokes pot for the first time, earning the band members’ respect because she’s been arrested twice now. Bruce lets her do the second intro for the group and she launches into a terrific-but-sad riff about how she’s not really meant to be a mother, as evidenced by the fact that she doesn’t even have a picture of her kids in her purse.

Usually, it’s fun to watch Midge tell her story on stage, but this time it’s different because instead of maligning a cheating husband, the target of her ire is her two young children, who obviously have no control over anything. And Midge isn’t truly angry at them, or even angry at all. It’s more that she’s sad for herself that she ended up in this life and now her children are the collateral damage.

It juxtaposes nicely with Midge having to tell her father that she isn’t reconciling with Joel, even after Joel said he wanted to. The look on Abe’s face is interesting. He clearly cares a great deal for his daughter and his grandchildren, but it’s tough to read his reaction. Is he heartbroken for his daughter being alone? Is he upset because he shelled out the money to buy half the apartment from Moishe Maisel? Is he sad because he doesn’t know what she’s going to do now? I’m choosing to believe it’s out of pride that she stood up for herself and didn’t just bow down and thank Joel for coming back.

That may be giving Abe too much credit, though. It’s hard to say, but it’s a fittingly melancholy ending to a rather sad episode.

Inmate No. 1: “I would listen to her, she looks like she knows what she’s talkin’ about.”

Inmate No. 2: “I wonder if she has other tips for, like, bullet holes and stuff?”

Susie: “Your mother, that’s what’s wrong … Yeah, I called her and it was awful … She was spinning webs around me, man. She was like an evil, web-spinning spider death sorceress. I almost confessed to the Lindbergh kidnapping.”

Kessler: “You start controlling speech, you’re slip-sliding towards fascism. And we all saw how that turned out.”

I had some serious clothing envy during the scene where Midge and Imogene (Bailey De Young) were walking their baby prams in the park. Their frocks with matching overcoats, hats and gloves were too much. So beautiful.

What do you think of the show so far? Tell us @BritandCo!