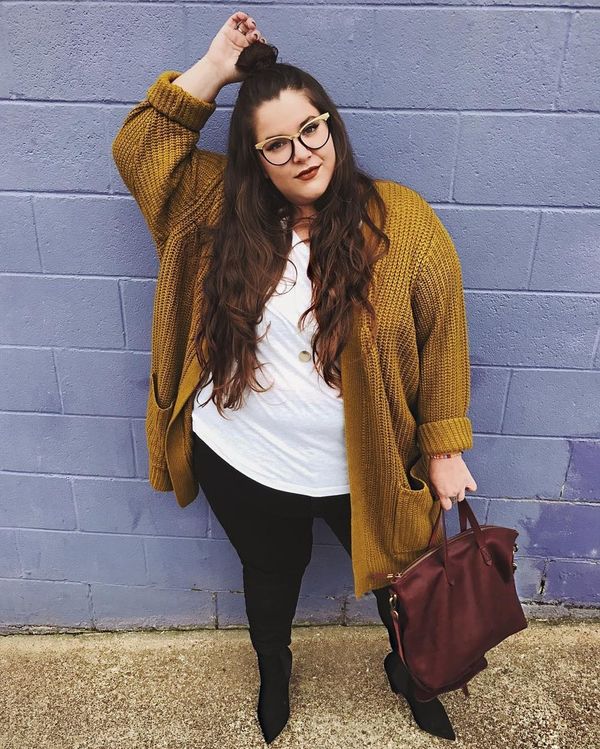 Meet Natalie Hage, a 30-year-old plus-size model from Dallas, Texas. As one of the moderators of Tess Holliday’s EffYourBeautyStandards account, Hage is all about promoting body positivity. Just last week, while on her way to Los Angeles to take part in a body-positive modeling shoot, she encountered a fellow passenger who decided to fat shame her.

Flying can cause anxiety for anyone. From the narrow seats to the tricky game of armrest tango, it can create all kinds of uncomfortable situations. But it’s worse for some people.

Stacy Bias, the author of Flying While Fat, spoke about her own experiences in an interview with BuzzFeed last year: “Trust that when you’re next to a fat person on a plane, they are significantly less comfortable than you are and are likely doing everything in their power to minimize their impact on you.”

Hage, who wanted to curb many of these anxieties ahead of time, paid $70 extra for more leg room. But for her male seatmate, it wasn’t enough. Almost immediately, Hage could sense by his audible huffs and puffs that he was uncomfortable. She shared via social media how she kept trying to shrink herself, explaining in an interview with Guidelive, “I didn’t think twice about him until he started acting so dramatically, huffing and puffing and jerking around in his seat.”

That’s when Hage noticed that her seatmate was texting a friend — and that the texts were derogatory comments about her size.

According to Hage, the man took his armrest and hers, and continued to text his friend throughout the flight that he was “so squashed he left a neck mark on the window.” By this point, Hage had begun to document the harassment on social media, updating her followers about what was taking place. She eventually built up the courage to confront him at the end of the flight.

Watching the video of Hage take down her fat-shaming seatmate is eye-opening. She’s calm, cool, and collected, never raising her voice once. Of course, her seatmate is totally embarrassed and shocked by what is happening, at first denying he sent the texts and then apologizing and saying that he had “been drinking.” Hage came back at him with, “You never know who you’ll hurt with those kinds of things. You made me feel so uncomfortable to exist in this seat.”

On her Instagram, Hage explained, “This is a fat person’s daily reality and not just on a plane.” Since her encounter, she has been receiving a ton of positive feedback online. Her experience has brought to light the types of discrimination people experience on a daily basis. As she wrote in her post, “It doesn’t matter how or why you might be overweight or you might be fat, but you still deserve to be treated like a human being.”

Have you ever stood up to someone who made you feel bad about yourself? Tell us @BritandCo.

Amanda Scriver
Amanda Scriver is a passionate storyteller and body image advocate based out of Toronto, Canada. When she isn't writing for various publications, she finds time to Keep Up With The Kardashians while partaking in life's greatest pleasure: the chip buffet. Don't ask her what her favorite restaurant is, it's complicated
Every Body
Diversity
Every Body
More From Diversity