14 TV Weddings That Will Make You Believe in True Love 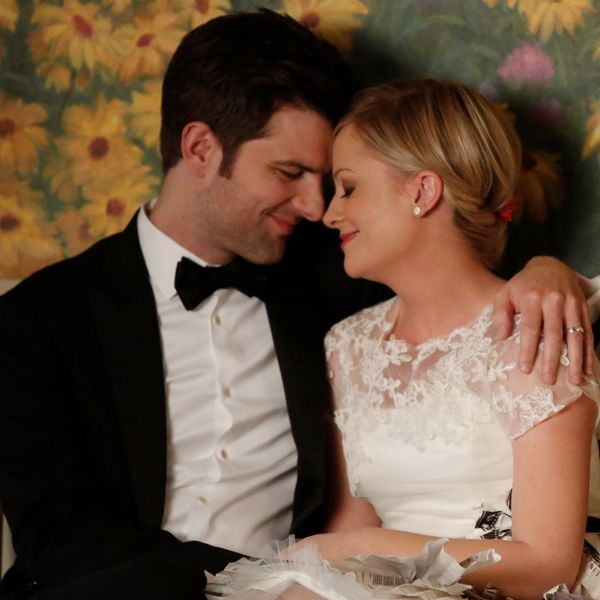 We love a good TV wedding. Or a bad TV wedding, for that matter. (Emily and Ross, Cristina and Burke, we're looking at you.) It's hard to pick a favorite among the countless pairs who've walked down the aisle over the years, but these weddings — these couples — made us believe in happily ever after.
Leslie and Ben, Parks and Recreation (Season 5, Episode 14): Ben and Leslie are one of our all-time favorite TV couples, and their wedding was a culmination of everything we loved about them, the show, and the Pawnee Parks Department crew as a whole. And don't even get us started on those perfect vows — we tear up just thinking about them! (Photo via Tyler Golden/NBC/NBCU Photo Bank via Getty Images)
Phoebe and Mike, Friends (Season 10, Episode 12): Thanks to a blizzard, Phoebe and Mike's wedding almost didn't happen, but the friends pulled together to make it work. It wasn't the ceremony they planned, but we honestly can't imagine it any other way. (Photo via NBCU Photo Bank)
Booth and Brennan, Bones (Season 9, Episode 6): After years and years of sexual tension and will-they-won't-they buildup — not to mention an unexpected pregnancy — Booth and Brennan finally tied the knot in a ceremony attended by their closest family and friends (and the Jeffersonian interns who helped solve the murder that threatened to interfere with their plans). (Photo via FOX via Getty Images)
Castle and Beckett, Castle (Season 7, Episode 6): Caskett's first attempt at a wedding was derailed by a car crash and Castle's subsequent abduction. So for their second — which happened after Castle entered an alternate universe where they'd never met — they eloped to the Hamptons, with just his daughter, Alexis, and mom, Martha, as witnesses. (Photo via Richard Cartwright/ABC via Getty Images)
Crosby and Jasmine, Parenthood (Season 3, Episode 18): Only the Bravermans could pull together the perfect backyard wedding — complete with a gospel choir singing "To Make You Feel My Love" — in less than a week. Can we hire them to plan our next party? (Photo via Chris Haston/NBC/NBCU Photo Bank via Getty Images)
Jesse and Becky, Full House (Season 4, Episodes 18 and 19): Jesse almost ruined things with his "one last adventure" nonsense, but he more than made up for it with that "Forever" serenade after their vows. (Photo via ABC Photo Archives/ABC via Getty Images)
Kevin and Scotty, Brothers and Sisters (Season 2, Episode 16): Kevin and Scotty made their commitment to each other official in the season 2 finale, and there wasn't a dry eye in the house — ours or theirs. (Photo via Michael Desmond/ABC via Getty Images)
Schmidt and Cece, New Girl (Season 5, Episodes 21 and 22): Schmidt actually missed his wedding — because he flew to Portland to convince Cece's mom to attend — so the roommates staged an intimate, impromptu ceremony in the loft when he got home. It was far from the fancy affair he worked so hard to plan, but it was perfect nonetheless. (Photo via Adam Taylor/Fox)
Jim and Pam, The Office (Season 6, Episodes 4 and 5): Jim and Pam's actual wedding, like many of the weddings on this list, was a disaster, but luckily, Jim had a backup plan — getting married on a boat before their big church ceremony. "The boat was actually Plan C, the church was Plan B, and Plan A was marrying her a long, long time ago," he said. "Pretty much the day I met her." SWOON. (Photo via Byron Cohen/NBCU Photo Bank)
Liz and Criss, 30 Rock (Season 7, Episode 7): Liz and Criss' wedding was just as wonderfully weird as they were. Liz was determined not to make a big deal out of it — after all, they were getting married mostly to look good for adoption agencies — but in the end, it was a big deal. And can you imagine a more perfect wedding dress for Liz Lemon than a Princess Leia Halloween costume? (Photo via Ali Goldstein/NBC/NBCU Photo Bank via Getty Images)
Monica and Chandler, Friends (Season 7, Episodes 23 and 24): Despite several pre-wedding near-disasters — including the groom getting cold feet and disappearing — Monica and Chandler said "I do" in the season 7 finale, with Joey (still in costume from his WWI movie) officiating the ceremony. We laughed, we cried, and then, when it was revealed that Rachel was pregnant, we gasped. Well played, Friends, well played. (Photo via Danny Feld/NBCU Photo Bank)
Morgan and Tamra, The Mindy Project (Season 6, Episode 10): Morgan and Tamra's wedding was, predictably, a comedy of errors, but it also showed why they're perfect for each other. Bonus: Seeing how happy they were inspired Mindy to go after Danny. (Photo via Jordin Althaus/Hulu)
Lily and Marshall, How I Met Your Mother (Season 2, Episode 21): Everything that could have gone wrong at Marshall and Lily's wedding did go wrong, but they had their perfect ceremony in private, with just their best friends — Ted, Robin, and a *very* emotional Barney — as witnesses. Marshmallow and Lilypad forever! (Photo via Richard Cartwright/CBS via Getty Images)
Jack and Rebecca, This Is Us (Season 1, Episode 14): Jack and Rebecca's actual wedding isn't that memorable — and the episode in which it occurs finds them on shaky ground down the road — but their marriage, which is the whole point of a wedding anyway, is one of the best on TV. (Photo via Ron Batzdorff/NBC)