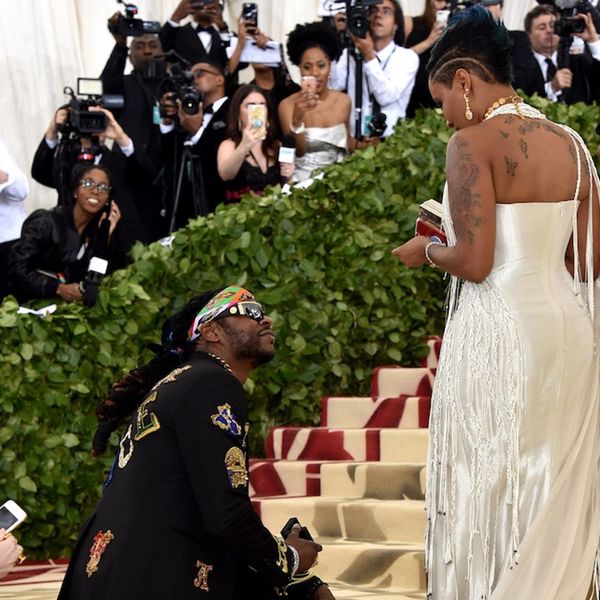 It’s a night where audiences are prepared to expect the unexpected but in a move that left people both aww-ing and scratching their heads, musician 2 Chainz got down on one knee at the Met Gala and proposed to his longtime sweetheart Kesha Ward Epps. Thing is, the two were already engaged. We think.

On the steps of the Metropolitan Museum of Art in front of fashion’s most valuable players, the rapper got down on one knee and presented his lady love with a diamond ring — and she seemed genuinely surprised. The two share three children, daughters Harmony and Heaven and son Halo, and have been together for several years. (Photo VIA John Shearer/Getty Images for The Hollywood Reporter)

Kesha wiped away tears, then flashed her bling for the cameras upon receiving what is her second proposal from her man. The first was at the 2013 BET Awards — but who’s counting? (Photo via Jamie McCarthy/Getty Images)

Whether they never made it down the aisle the first time or 2 Chainz is just so romantic that one proposal/wedding isn’t enough, congratulations are in order for the happy couple. Surely, its a night they’ll never forget. (Photo by Mike Coppola/MG18/Getty Images for The Met Museum/Vogue)

What was your fave Met Gala moment? Let us know over @BritandCo.