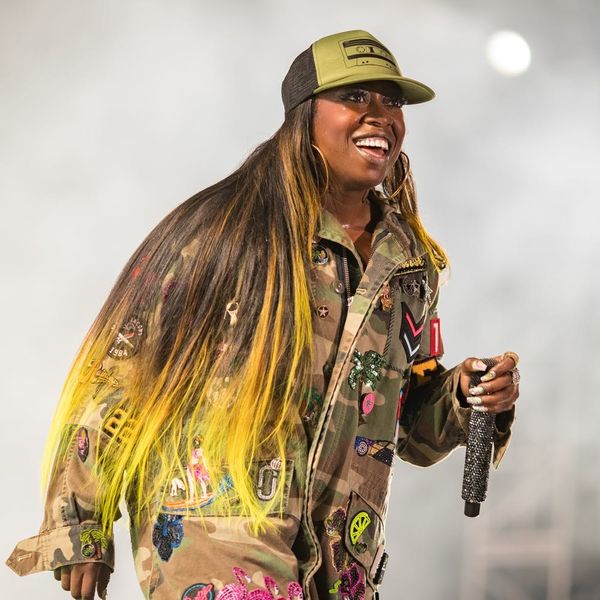 Over the weekend, Songwriters Hall of Fame chair Nile Rodgers announced the organization’s 2019 inductees. Included on the list was rap legend and producer Missy Elliott, who will become the first woman rapper ever to join the Hall of Fame. In fact, Elliott will be only the third rapper of any gender (after Jay-Z and Jermaine Dupri) to receive the Hall of Fame’s distinction.

With a career that spans over 20 years, and songwriting credits on some of the biggest hits of the last two decades, it makes sense that Elliott would be considered for her contributions to music. Elliott’s debut album, 1997’s Supa Dupa Fly,is considered one of the best rap records of all time. But beyond her expertly crafted songs, the emcee’s embrace of herself — as a full-figured, dark-skinned Black woman — was body positive before we knew what body positivity was.

In an essay for Black Girl Nerds, pop culture writer Kelly Glass points to Elliott’s debut video for her now-culturally ubiquitous song “The Rain (Supa Dupa Fly)” as the artist’s entry into the annals of feminist legends. That video was where we were first introduced to the rapper, complete with a garbage bag outfit, short hair, and dark skin. Proudly showing off her look, Elliott raps, “I’m super fly, I’m supa dupa fly,” suggesting to the world that the male-dictated, white-focused beauty ideals that were so standard at the time weren’t even on the singer’s radar.

Even the content of her music — which often centered on her sexually empowered female voice — encouraged self respect and sexual liberation in the women listening. Songs like “Work It,” “One Minute Man,” and “Sock It 2 Me” bring a woman’s perspective to the rap genre’s longstanding tradition of exploring sexual themes. These songs remind women listeners not only that they, too, are allowed to be sexy, but also that they can and should ask for what they want.

Elliott is the only female rapper to have six certified platinum albums, and has written empowering hits for legends like Whitney Houston, Beyoncé, Ciara, Janet Jackson, and Aaliyah, among others.

On the 2019 inductees, Rodgers said in a statement: “The 2019 slate of inductees represents diversity and unity across genres and gender, highlighting our dedicated mission to honor music creators who have enriched our lives. These are writers who in their time literally transformed music and helped make what’s happening today possible.”

Established in 1969, the Songwriters Hall of Fame has more than 860 genre-spanning inductees. The group of nominees for 2019 Hall of Fame induction was announced in November, and included Chrissy Hynde, Annie Lennox, and Mariah Carey. Elliott is the only woman of the cohort to be selected for honors this year.

I want to CONGRATULATE all the AMAZING songwriters who have been inducted into the 2019 “Song Writers Hall of Fame🙌🏾🙌🏾 also those who were nominated because their body of work is AMAZING🙌🏾 I AM SO HUMBLY GRATEFUL to now be inducted also🙏🏾 I ❤️you all🤗 #SHOF2019 ✍🏾 pic.twitter.com/6LRHFoeVz1

“I want to CONGRATULATE all the AMAZING songwriters who have been inducted into the 2019 “Song Writers [sic] Hall of Fame,” Elliott tweeted over the weekend. “also those who were nominated because their body of work is AMAZING. I AM SO HUMBLY GRATEFUL to now be inducted also. I love you all.” Elliott will be officially inducted in a ceremony in June in New York city along with Yusuf Islam (formerly known as Cat Stevens), John Prine, Tom T. Hall, Dallas Austin, and Jack Tempchin.

Kat Armstrong
Kat has been a writer, social media maven and mom for longer than she's willing to admit. She's also spent time in front of and behind the camera, interviewing celebs, politicians and acting as a producer for fashion and artistic photography shoots. When she isn't writing for various orgs and publications, she's hanging with her kids, husband and French Bulldog, Peter, in Toronto, Canada.
Feminism
Empowerment
Feminism Music
More From Empowerment