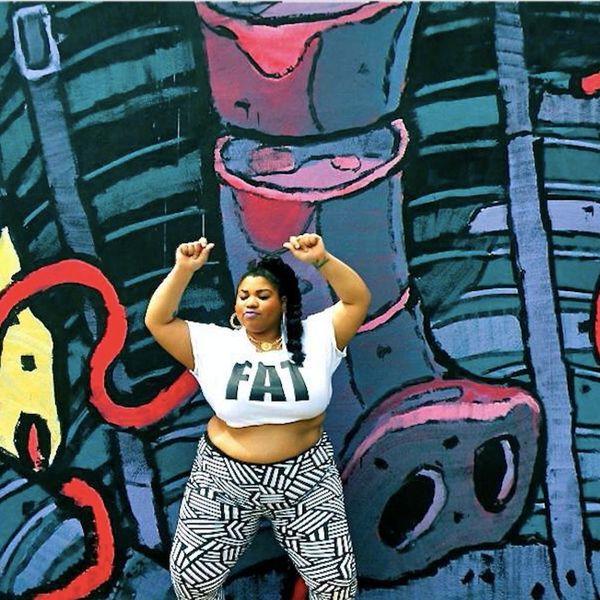 Ashleigh Shackelford, the Atlanta-based founder of body liberation community organization Free Figure Revolution, realized that the body liberation movement had a major problem. While most people are aware of fatphobia and the stigma that people in fat bodies face, there isn’t much data to quantify what this means in terms of the population at-large. So Shackelford and the Free Figure Revolution developed the Fat Census to help illustrate the interrelated factors that contribute to plus-size people’s experience of oppression, in concrete figures.

“Violence happens to us every day, but there is no respectable form of data to prove that we are oppressed,” Shackelford tells Brit + Co. “The census is one part of fat liberation, the smoking gun. But shots have already been fired.”

The census launched on November 7, 2017, but its origins stretch back to Shackelford’s undergrad days at Virginia Commonwealth University. At that time, she’d already been active in body positive activism by directing community programs and rallies and organizing safe spaces for diverse bodies on campus. Then, the 2014 police shooting death of 18-year-old Michael Brown in Ferguson, Missouri caused her body liberation activism work to shift toward a Black liberation framework.

“Body liberation was only ever going to happen directly through the lens of collective Black liberation,” Shackelford told Brit + Co.

Shackelford says she came to realize that the realities of anti-Blackness, which lies “at the heart and crux of white supremacy,” are intertwined with “the oppressions of fatphobia, ableism, colorism, and queerphobia.” Put another way, society’s designation of some bodies as acceptable and other bodies as unacceptable is ultimately an expression of white supremacy.

Alongside her colleagues Shavontae Patrick, Danielle Gaines, and Shannon Davis, Shackelford launched the Free Figure Revolution in an effort to continue building a bridge between the two movements: body liberation and Black liberation. The Fat Census aims, in part, to make that connection concretely visible.

“Fatphobia is inextricably anti-Black, and a phenom that specifically targets the other-ness of Blackness, dark skin, and gender deviant bodies,” explains Shackelford “By releasing the [Fat Census] data, we will highlight the realities that compounded violence against Black fat bodies by sharing specific experiences with very specific threats to life.”

90 percent of the census questions were developed by Shackelford herself, drawing from extensive research on anti-fat violence and its erasure. From there, the Free Figure Revolution team enlisted Brown Girl Recovery creator-director Brienne Colston, poet Shay Patrick, writer YrFatFriend, anti-oppression worker and fat activist Sonalee Rashatwar, and fat activist Marilyn Wann for feedback to ensure that the census questions were as inclusive and purposeful as possible.

The Fat Census amassed over 6,000 responses by the end of December. Now, the team is in the midst of pulling together the data they compiled to create a report that will illustrate the challenges faced by fat bodies and identities.

“Data often feels distant, cold, respectable, institutionalized, very expensive, and white as f*ck,” Shackelford explains sharing that at the beginning of March, they plan to release the data as an executive summary and as an art gallery show simultaneously instead of soft releasing of the data. “We want to transform data by making it accessible, artistic, visual, sensory, and Afrofuturistic. This will be free and accessible to the world for all-purpose usage.”

While the Free Figure Revolution team prepare the census for release, they continue to solicit donations via their website. Shackelford says these funds will be put towards registering the organization as an official non-profit and creating brand new community programming for 2018 that includes a body liberation prom. “Fat communities are so deeply underfunded, underrepresented, undermined, and erased. We deserve to be heard, to be seen, to be counted, and to exist.“

The Fat Census data and art show are tentatively scheduled for March 2018.

Tell us what you think about the Fat Census @britandco!

Amanda Scriver
Amanda Scriver is a passionate storyteller and body image advocate based out of Toronto, Canada. When she isn't writing for various publications, she finds time to Keep Up With The Kardashians while partaking in life's greatest pleasure: the chip buffet. Don't ask her what her favorite restaurant is, it's complicated
Body Positive
Body Positivity
Body Positive Every Body inclusivity