Can I Shave or Pluck My Hairy Moles? 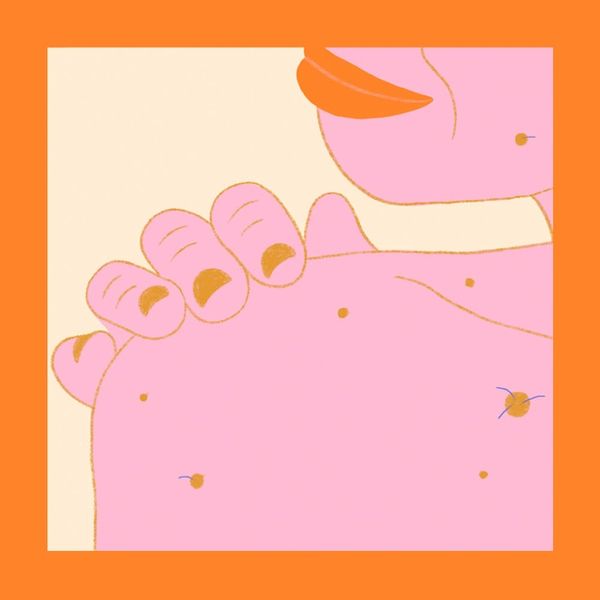 As much as we love swapping tips and tricks to solve our biggest beauty dilemmas, there are some questions we may not feel comfortable asking our friends about, let alone Google without going incognito. Don’t worry. We’ve got you covered. In this series, we’re tackling those embarrassing beauty queries by turning to experts in the field to get you the answers you need — minus any awkward feelings.

Moles come in a variety of shapes, sizes, and hues. But a few also house something extra: hair. Sure, some choose to let those small strands stick around, but if they really wreck your mood, you can remove them. To help you proceed with your plucking, we turned to top dermatologists to understand why some moles come with a few extra follicles, and what the best hair removal options are so that you won’t put the pigmented cells at risk. Follow along!

At the Root of It

Moles are made of pigmented cells called melanocytes that can form in any of the skin’s layers. “They can be pretty high in the skin (epidermal or junctional moles), deep in the skin (deep dermis or dermal moles), or in both of the areas (compound moles),” says Boston-based dermatologist Papri Sarkar. That also includes where the hair follicles are located in the dermis layer of the skin. (Photo via Westend61/Getty Images)

But, according to Hadley King, clinical instructor of dermatology at the Weill Medical College of Cornell University, those hairs shouldn’t be cause for concern no matter where they pop up. “Some people think that a mole with hair is more likely to become cancerous than other moles or that removing the hair can cause or trigger cancer,” she explains. “There is no scientific evidence for these statements. Because hair is produced by an entrapped hair follicle and not the mole itself, the presence of hair nor the process of removing it has any effect on whether the mole will develop into cancer.” So while there’s nothing wrong with having a little bit of hair — it’s a sign that the skin is healthy — that doesn’t mean you can’t get rid of it if you really want to.

Lucky for us, there are plenty of hair removal options available. Shaving offers the instant gratification of smooth skin and is relatively safe, as long you’re careful not to nick the skin. “It is not a problem to shave hair off a mole… just be gentle, so it does not become irritated or bleed,” advises Diane Berson, an NYC-based dermatologist, owner of Diane Berson Dermatology, and member of the Women’s Dermatologic Society. While you might be tempted to use a razor when you’re already in the shower and shaving other areas, she suggests waiting until afterward to get a smooth finish while the pores are still open. (Photo via ballyscanlon/Getty Images)

As quick as shaving can be, many of the derms we spoke with actually prefer tweezing since pulling the hair from the follicles can keep hair at bay for four to six weeks. When plucking, instead of pulling willy-nilly at your mole hairs, you should sanitize the tweezers and grab the hair at the base to pull it out as gently as possible.

Since the pores are often left open after plucking or tweezing, keep the area clean to prevent pimples. Sarkar suggests using a foaming cleanser like CeraVe Fresh Foaming Cleanser ($15) or one with a mild physical exfoliant like Tata Harper Regenerating Cleanser ($82). Another word of advice: Keep your hands off the newly smoothed skin. “Don’t touch the area after plucking, and don’t apply something occlusive after tweezing like Vaseline or Aquaphor,” she says. Though if you still end up with a zit, a gentle salicylic acid spot treatment should be enough to get rid of it.

Depilatories can be a bit more tricky since there are chemicals involved, but they can also offer up to a week’s worth of smooth skin as long as you’re careful. While the experts approved of many of the brands you’d find at the drugstore, they say you should take the time to follow the instructions to a T, including a patch test. “I would be really cautious about it because we look for irritation or bleeding as a sign of things changing in a mole,” says Cameron Rokhsar, associate clinical professor of dermatology at Mount Sinai Hospital. “And irritation, bleeding, or spontaneous change would warrant a biopsy. If you’re irritating your mole, we lose those diagnostic criteria.”

After all of the aforementioned hair removal techniques, should you decide that having your mole hair come back is too much of a hassle, there are more permanent solutions out there, including electrolysis and lasers. While some might be concerned about the effects they can have on darker skin, Jason Emer, a Beverly Hills-based board-certified dermatologic surgeon, says that there are lasers that can work without harming the skin pigments, though you should talk to your doctor or a certified technician to see if it’s right for you. “It can be used on any skin type, and [targeted] just to the hair follicle,” he says. “With lasers for skin of color [or moles], you want to make sure you use longer wavelength lasers, like a YAG [or Nd:YAG laser].” (Photo via gilaxia/Getty Images)

Have any more awkward beauty questions? Let us know @BritandCo!

Valis Vicenty
Valis Vicenty is beauty writer who started swatching lipstick when she was still in diapers (sorry Mom!). Her work has been featured on Refinery29, NewBeauty, and Glam.com, plus she maintains her own beauty and lifestyle blog, Val’s Vanity, where she regularly shares her favorite finds and inspirations. When she’s not scrolling through her social media feeds for an emerging trend or test-driving the newest beauty buy, you can find her binging on comedy specials and classic movies on Netflix, listening to the latest bestseller as an audiobook, or adapting a new recipe to whatever’s in her fridge.
Asking for a Friend
Skincare
Asking for a Friend Beauty Confessions Skincare products