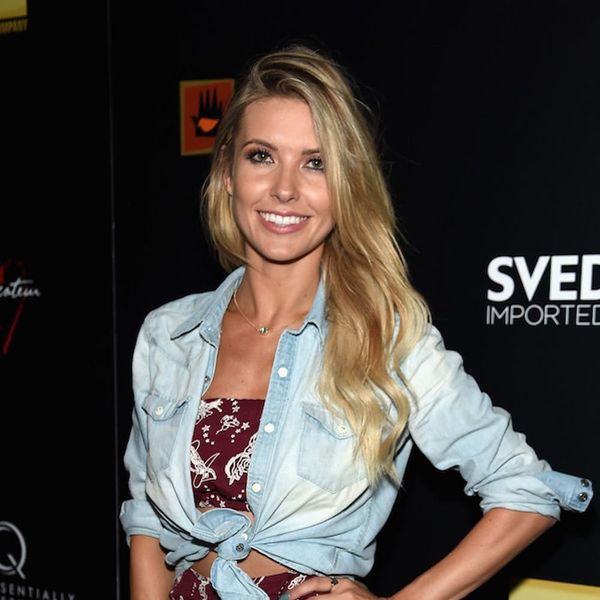 From our first glimpse at Audrina’s new daughter to a dream come true for Simone Biles, check out six news items causing some buzz this morning below.

1. We haven’t seen much of Audrina’s new bundle of joy, baby Kirra, but her latest Instagram is not only the first real look at her, but a dose of new mom reality. Audrina, who is planning her upcoming wedding to fiancé Corey Bohan, had to stop for a feeding mid-dress try. “@caseyloza always capturing a moment,” she wrote. “Nursing Kirra while trying to find the perfect wedding dress. #professionalmultitasker #itscrunchtime.” Does she have to buy that one now?!

What a weekend! Meant to get this up yesterday, but was too busy celebrating. HAPPY BIRTHDAY to my baby!!!🎉❤️😘

2. Jesse Metcalfe and longtime girlfriend Cara Santana are engaged!John Tucker Must Die actor Jesse and fashion blogger Cara will be walking down the aisle after over 10 years of dating, according to Us Weekly. Jesse reportedly proposed while the pair were on a 50-foot sailboat in the middle of the Hudson River, giving her a 5.5-carat emerald shaped diamond ring that he designed himself. Not bad, Jesse! Congrats to the happy couple!

3. STOP EVERYTHING: Simone Biles finally met Zac Efron. In case you didn’t know, 19-year-old American hero Simone is a big fan of Zac Efron, and has even admitted to having a life-size cutout of him in her home. Yesterday, after winning her fourth gold medal (!), she actually got to meet her Hollywood crush, sharing some cutesy, friendly smooches. And the affection is mutual: Zac had been tweeting his adoration of her skills in Rio to her last week. TRUE LOVE FOREVER.

4. Taylor Swift is donating $1 million to Louisiana flood relief. Devastating flooding across Louisiana has killed at least 11 people and displaced many, many more, and Tay has stepped up to the plate to donate to relief funds. “We began The 1989 World Tour in Louisiana, and the wonderful fans there made us feel completely at home,” she said in a statement to the Associated Press. “The fact that so many people in Louisiana have been forced out of their own homes this week is heartbreaking. I encourage those who can to help out and send your love and prayers their way during this devastating time.” (Photo via Larry Busacca/Getty)

5. Kevin Smith deeeestroyed the trolls who were bullying his daughter Harley Quinn. Like many teens, never mind the children of celebrities, Harley Quinn Smith was getting some nasty comments on Instagram photos of her. And while she was hurt at first, she later decided to laugh it off, ignoring the haters. Her dad, director Kevin Smith, also stepped in to use his voice and platform to call out the awful behavior, saying, “Here’s a nickel’s worth of free advice for folks like this Troll: if you hate me (or my kid) this much, the better use of your time is to make YOUR dreams come true, instead of slamming others for doing the same. The best revenge is living insanely well — so if you wanna get back at a 17-year-old girl for the grievous crime of enjoying her life, the best way to do it is to succeed in your OWN existence.” We hope this kid took these words to heart in some way.

6. Quote of the day: “I am highly aware of the racism that exists in our country. It is the furthest thing from who I am.” Ellen responds to criticisms that her Usain Bolt meme was racist.

Do you think Ellen’s meme was inappropriate? Chime in over @BritandCo.