Morning Buzz! Michelle Obama’s Carpool Karaoke Is Here and It Is Glorious + More 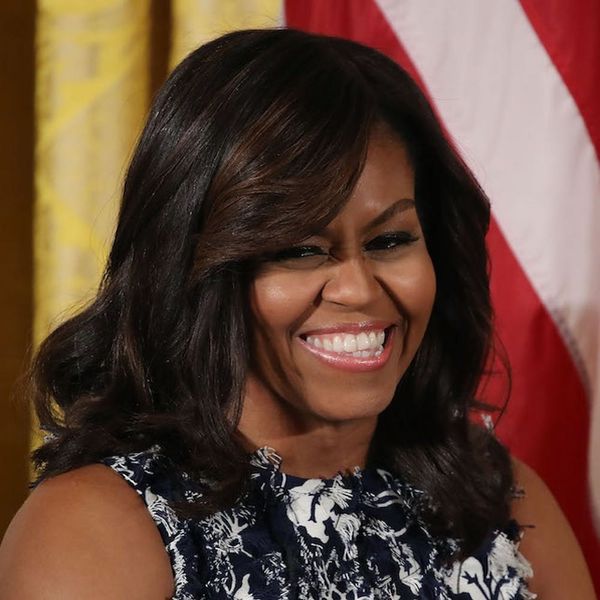 From a rapping First Lady to more #squadsupport for Taylor Swift, check out six of today’s top news items below.

1. Is this the Carpool Karaoke to end all Carpool Karaokes?! The teaser video released earlier this week showed The First Lady channeling her inner Beyoncé, and in the full thing we get to see some seriously impressive rapping skills as Michelle does Missy Elliott’s classic “Get Ur Freak On” — with Missy herself. Many a failed IRL karaoke attempts confirm that this is not an easy one to pull off, and Missy says even she was surprised. “I know for a fact that it was all over my face like, ‘Wait, is she rapping this?’,” she tells People. “But that goes to show you just how cool she is. People hold her in such a high regard — as you should — but she’s so down to Earth. I was just sitting in the back like, ‘I gotta be dreaming. This ain’t even real. Is somebody going to wake me up and say, ‘You overslept.'” Being able to sing along to tunes was a treat for Michelle too: “I rarely get to listen to music in the car,” she says to James Corden in the clip. “I’ve been in a car — maybe it was months ago — with my daughter, learning to drive. That was the only time in seven and a half years that I’ve been in the passenger’s seat listening to music, rocking out like this.”

2. Taylor’s squad member Uzo Aduba has some encouraging words for her friend in the face of Kim Kardashian drama. It’s been four days since Kim leaked footage of Taylor giving Kanye permission to rap about her in “Famous,” even if it feels like a lifetime. While some squad members immediately took to social media to defend their friend, others have been quiet. But at a premiere for her new movie Tallulah, Uzo Aduba said Taylor would rise above the drama, telling Vanity Fair, “She’s a beautiful person and strong.” With friends like this, we don’t doubt it.

3. The RNC has gifted us so many new meme-ories. This week’s plagiarism scandal from the RNC might have left you feeling like it couldn’t possibly be topped, but last night’s appearances contained so much meme gold. From Ted Cruz getting booed after refusing to endorse Donald Trump to a quite questionable wave from Laura Ingraham, even if you were only following along on Twitter, you were entertained/frightened to your very core. But best of all? Trump attempting an awkward half-kiss with VP nominee Mike Pence, a sight you will never unsee. You’re welcome. (Photo via Alex Wong/Getty)

I've been pretty quiet about this, until now. Over the past year, @zara has been copying my artwork (thanks to all that have tipped me off--it's been a lot of you). I had my lawyer contact Zara and they literally said I have no base because I'm an indie artist and they're a major corporation and that not enough people even know about me for it to matter. I plan to further press charges, but even to have a lawyer get this LETTER has cost me $2k so far. 〰 It sucks and it's super disheartening to have to spend basically all of my money, just to defend what is legally mine. ⚡️ EDIT: Some of you are asking how you can help. Repost and tag them, on Twitter, on Insta, on Facebook. I don't want to have to burden any of you with the financial strain that comes with lawsuits.

4. An indie designer is claiming that Zara ripped off her work, and it’s all so disappointing. We love you, Zara, but this is not a good look. LA-based illustrator Tuesday Bassen has opened up about her ongoing battles with the Spanish retail giant, posting side-by-side photos of her work and Zara’s offerings, and we gotta say, it looks pretty damning. “I had my lawyer contact Zara, and they literally said I have no [case] because I’m an indie artist and they’re a major corporation and that not enough people even know about me for it to matter,” Tuesday said in an Instagram post. She said she’s received messages from several other designers who have also been plagiarized by the company. Tuesday will continue the legal process, even though, as she said, it “sucks and it’s super disheartening to have to spend basically all of my money, just to defend what is legally mine.”

5. We have all been this dog getting impatient while waiting in the car. This smart Russian pup couldn’t wait a minute longer for her owner to return and started blaring the horn with its little paw, even howling along with the sound of the horn. The owner is heard giggling as he returns to the car, surely a little embarrassed, but mostly, we hope, really proud.

I couldn’t sleep last night. The moon was too bright and my heart was too full of fresh grief at Garry’s passing. I went outside and sat in the absurd blue-white bath of moon, surprised to see my night shadow, I thought, “Garry left on a good night.” This morning, I got a text from Heather Matarrazzo saying “Of course Garry left on a full moon.” If you know Garry, that he went out when there should be darkness and instead there is full, rare, magic light, is too perfect to be coincidence. It’s so him. Garry was goodness itself. He was generous. He was kind beyond kind. He was thoughtful and sweet and so funny you would pee yourself a little. I met him when I was a child who thought she was a grown-up; he treated me with grace and patience and respect and always, always love. I’m so happy I made three films with him. I’m so happy he blessed my son in my belly the last time I saw him (we never think it will be the last time). Before we made the Princess Diaries, he told me “You never know if a movie is going to be a hit or not. The only thing you can control is the memories you make when shooting it. So, let’s make some good memories.” That advice changed my life even more than the film did. I wish I could say I practice that perfectly, but I can't. Garry loved my rough patches too, and forgave them before I even apologized. He wasn’t interested in judgement or non-plot related conflict. He just wanted to have fun and laugh and do good work. He was so, so smart and canny, and yet he lived entirely from his heart. That’s how he made movies too. You don’t meet a lot of people that kind of courageous nowadays. I couldn’t see it when he was right in front of me, but I see him so clearly now that he has moved on- Garry was a Hero. Not a run-into-a-burning-building-to-save-a-hampster hero per se, but he looked on the bright side of every situation and was unfailingly warm and loving to everyone he met. How simple. How extraordinary. Garry: for a kid from the Bronx with weak lungs, you did good. I’m happy to have known you. I can never thank you enough for my life. I’m going to do my best to be just like you. I love you. Safe travels, my friend.

6. Quote of the day: “This morning, I got a text from Heather Matarazzo saying ‘Of course Garry left on a full moon.’ If you know Garry, that he went out when there should be darkness and instead there is full, rare, magic light, is too perfect to be coincidence.” The Princess Diaries stars pay a beautiful tribute to director Garry Marshall, who passed away earlier this week.

Have you been guilty of a tantrum like the adorable pup above? Tell us your impatient truth over @BritandCo!