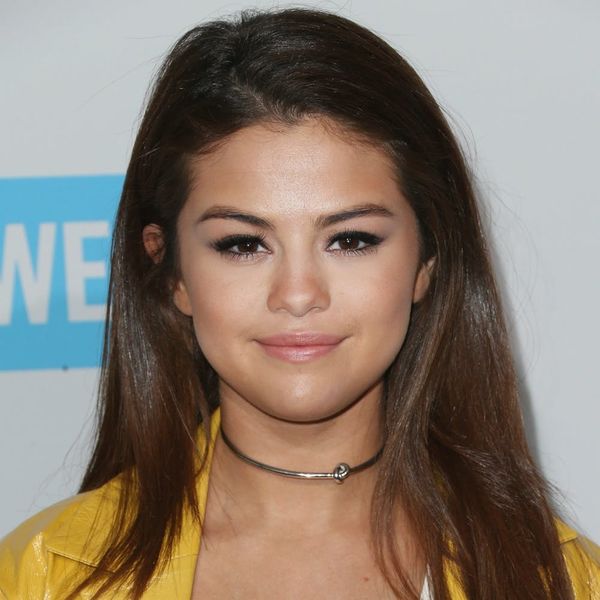 Happy hump day, everyone! From Selena Gomez’s shocking hair transformation to Hilary Swank’s sad announcement, here’s all the buzz you need to know to start your day right.

1. Selena Gomez has BANGS, y’all! It seems like EVERYONE — and we do mean everyone — is switching up their hair these days. From Xtina with her newly minted Jessica Rabbit red to Victoria Beckham with her brand new bob, there’s no shortage of celeb hair reveals as of late. Selena Gomez is the newest member on that list with the brand new bangs she debuted on stylist Marissa Marino’s Instagram. Simply titled “Bangin,” the singer’s locks are also noticeably lighter, but it’s the face fringe that has us absolutely captivated. Looking good, girl!

2: Hilary Swank and Ruben Torres call off their engagement. Annnd another one bites the dust. Despite getting engaged just three months ago with an Instagram announcement that has since been deleted, Hilary Swank and now ex-fiance Ruben Torres have officially called off their engagement. No reason has been given for the split, but judging from the sheer volume of recent couple breakups (*cough cough* Demi and Taylor), maybe it was inevitable? Bad things are said to happen in threes, after all! (Photo via Pascal le Segretain/Getty)

Last night, the @yogahosers went to Prom! @harleyquinnnn_ & @lilyrose_depp had dates of course but (ever on guard for thee) they were there strictly to chew bubble gum and squish Bratzis! And from all reports, they were all out of bubble gum... #harleyquinnsmith #lilyrosedepp #yogahosers #thecolleens #prom #losangeles #harleyquinn

3. Lily Rose Depp does prom. Though dad Johnny is embroiled in some heavy controversy ATM, his daughter, Lily Rose Depp, proves she’s just your average teenager at heart, attending prom alongside the rest of her classmates. Seen in this photo posted by @thatkevinsmith, Lily looks beautiful in a peach snakeskin gown. “Last night, the Yoga Hosers went to prom!” wrote the upcoming film’s director, Kevin Smith, on his Instagram page. “@harleyquinnnn_ and @lilyrose_depp had dates of course, but they were strictly there to chew bubble gum and swish Bratzis!” Kevin said, a reference to one of the film’s characters. Good for you, Lily.

Strap on your proton pack, the #Ghostbusters trailer is here. [link in bio]

4. Today is national Ghostbusters day. Whether you’re a superfan of the 1984 original or are chomping at the bit for the upcoming reboot (July 15) starring Melissa McCarthy, Kristen Wiig, Kate McKinnon and Leslie Jones, today is a day to revel in all things Ghostbusters — OGs Bill Murray, Dan Akroyd, Ernie Hudson and Annie Potts will join the ladies of the new class tonight on Jimmy Kimmel Live.

5. This 12-year-old girl is being dubbed the next Taylor Swift. Armed with a ukulele and one hell of a voice, Grace VanderWaal completely blew us — along with judges Simon Cowell, Heidi Klum, Howie Mandel, Mel C. and, oh, the rest of the world — away with this America’s Got Talent audition vid.

6. Quote of the day: “Take whatever it is you like about yourself — even if it’s your pinky toes — and walk around every day saying, ‘You know what? I have really great pinky toes.’ Eventually that positive feeling will seep into every part of who you are, and the people around you will see it too.” Orange Is the New Black star Uzo Aduba in an essay for Seventeen magazine. (Photo via Anthony Harvey/Getty)

Are you a fan of Selena’s new look? Let us know over @BritandCo!

Nicole Briese
Nicole is the weekend editor for Brit + Co who loves bringing you all the latest buzz. When she's not busy typing away into the wee hours, you can usually find her canoodling with her fur babies, rooting around in a bookstore, or rocking out at a concert of some sort (Guns N' Roses forever!). Check out all her latest musings and past work at nicolebjean.com.
Celebrity Breakups
Beauty News
Celebrity Breakups Celebrity Hair
More From Beauty News