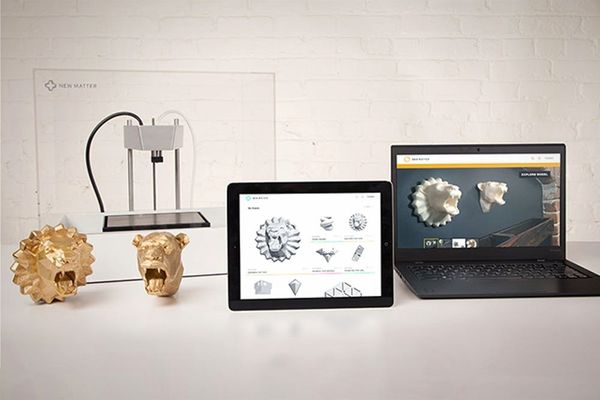 We never thought we’d type the following sentence (excuse the cliche, but…) another day, another affordable 3D printer to buy for your home. It’s true though, guys. New Matter MOD-t is an additional budget bot out there begging to buddy up next to your home computer for just a couple hundos toward its crowdfunding campaign. PLA [filament] is here to stay.

Their pitch is simple and efficient. MOD-t is easy, it’s cheap, it’s wireless and it comes with a whole online store full of cool designs for buying, customizing, sharing and (duh) printing. Plus, you can get it for a pledge of $249, even cheaper than the modestly-priced Micro we wrote about recently. It’s not that we’re fickle when it comes to technology (hello, how many techy peops still hold a soy candle for their Talkboys, I mean…) we see this more of an addition than a replacement. Think about how many types of TVs there were to choose from when you bought your first very own. The field for 3D printers is looking a little more like all of your other electronics every day.

Enclosed in a glass cube, MOD-t has a slightly more sleek and modern look than the brightly-colored Micro or even the MakerBot, but that’s not the only thing that could set it apart.

The angle that MOD-t could market harder is that the machine has a built-in shopping experience… and could help you pay for itself. Shapeways and MakerBot’s Thingiverse are already great places for printers to sell or open source designs to customize and 3D print, but MOD-t’s fleet (right now they’ve sold about 1800) will all come with their own proprietary marketplace. Some of the pledges even include credit toward New Matter’s market, ensuring that you’ll use their software and their machines to REALLY make. The company will pay you dough for your designs, which could end up meaning that your $249 pledge pays for itself thanks to your creativity.

Micro’s Kickstarter campaign ended up capping off at $3.4 million, totally crushing their teeny weeny $50,000 goal and ensuring that almost 11,000 of their 3D printers will be loose in the world by the end of the year. It may have stolen MOD-t’s thunder just a bit, but the new “printer for everyone” is more than chugging along, their Indiegogo campaign currently at almost $450,000, already surpassing its $375K goal with a month left still to go.

What do you think about MOD-t — is it the 3D printer of your dreams? What would it take for YOU to buy a 3D printer for your home? Sound off below!

Lisa Raphael
In her past professional lives, Lisa has served the masses as the Editorial Director at Brit + Co, Bieber Whisperer at J-14, Golden Girls Fan Club Prez at Lifetime and Talk Show Host Understudy to Katie Couric. Now, she's taking on the sports world at The Relish, teaching Hairography 101 in her spare time and will forever be trying to fill the hole Zayn Malik left in her heart.
3D printing
Tech
3D printing