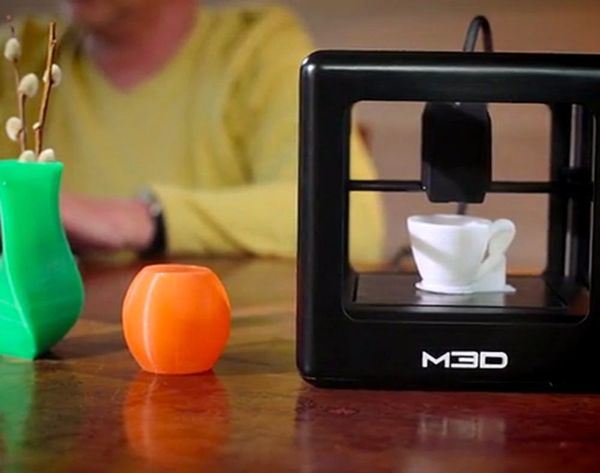 Kickstarters come in all shapes, sizes and successes. Some are little campaigns that could and some are big campaigns that cannot (really, no one wants Imogen Heap music gloves?). The latest little guy to rack up the support in an overwhelming way is Micro, a 3D printer that made it rain by passing their $50,000 goal in a whiplash-inducing 11 minutes, hitting $1 million in one day. So what makes them so special? You’re going to actually own them someday soonish, that’s what.

Micro bills itself as the “first truly consumer 3D printer” and with size, ease, cost and cute factors all on its side, we believe ‘em. And think you will too. Let’s break it down:

Micro is little: The bitty cube measures 7.3 inches per side and weighs in at 2.2 pounds. When it comes to power, it’s more efficient than its competitors, taking about a tenth as much energy to run. (Side note: the pic above is a screenshot from the video where a baker is rolling out dough, printing out a cookie cutter and then stamping the dough with it. Ah! See, we told you this was a new Want/Need in your life.)

Micro is easy to use: You plug it in and press print. Yes, it can be that easy. It auto-calibrates so you don’t have to mess with that (take it from us, that step can be a headache) and even comes with software that has a library of existing parts you can print out easy peasy. It takes the usual PLA, ABS, Nylon, plus Micro sells their own filament spools for $12 a pop.

Micro is cheap: In the world of 3D printersand in the world of home appliances, Micro’s $300 tag is pretty affordable. To compare, a MakerBot Replicator Mini will run you $1375. And, hey, a Vitamix is $380.

Micro is cute: That is all.

Really. It’s an adorable design that’s eye-catching, intuitive and will get you jazzed to print and excited to show off your creations. Which is exactly what the makers of Micro want. An emerging technology like 3D printing needs time to grow and a community to help mold and shape its future. The more printers in peoples’ homes, the closer we are to that future becoming the present.

We’re a little heartbroken that we didn’t snatch up one of the Micros at their early bird pledge prices of $199 and $249 (shoot, early birds snatch a super affordable worm sometimes) but you can still pledge $299 to receive your very own around January 2015. If you’re looking for other, affordable ways to bring 3D printing home, keep an eye out for LIX, a handheld printing pen that is about to kick off its Kickstarter next week. Something tells us it’s going to do pretty well…

Are you interested in 3D printing at home? How much would you pay to have one in your kitchen or living room?

Lisa Raphael
In her past professional lives, Lisa has served the masses as the Editorial Director at Brit + Co, Bieber Whisperer at J-14, Golden Girls Fan Club Prez at Lifetime and Talk Show Host Understudy to Katie Couric. Now, she's taking on the sports world at The Relish, teaching Hairography 101 in her spare time and will forever be trying to fill the hole Zayn Malik left in her heart.
3D printing
Tech
3D printing Kickstarter