Boy-ee! The Talkboy is Real, Will Make You Kevin McAllister in No Time 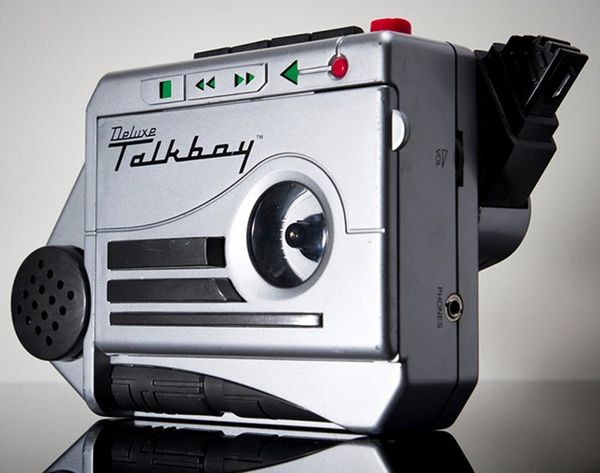 Editor’s Note: This post was originally part of our 2014 April Fools’ Prank. And because we think the ’90s are all that (and a bag of chips), we decided to leave it for all you present-day readers who may or may not still want to be Kev McA. Keep on scrolling to keep the angsty/sparkly dream alive ;)

We can’t let you loose in Duncan’s Toy Chest, but we do have some good news. Kev’s troublemaking toy in the movie can soon be yours in real life. You’re probably dialing up your friends to scream “Oh mY GaWddddd!” into the receiver right about now. That was totally our response too. Hey, who said toys are for kids?! This one has Brit + Co. written all over it. In gel pens, duh!

Since so many little ones wrote to request their own version of Kevin’s handheld recorder, (the one in the movie was actually just a prop!) Tiger Electronics decided to make a real version that looks exactly like the one in the flick. It has all the same features too.

An easy-to-move switch lets you toggle effortlessly from normal speed to slow or fast. You can record in a different speed or change it up or down after you record. Credit card? You goooott ittt. Its small size makes it totally portable — handy for on-the-go pranks or as a stand-in for your Walkman with an audio jack you can plug your headphones into. It doesn’t come with batteries or cassette tapes, but it’s about time you taped over your ex’s mixtapes anyway, don’tcha think?

We love new technology around here and think this could really spark some creativity in the kids and teens who get their hand into it. If we had these growing up, we would have recorded mega talk shows on it. Plus, we think its place in pop culture will live on well after you and your sibs have worn out the Home Alone VHS.

Rumor has it that a Talkboy just for girls will be out soon too. Um, what? Will it be, like, pink and called Talkgirl instead? Totally necessary… Not!!

What do YOU all think: Is Talkboy a toy for you too? Tell us what’s good in the chatroom below!

Lisa Raphael
In her past professional lives, Lisa has served the masses as the Editorial Director at Brit + Co, Bieber Whisperer at J-14, Golden Girls Fan Club Prez at Lifetime and Talk Show Host Understudy to Katie Couric. Now, she's taking on the sports world at The Relish, teaching Hairography 101 in her spare time and will forever be trying to fill the hole Zayn Malik left in her heart.
90s
Tech
90s toys