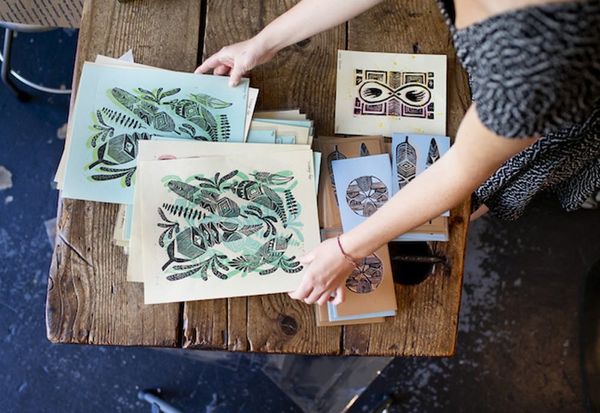 The city of San Francisco gets a lot of love heaped onto it by locals and travelers alike, and for good reason: It’s awesome, especially for creative types. But just across the bay sits a gem of a city teeming with its own local culture, and if you’re lucky enough to live there or visit, we’ve got some recommendations for exploring one of the most ethnically diverse cities in the US, which also happens to be one of the most walkable. Whether you bleed blue and gold like a true Warriors fan or you’re looking to explore a new city, we think it’s always appropriate to celebrate good times (woohoo) in good old Oaktown.

1. Waterfront Hotel: Oakland is called the “bright side of the bay” for a reason: It’s a sun-drenched bayside town with character to spare. One of the best places to stay on the waterfront, this cute, nautical-themed hotel in Jack London Square offers easy access to the local marketplace and farmer’s market, plus complimentary wine and cheese hours on weekdays and a free shuttle into downtown Oakland.

2. Washington Inn: For a cozy B&B feel in the heart of “Old Oakland” (aka downtown), this inn — built in 1913 and formerly a bar and a bank — has been given an official nod from the New York Times travel section, so you know it’s worth curling up in for a night or two. It’s a quick stroll from the Oakland Convention Center, Lake Merritt and a huge public library, so you can enjoy the conference, take in some nature and feed your brain all in one afternoon walk. (via The Washington Inn)

3. Impact Hub Oakland: If you need to get a little work done while you’re in Oakland, or just want to connect with its community of innovators and change-makers, pop into the Oakland outpost of the global coworking community known as Impact Hub. Open to Impact Hub members and attendees of special events, another way to enjoy this creative space is to become an OMI Gallery member for $15 per month, which gives you access to one day of coworking, a weekly Thursday coffee hour and Friday potluck meal, plus discounts to maker events and an inside scoop on the gallery’s calendar.

WHERE TO EAT & DRINK

4. Hopscotch: The love just keeps pouring in for this San Pablo Avenue eatery. The San Francisco Chronicle listed it among the Bay area’s top 100 restaurants in 2013 and 2014, Food + Wine calls it one of America’s best diners, and it’s got a recommendation in the 2015 Michelin Guide. This upscale diner dishes out everything from salads, snacks and sides to oysters, pork chops, seasonal fish and its famous big bucket o’ chicken. Its cocktail menu is nothing to sneeze at either.

5. Chop Bar: Named after a West African term for a roadside bar or restaurant that serves as a gathering place for the community, Chop Bar is a wildly popular spot near Jack London Square. Serving up meat-heavy entrees and an extensive signature cocktail menu (hello, afternoon micheladas!), it feeds savory comfort foods to the hungry Oakland masses seven days a week, plus an occasional pig roast or two.

6. Room 389: Start your day in Oakland with a fresh croissant and French press coffee at this funky local cafe, and then end it with your drink of choice as a DJ spins the night away at the very same spot, transforming it into a dark ‘n cozy cocktail bar. Our pick: a greyhound made to order with fresh-squeezed grapefruit. Yes, please.

7. The Grease Diner: What started off as a gallery and storefront on San Pablo Street in 2013 has since expanded into a screen-printing studio where you can take classes and shop one of the city’s best collections of locally made goods, from clothes and stationery to home goods and gifts. It’s a DIY enthusiast’s paradise with a rebel’s attitude, and its aesthetic is as celebratory of independence and artistic expression as its owners, Laurie and Jon Jon Cassagnol. Bonus: Jon Jon was a Bro + Co. (via @thegreasediner)

8. Ali Golden: This San Francisco-based designer nails the no-fuss, no-muss modern urban uniform, with clean lines, versatile pieces and keen attention paid to draping and structure. If you love the look of Madewell but want to support a local maker in the Bay area, look no further than Golden’s Oakland shop, or any of her several dozen stockists both in brick-and-mortar locations around the US and online.

9. Marisa Mason: This Santa Barbara native began designing jewelry with her parents’ collection of Navajo, Zuni and Mexican jewelry scraps, and got into leatherwork thanks to a deerhide her grandmother gave her. Now based in Oakland, her designs have a rough-and-tumble, beach-inspired boho aesthetic, and everything is handmade. While in Oakland, you can find her gorgeous, earthy pieces at Oak Common on Grand Avenue and Hawthorn on College Avenue.

10. GDS Cloth Goods: If you’re looking for a classic, durable apron to wear during your everyday baking or making, the US and Japanese-made selvedge denim aprons from GDS Cloth Goods are an excellent choice. Crafted with care using waste-reducing pattern-making and cutting methods, these conscientiously made pieces are built to last, and guess what? Their pockets are HUGE. (via @gdsclothgoods)

11. Urban Indigo: Urban Indigo began as a ceramics studio in San Francisco, but has since evolved into a fun boutique in Oakland’s Grand Lake neighborhood. It’s filled with sundry crafts and gifts for adults and kids of all ages. It’s especially great for snapping up mementos for friends back home, and you can find everything from jewelry and paper crafts to home decor and other unique keepsakes. (via @urbanindigo)

What are your favorite maker spots in Oakland? Spill in the comments below!

Amy Lynch
Amy is a freelance writer and editor, telling the stories of progressive people and projects that move the world forward. Her work has appeared on The Hairpin, Refinery29, Citygram and more, and she's developed content for the likes of Alternative Apparel, Milkshake and Silvercar. She lives, works and plays with her fiancé and their dog, Bogey, in the weird, wild heart of Austin, Texas.
Shopping
Home News
Shopping
More From Home News