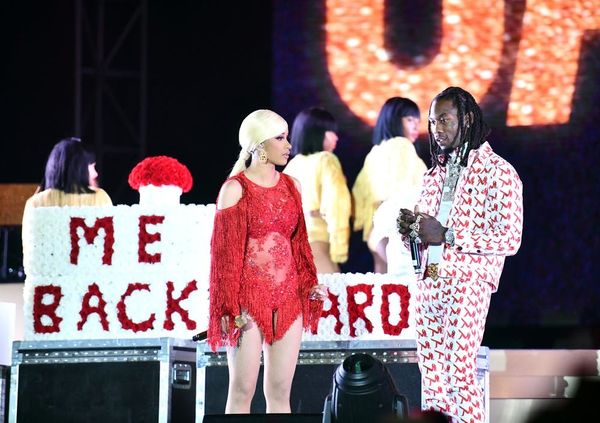 Offset will apparently stop at nothing in his attempts to reconcile with Cardi B. On Saturday, December 15, the rapper made an ill-advised decision to crash Cardi’s set at Rolling Loud to ask for her forgiveness. It did not go well.

Cardi was in the middle of her performance — notably, the first by a female headliner in Rolling Loud’s short history — when some guys wheeled on a display of flowers spelling out, “Take me back, Cardi,” and Offset appeared onstage to apologize “in front of the world.” As seen in video captured by fans and posted to social media, she was less than thrilled about the gesture and addressed him at length off-mic. Eventually, after several seconds of tense discussion, he walked offstage and she continued her set.

Afterward, he tried to explain himself on Twitter. “All of my wrongs have been made public, I figure it’s only right that my apologies are made public too,” he wrote on Sunday.

But Cardi’s fans were not having it. Some criticized him for interrupting her at work and making her performance all about him, while others accused him of trying to manipulate or guilt her into taking him back. She responded to the outrage after the show, posting a video in which she thanked fans for having her back but also asked them not to “bash” Offset, with whom she shares daughter Kulture.

“Guys, I just want to say thank you so much for everybody that been supporting me, that been loving me, and that feel like they need to defend me,” she began, before asking fans to give her and her ex some time and space. “Violating my baby father is not gonna make me feel any better because at the end of the day, that’s still family. Unfortunately, we going through things, and it’s not private. It became public. And I just want things to die down.”

“I just need time so we can see eye-to-eye,” she continued. “I can’t predict the future. I don’t know. But the whole coming after my baby father bullsh-t, that doesn’t make me feel any better. And I just want to say thank you, everybody. Respect my wishes. I love you so much.”

She went on to reference an incident with Pete Davidson, who alarmed fans and friends alike earlier on Saturday, when, after facing social media attacks from Ariana Grande’s fans, he posted a note saying he didn’t “want to be on this earth” anymore. “Just earlier, you just saw how Pete Davidson was talking about how he don’t even want to be on this earth because mad people be coming at him every single day,” Cardi said in her video. “I wouldn’t want my baby father to have that feeling because of millions of people be bashing him every day. That’s a nasty feeling, and I wouldn’t want that.”

Cardi and Offset married last year and welcomed daughter Kulture in July. She announced their split earlier this month, telling her Instagram followers, “Things just haven’t been working out between us for a long time. It’s nobody’s fault. I guess we grew out of love, but we are not together anymore.”