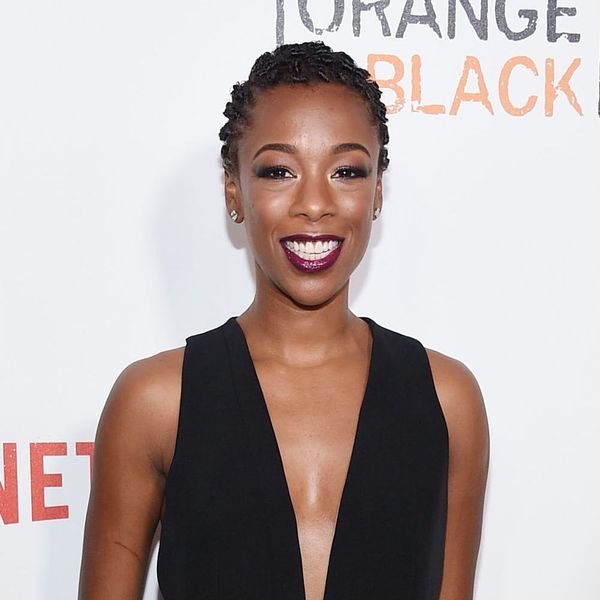 It’s hard to imaging being any more excited for the new season of Orange Is the New Black, just like it’s hard to imagine loving the Litchfield ladies more than we already do. But one star may have just upped her sweetness factor that much more with her super adorable engagement announcement. Get ready for a flash of love, as Samira Wiley just got engaged to OITNB writer, Lauren Morelli.

29-year-old Samira, who played Poussey Washington, posted a pic to Twitter of herself with the sweetest smile showing off her simple yet lovely engagement ring, with Lauren right behind her looking just as happy. She also added the adorable caption, “I’ll do anything with this one…”

Though Lauren was actually married to fellow TV writer Steve Basilone when she began working on OITNB, in 2014 she wrote for Mic about realizing that she was not only gay, but also in love with Samira. Lauren officially divorced her husband later that year.

With the stars of OITNB all heading back to set to start filming the next season (without Samira we assume, because *tears*), we wonder if Samira and Lauren will have time to plan a big wedding or if they’ll opt for a super romantic small ceremony.

Will you miss Poussey in the next season of OITNB? Tweet us @BritandCo!

Desiree O
Desirée O is a ‘Professional Bohemian’ who loves anything and everything related to the arts, entertainment, and pop culture. She ADORES being a ‘Newsy’ for Brit + Co, covering all of the latest tidbits of awesomeness that you want to read about. When she’s not writing, she’s either making messy art, going on long adventurous walks with her camera, or poking around over at bohemianizm (http://www.bohemianizm.com/). You can find out about Desirée O and her work at http://DesireeO.com/ or follow her on Twitter @DesireeO.
Celebrity Wedding
TV
Celebrity Wedding
More From TV