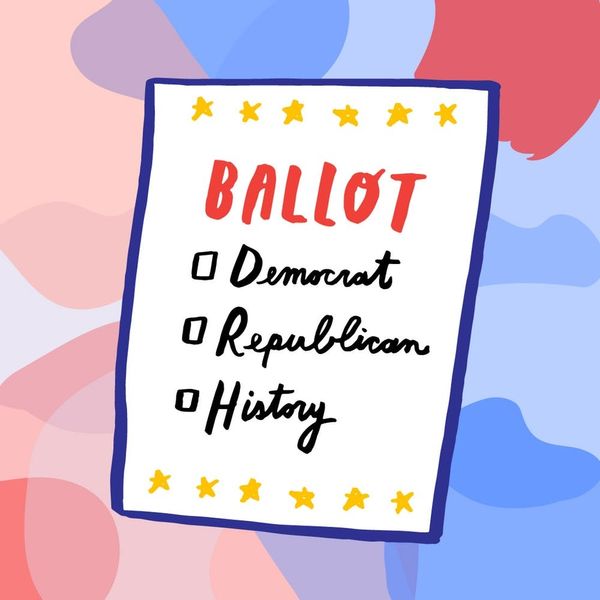 It’s been an exhausting election. If it’s wine o’clock where you are, girl, you have EARNED it. We all have… and soon, mercifully, it’ll be over. *EMOJI PRAYER HANDS*

No matter which candidate you’re voting for, or where you fall on the political spectrum, this has been a powerful election for many women across the country on a purely symbolic level. And the moms of Brit + Co are hardly exempt from the overwhelming sense of optimism for what the future may hold for women who wish to enter public service.

We asked our moms, grandmas and stepmoms what they think about the possibility of a woman in the White House after today’s ballots are counted. Here’s what they had to say:

“I’m in a heightened state of anticipation at the probability of our country electing its first female president. As a proud mother of two accomplished millennial daughters who I’ve raised to be strong and independent women, I’m thankful to be alive to witness this historic moment with them… in the words of Dame Margaret Thatcher: “If you want something said, ask a man; if you want something done, ask a woman.” – Patty Elkus, mom of Brand Partnerships Planner Kristina Elkus

“Hillary Clinton, first woman president. WOW!! This is an exciting day and one I thought I may never see. This should tell each one of us that we can accomplish anything we set our mind to. No stopping us!! – Sarita Griffis, mom of Channel Marketing Associate Sean Griffis.

“This campaign reminded me of how far women have come and how far we have to go. HRC is certainly flawed, as are ALL CANDIDATES, but she had to prove herself far beyond any male, flawed candidate. And she did it! I’m humbled to have witnessed such change in our executive office. My hope is that my grandchildren and great grandchildren will continue to see unconventional candidates, and see them as a normal component of our political process.” – Anita Harbor, mom of Beauty Editor Beth Wischnia.

“It would be remarkable! A woman would be very good if they have the experience and knowledge.” – Grandma of DIY Editor Kelly Bryden.

“Finally, the US may follow in the footsteps of many other countries in the world to elect a female leader. It’s a beautiful hour for womankind, this moment of female leadership.” – Marina Castillo-Korducki, mom of Senior News Editor Kelli Korducki.

“I feel that the person that is the most qualified for the biggest job in the country happens to be a woman in this election. Hillary is change.” – Lorrie Finkel, mom of Offices and Operations Manager Ashley Reed.

“I am so proud to be voting for a woman for president this year. Women have worked so hard to be seen as equal in all aspects, from the military to the workplace to the home. To be represented by such an accomplished woman such as Hillary Clinton is just amazing! I am proud to be an American woman!” – Sheree Sensell, mom of Product Designer Emelyn Baker.

“The movement of women has always been to improve the quality of life for our families. We have moved up and through so many sectors of life… it was only a matter of time to be in the White House. You can add in there that Trump is a clown!” – LaCina Thomas, stepmom of Community Manager Natasha Thomas.

“My feelings of the possibility of a woman finally getting in the White House as President of the United States is EXCITEMENT!!! Almost the same EXCITEMENT as when we voted in a Black man, but this time it’s a bit different. Being a woman working in a male-dominated field for the last 11 years, having a woman in the White House gives me hope that one day I will earn the same amount of money and respect as my male coworkers. Having a woman in control of the most powerful nation in the world will give hope to other women around the globe and show other countries that women are human just like men, and it’s time to show that we are not just here to serve men and bear children. We are more than that.” – Eyvonne McDonald, stepmom emeritus of Community Manager Natasha Thomas.

“My mother was born in 1908 before women had the right to vote, so for the women in my family to live to see a woman elected to the highest office of the land is a dream come true.” – Celia Bell, grandmother of VP Marketing Cecelia Cox.

What does YOUR mom have to say about the possibility of a woman in the White House? Tell us @BritandCo!