Over 36 Hours, Selma Blair Has Emerged as a Powerful Champion for Disability Visibility 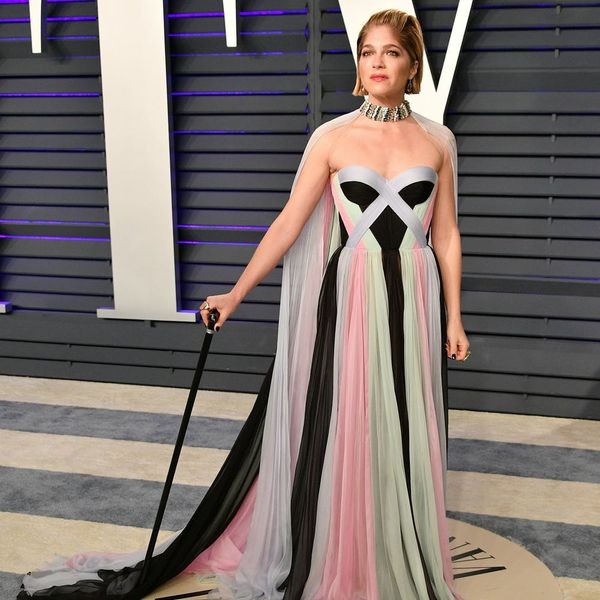 When actress Selma Blair arrived at the Vanity Fair Oscars afterparty on Sunday, February 24, resplendent in a flowing gown and using a customized cane, it marked her first public appearance since she announced that she had been diagnosed with multiple sclerosis back in October.

After the 46-year-old’s appearance, many applauded her decision to share her life with MS — an incurable, often debilitating disease that affects the central nervous system and, as in Blair’s case, can affect a person’s ability to speak — and make people with disabilities more visible on a global stage. Blair took advantage of the positive reception by taking her first interview since going public with the disorder.

In an interview on Good Morning America on Tuesday, February 26, the actress told Robin Roberts that she was in the middle of an MS flare-up and scared to even speak on camera due to the disease’s effects on her vocal cords. But Blair said that her neurologist encouraged her to show people what her symptoms look like.

“I’m very happy to see you and just to be able to just put out what being in the middle of an aggressive form of multiple sclerosis is like,” she told Roberts during their sit-down interview. “It’s interesting to be able to say, ‘This is what my particular case looks like right now.'”

According to the Pew Research Center, more than 20 million Americans live with a disability involving mobility issues, and 14 million say they have trouble doing chores and errands alone due to their disabilities. People with disabilities are also more likely to live in poverty, to be unable to find or keep a job, and to have trouble using technology like mobile phones. In fact, Pew says that nearly a quarter of all Americans with a disability don’t use the internet at all.

But beyond the day-to-day challenges of people with disabilities, there’s the fact that they aren’t accurately depicted or understood in media. According to GLAAD’s annual representation in media report for 2017, only 1.7 percent of characters on television had visible disabilities, even though nearly 13 percent of Americans live with one. The Attitude Foundation further points out that of these characters with disabilities, most are shown in wheelchairs or with sunglasses and white canes — in other words, they’re people with clearly visible, archetypal disabilities.

And people with invisible disabilities — things like attention deficit disorder, obsessive compulsive disorder, brain disorders, and autism — are even less represented in the media landscape.

Which is why Blair’s decision to show up to the Vanity Fair Oscars afterparty, and on Good Morning America, is groundbreaking and a big deal.

“I was a little scared of talking,” Blair admitted to Roberts. People mid-MS flare-up usually don’t have the energy to speak, Blair explained, let alone host a television crew. But, the actress joked, she does, because, “I love a camera.”

Kat Armstrong
Kat has been a writer, social media maven and mom for longer than she's willing to admit. She's also spent time in front of and behind the camera, interviewing celebs, politicians and acting as a producer for fashion and artistic photography shoots. When she isn't writing for various orgs and publications, she's hanging with her kids, husband and French Bulldog, Peter, in Toronto, Canada.
Inclusivity
Diversity
Inclusivity Oscars Womens Health
More From Diversity