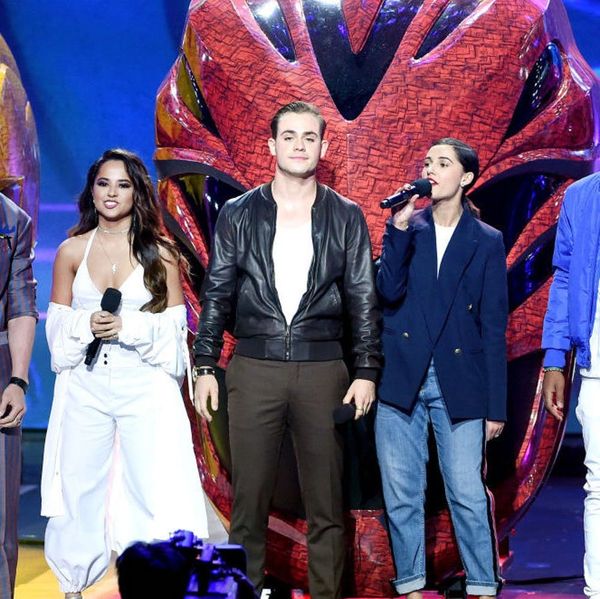 When the reboot of the popular ’90s kids show Power Rangers comes out this week, it’s promising to be a whole new kind of superhero franchise in more ways than one. First, we learned that Billy the Blue Ranger, played by RJ Cyler, would be on the Autism spectrum, and now we’ve learned that Trini the Yellow Ranger will be the first openly lesbian superhero.

Trini’s sexual identity is introduced during a scene when the character (played by Becky G) reveals that her presumed boyfriend troubles might actually be girlfriend troubles.

“For Trini, really she’s questioning a lot about who she is,” director Dean Israelite told The Hollywood Reporter. “She hasn’t fully figured it out yet. I think what’s great about that scene and what that scene propels for the rest of the movie is, ‘That’s okay.’ The movie is saying, ‘That’s okay,’ and all of the kids have to own who they are and find their tribe.”

In the original series, the actor who played the Blue Ranger, David Yost, was openly gay, but ended up leaving the series after being harassed for his sexual orientation. “They really stepped up to the plate,” Yost told The Hollywood Reporter of the new film. “I think so many people in the LGBTQI community are going to be excited to see that representation.”

He’s not the only one who is praising Trini’s coming out:

ITS OFFICIAL NOW: TRINI AKA THE YELLOW POWER RANGER IS GAY ! pic.twitter.com/tgLDX63wXV

TRINI AKA YELLOW POWER RANGER IS GAY RT AND SAY IT LOUDER FOR THE PEOPLE IN THE BACK pic.twitter.com/SBLCTg9jiX

Are you getting psyched for the new Power Rangers? Tweet us @BritandCo!

Amanda Buckiewicz
Amanda Buckiewicz is a TV producer and writer based out of Toronto. Her claim to fame is producing live interviews with astronauts on the International Space Station, and getting beat up by a bunch of aerial Asian Carp. She spends a lot of time worrying about climate change, shark conservation, and where to find the best moisturizer for her combination skin.
Movies
More From Movies