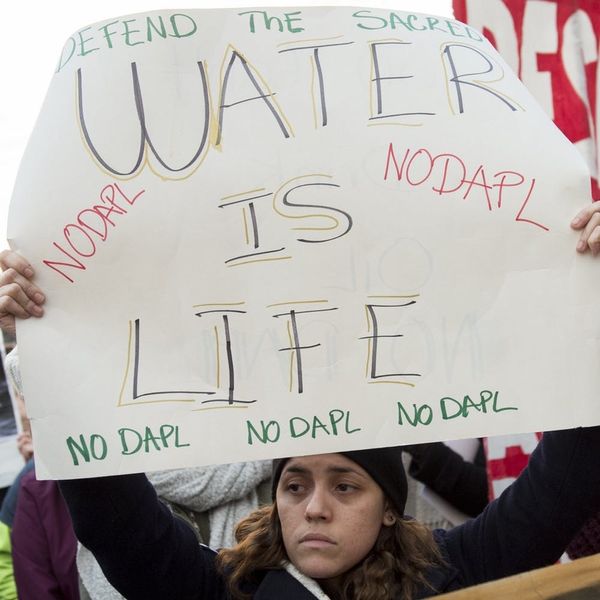 Yesterday, we brought you news that one of President Trump’s first acts in office would have some MAJOR effects on women’s rights, not only in the US, but the world over. Today, he continued to exercise his new political powers, signing several memorandums that could surely have a lasting implication on human rights in the more general sense of the word.

After a grueling fight spanning more than eight months (that saw actress Shailene Woodley arrested) over a proposed Dakota Access Pipeline (which would span 1,172 miles as an alternative route for oil transportation, albeit at the risk of water contamination for indigenous people in the area), a victory came in December, when the project came to a screeching halt after being denied permit papers by the US Army Corp of Engineers.

Now, thanks to two of five orders that President Trump signed into action today, not only will the Dakota Access Pipeline be a go, with a memorandum for the US Army Corps of Engineers to “review and approve [the project] in an expedited manner,” the similarly controversial Keystone XL Pipeline, which would stretch 1,179 miles between Alberta, Canda’s oil sands and Steele City, Nebraska has been extended an invitation of resubmission, with further instruction for the Secretary of State to make a decision on the matter within 60 days.

As with the Dakota Access pipeline, the Keystone XL pipeline is largely opposed by environmentalists, including the Environmental Protection Agency, who had previously advised former President Barack Obama not to issue the permit due to risks to local communities, including potential oil spillage and atmosphere warming.

President Trump has previously estimated that the Keystone XL pipeline alone would create 28,000 jobs, (no doubt, a large motivator for his decisions), with a separate memorandum to see each of these projects completed with all American steel.

Vermont senator and former Presidential candidate Bernie Sanders, for one, was not impressed, saying that he was putting the “short-term profits of the fuel industry ahead of our planet.”

Dakota pipeline protestors have already taken to the streets, with organizers promising legal action. Sounds like this one’s not going over without (another) fight…

What do you make of Trump’s office’s actions so far? Chat with us @BritandCo.