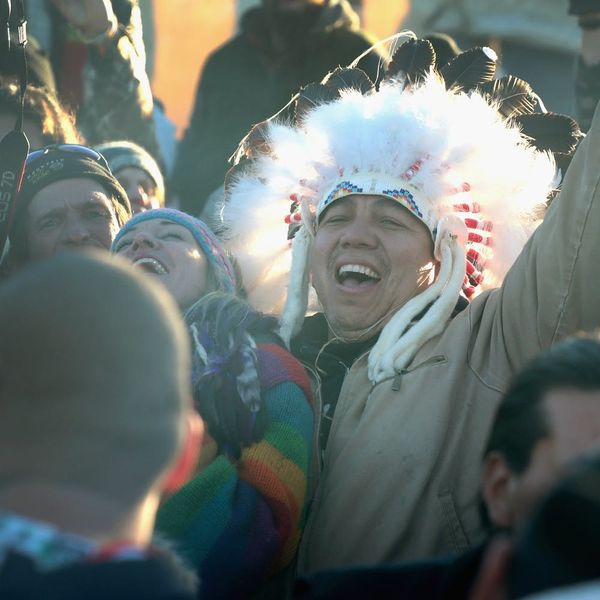 If ever there was a doubt that you really and truly can make your voice heard through peaceful protest (like the upcoming Women’s March on Washington), the protestors raising theirs against the Dakota Access Pipeline (including actress Shailene Woodley, who was arrested on Facebook live over the movement) just managed to erase them all in one fell swoop.

Since early April, thousands have begun to gather in North Dakota, where a massive pipeline project, dubbed the Dakota Access Pipeline, was set to be laid. Spanning a distance of 1,172 miles, the pipeline aimed to provide a more direct route for the transportation of oil from areas in North Dakota to Pakota, Illinois, in order to reach “more refined markets.”

Unfortunately, the project’s route would have also potentially contaminated the water of those in its path. First proposed to run through Bismarck, North Dakota, citizens of the area voiced their concern to have the pipeline’s path moved. It’s new, most recent route, however, would have affected the Native American Standing Rock Sioux tribe much in the same manner.

The tribe rose up in protest, and it wasn’t long before their indigenous brothers and sisters had jumped on-board the movement, which quickly became a historic gathering of Indigenous Nations. And they weren’t alone. Thousands of other, non-Native peoples also joined in the movement, now known as #NoDAPL, both in-person and on social media.

Now, it appears that their collective voices have been heard. The Army Corps of Engineers, whose permit was required for the project to move forward, has denied the pipeline its necessary paperwork.

The Army’s assistant secretary for civil works said in a statement that it was the group’s discussions with tribal officials that ultimately influenced their decision.

“The best way to complete that work responsibly and expeditiously is to explore alternate routes for that pipeline crossing,” she said.

She also noted that the organization intended to issue an environmental impact statement.

While there are still concerns that the decision won’t be final following President-elect Donald Trump’s inauguration into office (he has historically favored completion of the project and is rumored to own stock in the company aiming to complete it, although the details there are quite unclear), the halting of it is, for now, still a huge victory in and of itself.

As the National Congress of American Indians President Brian Cladoosby said in a statement, “This isn’t over, but it’s enormously good news. All tribal peoples have prayed for a peaceful solution from the beginning, and this puts us back on track.”

Here’s to the power of the people!

Have you ever taken part in a protest? Share with us @BritandCo.

Nicole Briese
Nicole is the weekend editor for Brit + Co who loves bringing you all the latest buzz. When she's not busy typing away into the wee hours, you can usually find her canoodling with her fur babies, rooting around in a bookstore, or rocking out at a concert of some sort (Guns N' Roses forever!). Check out all her latest musings and past work at nicolebjean.com.
Controversy
Politics
Controversy
More From Politics