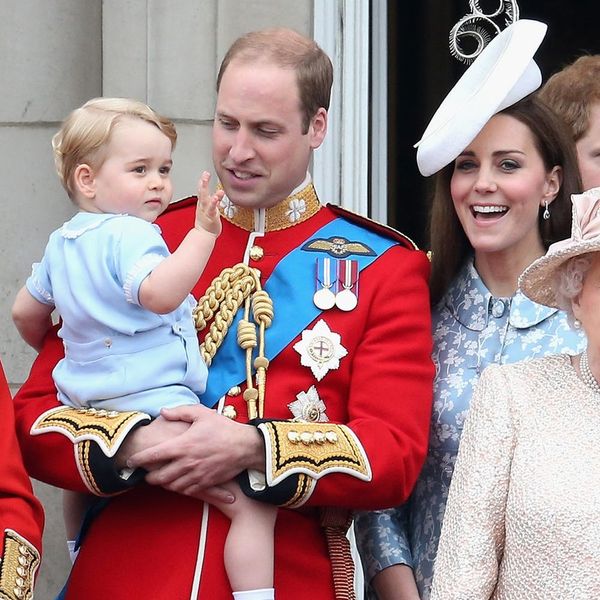 Your last few days may have been full of mimosas and picture perfect picnics in the park, but we’re guessing someone had an even better weekend than you – and that someone isn’t even two years old. This past weekend Prince George made the world simultaneously swoon with not one, but a whole bunch of adorable photos from various family outings.

The excessive cuteness all started during Queen Elizabeth II’s annual birthday ceremony, Trooping the Colour. While Will and Kate rode in the parade, Prince George stole the show watching from above and making hilarious faces out the window with his nanny. Somebody needs to get this kid a photobooth ASAP.

After the parade, his parents joined him for his debut appearance on Buckingham Palace’s balcony along with the rest of the family. Aside from his already perfect royal wave, what really caught our eye was that baby blue jumpsuit. If it looks familiar, that probably because Prince William wore the exact same one when he was first carried out onto the balcony 31 years ago.

After Saturday’s super swanky events, the family decided to keep things low-key while hanging out at a charity polo match Will and Harry were participating in. While the brothers played, Kate and George had some fun on the side lines. Kate swapped her fascinator and dress for jeans and a t-shirt and Prince George sported a blue cardigan over a white button-down.

Bonus: Let’s talk about these adorable pics with Uncle Harry, shall we?

What is your favorite Prince George pic? Share with us in the comments below.

Cortney Clift
Cortney is the senior writer and special projects editor at Brit + Co. She typically covers topics related to women's issues, politics, and lifestyle. When she's not buried behind her computer you'll find her exploring New York City or planning her next big adventure.
Kate Middleton
Party
Kate Middleton