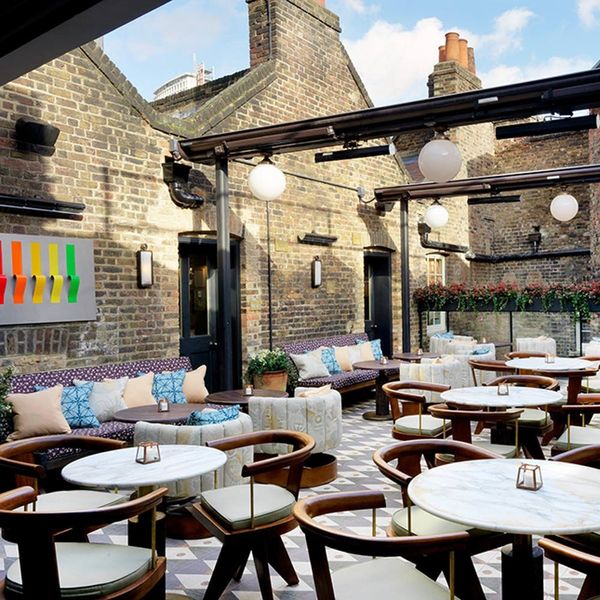 We’ve been watching Meghan Markle’s fairy-tale romance with Prince Harry unfold since the very beginning, and we couldn’t be more excited about the upcoming royal wedding on May 19. With more details of the ceremony announced every day — from the wedding invitation design to the flavor of their wedding cake — we’re seriously considering booking a trip to London just for this historic event. Don’t fret if you haven’t received your official invite to the wedding yet: There are plenty of ways to get into the royal spirit. Here are 14 places in the UK that are famously associated with the Prince and Markle — from the restaurant where they had their first blind date to the famous castle where the princess-to-be first met the queen. Pro Tip: If you do head across the pond, the London Pass gives visitors access to 80 different attractions and tours, allowing you hit as many sights as cost-effectively as possible.

1. Soho House, London, England: The original Soho House was founded in London in 1995, and today the company has grown into a global empire of private members’ clubs with restaurants, cinemas, workspaces, spas, and hotels all across Europe and North America. The royal family has been spotted at these elite hotspots for years — including Prince Harry and Markle, who were photographed leaving the Soho House on Dean Street in February 2017. If you’re visiting London near the time of the big wedding, take a stroll by the Soho House on Dean Street or check out the fabulous rooftop on 40 Greek Street… You’ll never know who you’ll spot sharing a crudité. (Photo via Soho House on 40 Greek Street)

2. Dean Street Townhouse, London, England: This luxury hotel and restaurant combo has recently cemented its place in royal history. According to several sources, the couple’s first official date occurred during a cozy evening at Dean Street Townhouse, a chic eatery within the popular Soho House family. Not all blind dates can be winners, but this one sure was!

3. Windsor Castle, Windsor, England: Are you ready to witness an IRL fairy tale? The royal wedding ceremony will start at noon local time on May 19 at St. George’s Chapel, a church within the grounds of Windsor Castle. For £21, you can explore nearly all of the castle, including its exquisite chapel, and experience a world-class multimedia tour (although the grounds will be closed May 18 and 19 to prepare for the royal hubbub). Keep in mind that if you’d like to attend church at St. George’s Chapel, you won’t need a ticket, as Sunday church services are free to all. (Photo via Dominic Lipinski/WPA Pool/Getty Images)

4. Kensington Palace and Gardens, London, England: If you want to see the place where Prince Harry famously proposed to Markle during a cozy night in (they were literally roasting chicken when he popped the question), check out Prince Harry’s residence in Nottingham Cottage, which is nestled within the grounds of Kensington Palace. While Nottingham Cottage itself is obviously not open for tourists (even princes need their privacy), you can check out the fabulous palace and surrounding gardens with a £14 ticket. (Photo by DeAgostini/Getty Images)

5. Battersea Park, London, England: Back when the couple’s relationship was still hush-hush, the adorable couple was spotted shopping for a Christmas tree at Battersea Park. While you’ll have a while to wait until the pop-up shop where the couple got their £65 Nordmann Fir reopens for winter, you can still wander this gorgeous park in hopes of spotting a member of the royal family on a leisurely jaunt. (Photo via Alex Segre/Getty)

6. King’s Road, London, England: Since she’s known as the most fashionable princess-to-be in the world, we’re not surprised that Markle enjoys shopping on the popular high-end King’s Road in west London. Markle has been spotted on several occasions darting in and out of designer boutiques like Prada and Sarah Chapman. While we may not be able to afford the hefty price tags on some of Markle’s fashionable King’s Road purchases, we’ll still have a great time window-shopping! (Photo via Alex Segre/Getty)

7. The Gielgud Theater, London, England: During the very early stages of their relationship, Prince Harry and Markle were photographed last year enjoying a lovely performance of The Curious Incident of the Dog in the Nighttime at the Gielgud Theater. While the run for this show has now ended, you can still attend another production at this famous theater, as performances of The Ferryman are running daily until the royal wedding on May 19. (Photo via Getty)

8. The Sands End, London, England: Are you ready to devour some local British grub? This charming restaurant is owned by Prince Harry’s good friend Mark Dyer, and the royal prince took his then-girlfriend there in December 2016 for a well-documented winter meal. Known for its charm and hearty cuisine, The Sands End brings a slice of the countryside to southwest London with seasonal food and ale that make a welcome treat for both locals and tourists.

9. Balmoral Castle, Aberdeenshire, Scotland: Prince Harry wanted to make sure that the first time his then-girlfriend met his grandmother was extra special — so it’s no surprise that the young royal took Markle to visit the Queen at her summer residence at Balmoral Castle. Purchased for Queen Victoria by Prince Albert in 1852, Balmoral has been the Scottish home of the royal family for well over a century, and both Harry and William have spent many Christmases in the elegant castle. Good news if you’re visiting Scotland as a part of your royal tour: Balmoral Castle is open to the public during the summertime. This year the castle will be open to the public from March 30 to July 31. (Photo via Robert Plattner/Oneworld Picture/UIG/ Getty Images)

“If it ain’t broke” via @thedavidjaypaw

10. Bocca di Lupo, London, England: Who says you can’t get an authentic taste of Italy in the United Kingdom? Opened nearly a decade ago, Bocca di Lupo is a regional Italian restaurant that’s located just minutes away from Trafalgar Square. A rumored favorite restaurant of Markle’s, this highly-rated eatery is one place where we’re definitely excited to indulge in a slice of ‘za.

11. The Berkeley Hotel, London, England: If you want to do London like a royal, you have to stop for an afternoon tea service. Located in the heart of Knightsbridge near the iconic Hyde Park, the fashionable Berkeley Hotel is launching a Royal Wedding Pret-a-Portea in celebration of Prince Harry and Markle’s upcoming marriage, including a playful afternoon tea experience that starts at £52 per person. While we haven’t found any evidence that the couple has been to this location as a couple yet, sources have predicted that this swanky hotel will host some of their famous wedding guests come May.

12. Bunga Bunga, London, England: Long known as a party hotspot at its London locations, Bunga Bunga is split up into three levels — level one is a bar and pizzeria, level two is a club and private dining room, and level three is a martini prosecco beach bar. You may not assume that this would be a hangout fit for royalty, but it’s actually well-documented that the royal family (including Prince William, Kate Middleton, and Prince Harry) have visited before. You may want to get there sooner rather than later — many sources say that this trendy club is one of the top contenders for Prince Harry’s bachelor party. (Photo via Bunga Bunga)

13. The Brown Cow, London, England: Another restaurant owned by Prince Harry’s friend Mark Dyer, The Brown Cow is a gastropub on Fulham Road that often entertains the royal family. The British prince has been known to show up here for momentous occasions, celebrating both the birth of his nephew Prince George here as well as marking his return from official duty in Afghanistan. Perhaps his impending wedding will warrant another visit? We sure hope so!

14. The Cross Keys, London, England: In case you hadn’t already assumed that Prince Harry frequents all of Mark Dyer’s fabulous establishments, here’s another one to add to the list: The Cross Keys is yet another one of Dyer’s chic gastropubs where the royals dine. Prince Harry celebrated his 31st birthday at this locale (also famous as Chelsea’s oldest pub) with friends and family a few years ago.

How are you prepping for the royal wedding this May? Tweet us your plans @BritandCo.

Ashley Macey
Ashley Macey is a lifestyle freelance writer who loves all things fitness, wellness, and creativity. When she's not exploring her home in the Pacific Northwest with her dog Max, you'll probably find her curled up with a good book and some hot tea. Follow her daily jaunts on Twitter.
Celebrity Wedding
Travel
Celebrity Wedding Creativity Royal Family Royal Wedding Vacation Weddings
More From Travel