Shop All the Labels Meghan Markle Has Worn So Far 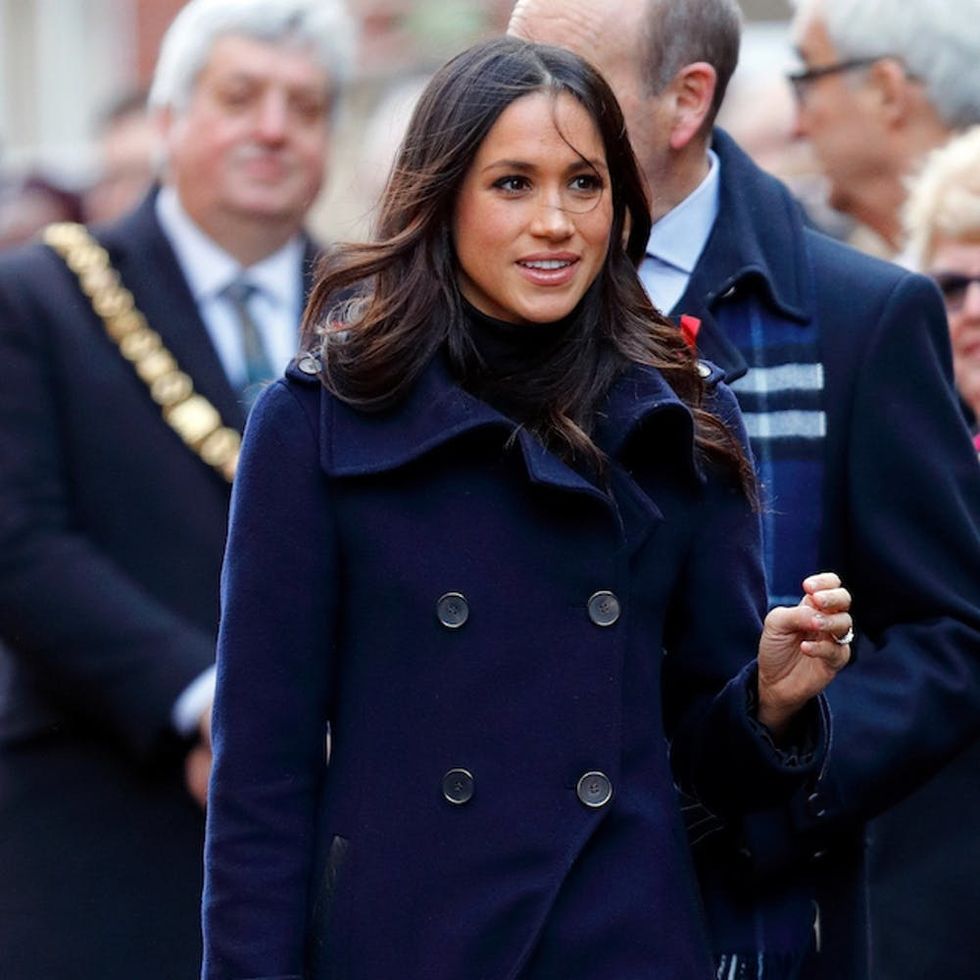 Meghan Markle has only been engaged to Prince Harry for around a month, but the Meghan Markle Effect is already in full swing. Royal watchers (and fashion watchers) everywhere are clamoring to know every brand she wears — and where to shop them. And the future princess bride (okay, not exactly princess, we know) is proving she’s up to the challenge. From her gorgeous tailored coats and dresses to her laid-back jeans looks, Markle has all of us at attention. Ahead, all the labels she’s stepped out in so far, and where to snag a little bit of that monarchy magic for yourself.

For her first appearance since announcing her engagement to the Prince, Markle marked World AIDS Day in a full-length coat from go-to outerwear brand, Mackage. She paired the sleek stunner with OTK boots from Kurt Geiger and a super polished tote from Strathberry. (Photo via Max Mumby/Indigo/Getty)

1.Mackage Elodie ($795): Elegant with a bit of an edge, this military-inspired topper is totally fit for a soon-to-be royal. Chic but not stuffy makes for simply brilliant.

2.KG Kurt Geiger Violet ($295): Over-the-knee boots may seem like a saucy choice for a prince’s future wife but under a maxi coat, they strike that just-right balance. There are only a handful of sizes left in this style, undoubtedly a result of Markle’s seal of approval.

3.Strathberry Midi Tote ($625): Can you say It Bag? This color-blocked beauty is currently sold out but will be restocked soon, so add your name to the notification list ASAP to get your hands on one when it arrives.

Her first official appearance as the future Mrs. included this crisp coat from Line, an emerald sheath from P.A.R.O.S.H., and ever-so-sexy heels by Aquazurra. It was the outfit choice heard round the world. The Markle Effect on sales swiftly followed. (Photo via Samir Hussein/Samir Hussein/WireImage)

4.Line Marion Cardigan ($275): Markle’s engagement coat may not be available online, but you can surely snag a little bit of wearable majesty with this creamy textured cardi. After all, knits are what this brand is known for. So snuggly!

5.P.A.R.O.S.H The Meghan ($511): As evidenced by its name, this feminine frock garnered a ton of attention once Markle rocked it to debut her new betrothed status. There are still a few sizes left, so scoop yours up STAT to get in on the aristocratic action.

Sparking rumors of an impending engagement, Meghan accompanied Harry to the Invictus games and did her best “I’m totally unfazed by all of this,” as evidenced by her ultra chill Misha Nonoo button-down and distressed Mother Denim combo. A potential royal in ripped jeans? The future is now. (Photo via Karwai Tang/WireImage)

8.Mother Denim Looker Ankle Fray ($228): With a little bit of distressing but not too much, these make for the ideal jean for weekends. Or, you know, attending a public event with a member of the monarchy.

At the opening ceremony for the Invictus Games, Markle mastered the monochromatic look in this burgundy dress from Aritzia’s in-house brand, Wilfred, along with another trusty Mackage topper. This girl knows what works for her. (Photo via Karwai Tang/WireImage)

9.Mackage Baya Leather Jacket ($690): Sizes are limited by now, but if you’re one of the lucky few, you could potentially cop the whole Invictus look, including this Bordeaux beauty. Buckingham Palace, here you come!

10.Wilfred Beaune Dress ($185): Yes, this pretty pleated frock is still very much in-stock, so you can snag it to wear on its own or with the aforementioned moto.

Using Personal Experience As A Springboard To Help Others