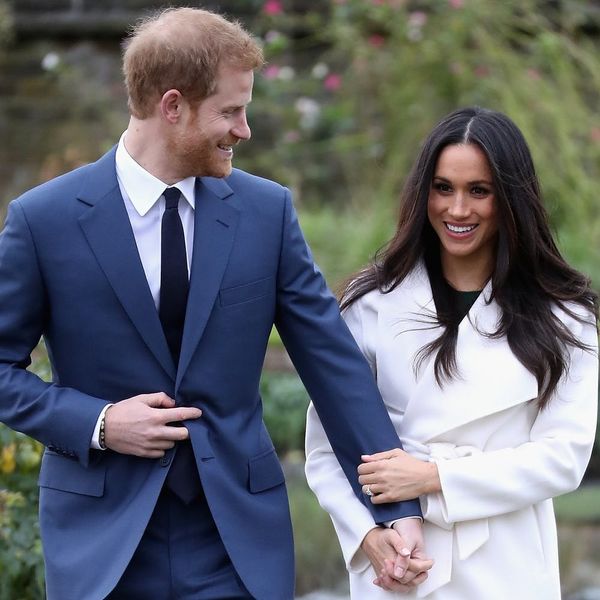 A fairy-tale romance come to life! In honor of Prince Harry and Meghan Markle’s engagement (and their spring 2018 wedding!), we’re taking a look back at how they met and fell in love, from their first date to their November 2017 engagement.

Markle spoke about her romance with Prince Harry for the first time in September, in an interview with Vanity Fair. Though she was careful not to reveal too many private details, the Suits actress did let readers in on the fact that they met in July 2016 through mutual friends in London. Prince Harry said he knew Markle was The One pretty much right away.

July-August 2016: They Take Their First Trip Together

In an interview after their engagement, Harry said he persuaded Markle to join him in Botswana just three or four weeks into their courtship. “We camped out with each other under the stars,” he shared, adding that the time away from their normal lives was “crucial” to make sure they “had a chance to get to know each other.”

By November 2016, news had gotten out that the two were dating, and a firestorm had erupted around Markle. With his girlfriend being harassed online and in the press, Prince Harry took the unusual step of releasing a statement about his personal life and his “girlfriend,” saying, “It is not right that a few months into a relationship with him that Ms. Markle should be subjected to such a storm… He knows commentators will say this is ‘the price she has to pay’ and that ‘this is all part of the game.’ He strongly disagrees. This is not a game — it is her life and his.” Chivalry isn’t dead!

December 2016: They Spend the Holidays Together

When the holiday season rolled around, the couple took things to the next level by celebrating together. Markle made her way over to England, where they picked out a Christmas tree at a local lot. They were then photographed together for the first time while heading out to attend a production of The Curious Incident of the Dog in the Night-Time.

January 2017: They Vacation Together in Norway

After spending New Year’s Eve in London, the lovebirds dashed off on a romantic getaway, heading to the remote town of Tromso on the Norwegian fjords, where they cozied up in a secluded cabin. The trip also included lake visits, whale-watching, spectacular sunsets in the snow, and the Aurora Borealis lights.

February 2017: They Engage in Their First Bit of PDA

On a night out at London’s Soho House (the very same spot where they were first introduced), Harry and Markle were photographed holding hands for the first time.

March 2017: They Attend a Friend’s Wedding in Jamaica

A few weeks after their romantic trip to Norway, the couple flew to Jamaica to attend a friend’s wedding, which resulted in some super-sweet pics of them hanging out on the beach. Harry even reportedly danced for his love at the event.

Markle attended her first public event with Harry in May 2017. When the prince participated in the Audi Polo Challenge in Ascot, England, she was there to cheer him on and even gave him a kiss after the match.

When Pippa Middleton married James Matthews, several members of the royal family — including, of course, Kate Middleton, who will soon be Markle’s sister-in-law — attended the wedding. The Suits actress wasn’t present for the actual ceremony, but she did partake in some of the later festivities. In fact, Harry made the super-romantic gesture of driving all the way to Kensington Palace to pick up his date after the nuptials in order to then take her to the reception, which was held at Middleton’s parents’ house 50 miles away.

August 2017: They Celebrate Her 36th Birthday in South Africa

When Markle turned 36 in August, Harry whisked her off to South Africa. Many suspected that the prince intended to propose there, due to the fact that his older brother, Prince William, popped the question to Kate Middleton on their own African getaway. But alas, no news of an engagement followed.

September 2017: She Opens Up About the Relationship in Vanity Fair

“I can tell you that at the end of the day I think it’s really simple,” Markle said during her interview with Vanity Fair for the magazine’s October issue. “We’re two people who are really happy and in love. We were very quietly dating for about six months before it became news. And I was working during that whole time, and the only thing that changed was people’s perception. Nothing about me changed. I’m still the same person that I am, and I’ve never defined myself by my relationship.”

September-October 2017: They Attend the Invictus Games Together

Prince Harry hosted the Invictus Games in Toronto, where Markle lived while filming Suits. Though the two sat separately during the opening ceremony, they watched a wheelchair tennis match together and also held hands in full view of the cameras outside the games. During the closing ceremony, they even indulged in a little kiss.

November 2017: She Reportedly Moves to London

Soon after Markle finished filming her final scenes on Suits, it was reported that she had touched down in London to officially move in with Prince Harry. According to E! News, movers packed up her Toronto apartment and shipped some of her things to London, where she was spotted doing some Christmas shopping a few days earlier.

November 2017: They Announce Their Engagement

Just days after Markle reportedly moved to London, the couple made the announcement we had all been waiting for: They’re engaged! Clarence House confirmed that Harry proposed to Markle a month ago, and that the two are set to marry in the spring of 2018.

What has been your favorite moment of Prince Harry and Meghan Markle’s relationship so far? Let us know @BritandCo!