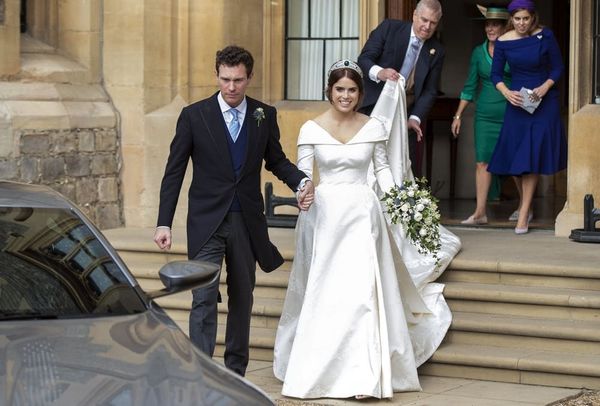 On Friday, October 12, Queen Elizabeth II’s granddaughter Princess Eugenie married Jack Brooksbank in a wedding at St. George’s Chapel, with plenty of celebrities and royal family members in attendance to celebrate the union. The ceremony was beautiful and romantic, but it was just the beginning of the festivities. Afterward, the couple and their guests moved on to a lavish reception, which will be followed tomorrow by even more wedding weekend activities.

Following their carriage procession through the streets of Windsor on Friday — for which they chose the Scottish State Coach — the newlyweds joined their friends and family at a lunch reception hosted by Queen Elizabeth II at Windsor Castle.

Guests including Demi Moore and Ellie Goulding listened to speeches from the wedding party and Princess Eugenie’s father, Prince Andrew, while enjoying a taste of the couple’s custom wedding cake. Designed by London baker Sophie Cabot, the autumn-themed creation featured a red velvet and chocolate cake covered with orange, red, yellow, and green leaves made of sugar. On the bottom layer of the cake, the couple’s initials were embossed in gold letters.

After the reception, the couple swapped their horse-drawn carriage for a super sleek Aston Martin DB10, which was designed and engineered in the UK for the James Bond film Spectre. According to People, their next stop was a black-tie evening reception at the Royal Lodge, the residence that Prince Andrew and ex-wife Sarah Ferguson share in Windsor.

But the fun doesn’t end there. On Saturday, guests will enjoy an afternoon festival-like event that will feature a fairground and food stalls. According to People, the event was put together by Bentleys Entertainment, which is the same company Victoria and David Beckham used when they were married in an extravagant wedding back in 1999.

What would your dream wedding reception include? Let us know @BritandCo!